Eight examples where an African president was succeeded by their son

This week, in awake of death of Chad’s president Idriss Dèby, the narrative that African presidents have resorted to grooming their sons to maintain the reigns within their families took shape again.

A few days after his death, Chad’s military council installed Mahamat Idriss Déby Itno, son of the fallen president, as the country’s new leader for the next 18 months after when fresh elections will be held.

Historically, this is not the first time Africa has witnessed father to son succession. Below, we bring you a list of African presidents who followed in the footsteps of their fathers.

37-year old Mahamat Idriss Déby Itno, the son of Late Dérby Idriss, President of Chad is currently the youngest head of State on the continent after taking over from his father who died of injuries days ago while battling rebels on the frontline. 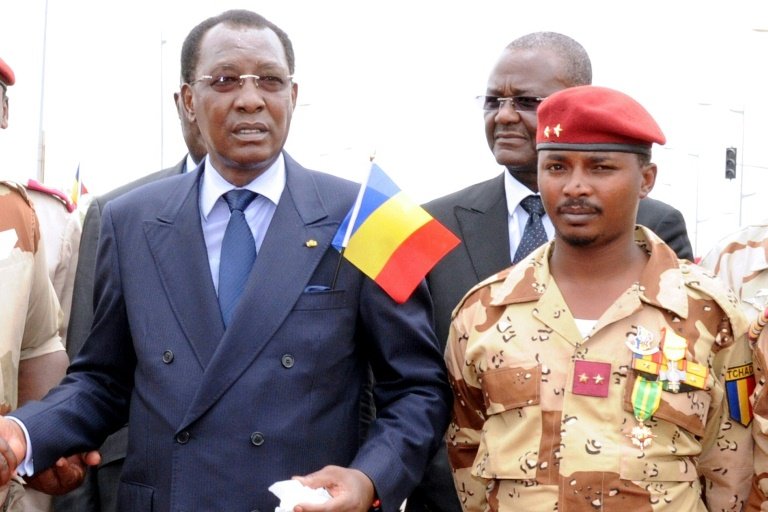 Déby, 68, who had been in power for 30 years was announced dead on state TV on Tuesday, a day after provisional presidential election results put him ahead in the race for his sixth term in office with 79.3%.

Following Dèby’s death, the constitution was abolished to form a military council which will take over in the interim, under the leadership of General Mahamat Kaka, otherwise known as Mahamat Idriss Déby Itno, the son of Idriss.

This government should remain temporary for 18 months until fresh elections are held and during the time, the four-star General will be serving as President of the Transitional government.

Battle hardened like his father, General Mahamat has played a leading role in the army since 2013 when he was appointed deputy head of Chadian forces taking part in anti-terror operations in Mali. He was also in charge of the presidential guard 18 months before Chad’s general elections and played a big role in securing his father’s sixth term.

Faure Gnassingbé, 54, became the president of Togo succeeding his father Étienne Eyadéma after the latter’s death in February 2005.

His father took over power in Togo through a military coup which helped Gnassingbé to enjoy some privileges during the time as first son. He graduated with a master’s degree in business administration from George Washington University in Washington, and upon returning to Togo, he was appointed as a financial adviser to his father.

Later, in what many believed was a grooming project to succeed his father, Gnassingbé was appointed Minister of Telecommunications, Mines, and Equipment.

When his father died in February 2005, Gnassingbé was named successor by the Military. His appointment was denounced by the international community for violating Togo’s 1992 Constitution and Gnassingbé bowed to pressure and stepped down.

He agreed a diplomatic election which he later won and was installed as president in May 2005. He was re-elected to presidency in March 2010.

Gnassingbé stood again in the February 22, 2020, presidential election in which he was declared the winner, taking more than 70 percent of the vote. He has been in Togo’s presidency for 16 years and analysts believe he is coming for another term.

49-year old Joseph Kabila served as President of Democratic Republic of Congo (DRC) between January 2001 and January 2019. Before assuming office, Kabila was part of the rebel group led by his father Laurent that ousted President of then Zaire, Mobutu Sese Seko in 1997.

When his father took over, Kabila was sent to China for additional training and upon returning, he was promoted to the rank of Major General, becoming the head of the country’s armed forces.

His father, Laurent was reportedly assassinated by a young member of his presidential guard in January 2001 in front of Generals he had fired days before.

Ten days later, 29-aged, Kabila was chosen to replace his fallen father. It remains unclear why the decision went that way but it’s believed his father’s senior advisers chose him because of his military leadership and his humble character . Later, 300 Members of parliament in the DRC passed a motion approving Mr Joseph Kabila as the new president to replace his slain father. Kabila would later rule the country for over 18 years (January 2001-Jan 2019).

Born February 1959 in Congo-Brazaville, Ali Bongo commonly referred to as ‘The Magician’ has been the president of oil-rich Gabon since October 2009.

He succeeded his father, Omar Bongo who had ruled the country for nearly 42 years.

Before joining politics, Bongo was a musician until he was convinced by his father to join politics. His father groomed him into an ambitious politician and by 1989, he appointed him the Foreign Minister. For the time leading to his father’s death, Ali Bongo led Gabon’s Defense Ministry.

Following his father’s death, Bongo expressed interest in assuming power even though many saw him as a ‘spoilt child’ who hardly spoke local languages given he was raised in France.

Despite his hip hop star appearance, Bongo received support within the PDG Party leadership and was fronted as the party representative in the Gabonese presidential elections in 2009. He won the election marred with irregularities with 42%. His victory was followed by mass protests in the country where many lost lives. Bongo again won his second election in 2016, which again sparked unrest across the country after the opposition led by Jean Ping disputed the official results. He has so far ruled Gabon for over a decade.

Nana Akugo is the current president of Ghana. He has been in office since 7 January 2017.

Similarly, his father Edward Akufo-Addo was one of the founding fathers of Ghana who engaged in the fight for Ghana’s independence and later becoming the Chief Justice (1966–70), and President (1970–72).

Before assuming office, Nana Akufo first ran for presidency in 2008 and 2012 but lost on both occasions to John Atta Mills and John Dramani respectively.

He pursued his presidential ambitions for the third time in 2016 on the New Patriotic Party and this time, he defeated John Dramani Mahama with 53.85% of the votes.

He again secured his second term in office after winning the 2020 general elections with 51.59% of the votes defeating John Dramani Mahama.

Uhuru Kenyatta, 59, has been the President of Kenya since 2013. His father, Jomo Kenyatta was similarly in the same position having served as Kenya’s first president from 1964 to his death in 1978. Prior to that Jomo Kenyatta had served as Prime Minister between 1963 and 1964.

Uhuru Kenyatta rose in the political scene in 2002 when then president Arap Moi appointed him Cabinet minister for local government. He was later elected as one of four Vice-Chairs of KANU.

In 2002, Kenyatta stood for Kenya’s presidency on KANU’s ticket but due to internal fights in the party, was defeated by Mwai Kibaki in December 2002.

In 2012 under multiparty alliance known as the Jubilee Coalition, Kenyatta contested again for presidency and won the first round of voting, held on March 4, 2013, by 50.07% against Raila Odinga, who garnered 43.31 percent. The court later upheld the election results, but Kenyatta was sworn in as president on April 9, 2013 after Odinga conceded.

In September 2017 presidential election, He was re-elected for his second and last term with more than 39.03 percent of the vote.

Khama Ian took over from Festus Gontebanye Mogae a Botswana politician who had served as the third President of Botswana from 1998 to 2008.

Before presidency, Khama a pilot by professional had served as the Vice President of the country.

Navinchandra Ramgoolam, was the Prime Minister of Mauritius from 2005 to 2014 and leader of the Labour Party. He followed footsteps of his father Seewoosagur Ramgoolam who served as the island’s first Chief Minister(1961-1968), Prime Minister (1968-1982) and Governor-General(1983-1985).

Navinchandra Joined politics as the country’s Leader of the Opposition from 1991 to 1995.

He assumed office as Prime Minister for the first time in December 1995 until September 2000, later becoming the Leader of the Opposition again from October 2000 to 4 July 2005.

On 5 July 2005, he became prime minister for a second term after his Alliance Sociale won the general elections. He served again as Prime Minister from 2005 to 2014, when he was defeated afterwards.

The military in Chad has claimed victory against northern rebels following weeks of fighting. The conflict against Libya-based rebels threw...