Robert Mugabe: A ruthless tyrant who presided over bloodshed and persecution

Robert Mugabe: A ruthless tyrant who presided over bloodshed and persecution

Robert Mugabe’s legacy as one of the most ruthless tyrants of modern times will remain long after his days as notorious statesman of Zimbabwe are over.

What could turn out to be the 93-year-old leader’s final night in charge of the troubled south African nation concluded in typically chaotic fashion with the army saying it had Mugabe and his ambitious wife Grace in custody following a takeover of the state broadcaster.

Tensions escalated after the first lady appeared to be positioned to replace Mugabe’s recently fired his deputy Emmerson Mnangagwa , leading many in Zimbabwe to suspect she could eventually succeed her husband.

The elderly politician’s second wife – after Sarah Hayfron died in 1992 – remained unpopular with some Zimbabweans because of her lavish spending , including in London’s plush stores, while many around her struggled against the country’s crippling economy.

Mugabe’s savage rule over Zimbabwe was dominated by murder, bloodshed, torture, persecution of political opponents, intimidation and vote-rigging on a grand scale.

He was the man who, in 1980, became the head of government of Zimbabwe, chosen to guide the country towards “democracy” after 14 years of rebellion against the Crown, headed by white Southern Rhodesian leader Ian Smith.

Much of Mugabe’s dirty work was carried out by his bullying henchmen, “veterans” of the guerrilla war against the Smith regime.

They attacked and often murdered white farmers, burning their homes, looting their possessions and confiscating their land, while his political opponents were often beaten, sexually abused and sometimes charged with treason and homosexual offences.

The economy of this mineral-rich country descended into chaos with thousands of people reduced to grinding poverty, many of them suffering from near-starvation and worse.

His relationship with ‘Anglo-Saxon unholy alliance’

Mugabe’s relationship with the Commonwealth, which he dubbed an “Anglo-Saxon unholy alliance”, was always stormy.

Zimbabwe was suspended from the Commonwealth in March 2002 after Mugabe was denounced for vote-rigging his own re-election.

During the Commonwealth heads of government conference a year later, he quit the organisation while member states were arguing about Zimbabwe’s future.

From school teacher to political detention

Robert Gabriel Mugabe was born on February 24 1924 in Kutama.

He was educated at Kutama Mission School and Fort Hare University and obtained degrees in correspondence courses with other educational establishments, including London University.

He worked as a teacher at various schools in Zimbabwe (or Southern Rhodesia as it was then) and in neighbouring countries.

Mugabe became publicity secretary of the National Democratic Party in 1960 and the following year was appointed acting secretary-general of the Zimbabwe African People’s Union, which was eventually banned.

He suffered political detention in 1962 and the following year co-founded and became secretary-general of ZANU.

Again he was sentenced, without trial, to political detention in 1964, but escaped in 1974 to Mozambique from where he led the armed struggle against the regime right up to 1979.

As leader, dissidence was met with violence

When, through Lord (Christopher) Soames, Margaret Thatcher brokered a deal in 1979 to end the Ian Smith rebellion, to everyone’s surprise, the Marxist Mugabe – with what was described as “a mix of conciliatory and intimidatory rhetoric” – became prime minister from 1980 to 1987. From 1988, he was president of Zimbabwe. 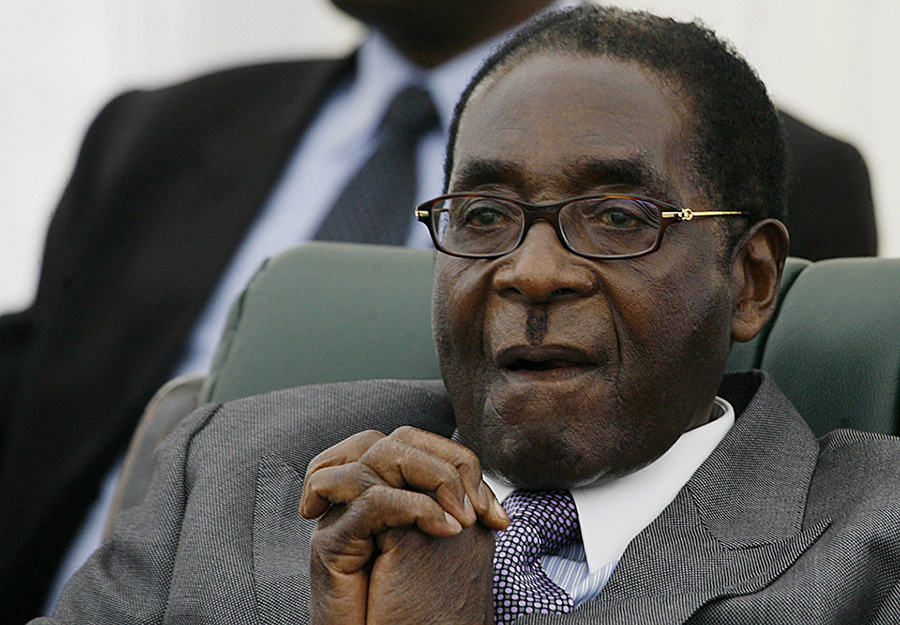 The new government, anxious to attract foreign investment, declared that white farmers were a welcome and integral part of the new Zimbabwe.

Then the land seizures took place. Plans to redistribute land peacefully were not working and ultimately the wartime “veterans” were sent in to dispossess the white farmers of their land, often violently.

In many cases, the fertile land went to wrack and ruin, leading to acute food shortages and a dramatic downturn in Zimbabwe’s economy.

Meanwhile, as Mugabe grew into his 70s he became paranoid. He believed his opponents were trying to kill him.

Political enemies were accused of homosexuality, and thrown into jail.

Peter Tatchell, the human rights campaigner, was assaulted by Mugabe’s body guards in 2001 when he tried to make a citizen’s arrest on the Zimbabwean leader.

The sanctions imposed on the country at one stage barred Mugabe, his family and supporters from visiting Britain.

But despite an EU travel ban, he was allowed to attend the funeral of Pope John Paul II in Rome in 2005.

While there he shook hands with the Prince of Wales, who was seated one place away from the president.

Clarence House said Charles was “caught by surprise” when Mugabe leaned over to greet him.

Any voice of dissidence was met with violence and, in the case of an independent newspaper, shut down

Under Mugabe, many humble Zimbabweans became billionaires, but ones on the brink of starvation and unable to pay for fuel because their money was worth so little thanks to stratospheric inflation.

In 2008 and 2009, the state’s central bank printed so much of its currency – the Zimbabwe dollar – that the country experienced hyper inflation that reached 500 billion per cent, according to the International Monetary Fund.

The result was that items such as a loaf of bread would often cost millions of Zimbabwean dollars.

Inflation was only brought under control when the government abandoned the Zimbabwe currency and used the US dollar as its main medium of trade.

Last year, this was replaced with a new currency called  bond notes.

As his dictatorial reign continued, many voiced their concerns about the power-obsessed leader. The then Archbishop of York, John Sentamu, cut up his dog collar on live television in a dramatic protest.

In 2008 Mugabe was stripped of his honorary knighthood, awarded in 1994, over his abuse of human rights and “abject disregard” for democracy, the Foreign Office said at the time. The Queen approved the annulment.

But he was admired by some. In late 2015 he was awarded China’s alternative to the Nobel Peace Prize, the Confucius Peace Prize, for what its committee called his inspired national leadership and service to pan-Africanism.

Mugabe had two sons and one daughter with Grace, while his first marriage produced one son who died.

Do not violate the constitution- Uganda tells troubled Zimbabwe