If you read between the lines, one can easily believe that the shillings seven million  a quarter is a statement from government to the sports sector

The old adage, ‘half a loaf is better than no bread’, makes sense until you read the letter the government sent to the president of the Federation of Uganda Basketball Associations on the 18th of June in response to the federation’s budget for next year’s calendar events.

A letter signed by National Council of Sports, NCS General Secretary Dr. Bernard Ogwel, and copied to the state minister of sport, the permanent secretary of the ministry of education and sports and National Council of Sports Chairman, clearly breaks down the justification for the money requested which totals to US Dollars 362, 163 (Approx Uganda Shillings 1.3 billion), as it does, the reasons why they won’t get even quarter of their budget. The breakdown included US Dollars 96,900 (Approximately shillings 344,585 million) meant for taking care of the senior men’s national team in the upcoming AfroBasket finals (which Uganda qualified for) in Kigali, Rwanda from 24th August to 5th September among other expenses.

According to Ogwel’s letter, the government has approved a budget threshold of shillings 18,368,214,000 to the National council of sports of which 10 billion is ringfenced for the Federation of Uganda Football Associations (FUFA). This leaves shillings 8,368,214,000. 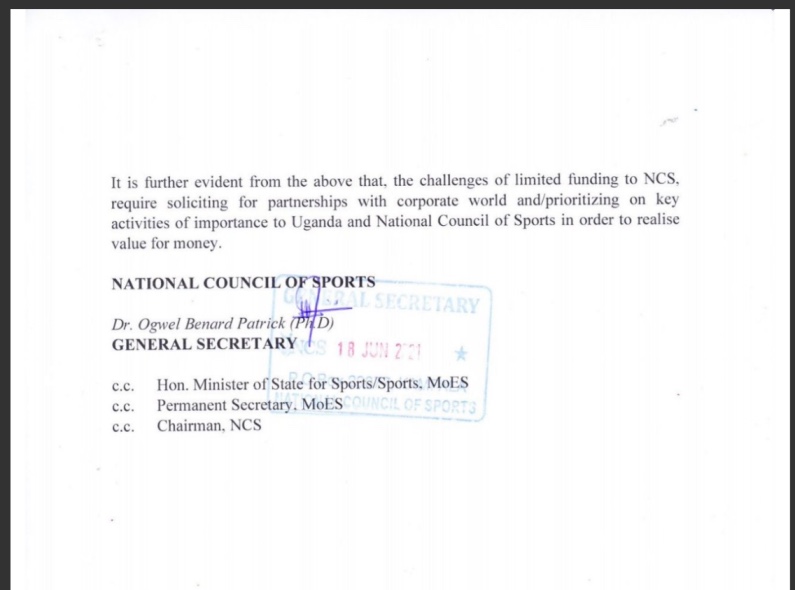 Of this, there is a recurrent budget wage for NCS Staff of 1,608,542,000 plus 1,638,773,000 earmarked for major international engagements like the commonwealth games, Olympics, Africa and East African games.

The remainder, a paltry 1,431,284,284 is what the remaining 50 national sports federations will share. When you do the math and divide this equally among each of the federations, each one of them will get 28,625,685.68 Million Uganda shillings.

Government money is usually released on a quarterly basis. Meaning each quarter, (every after three months) each federation will receive 7,156,421.42 Million Uganda shillings.

Break this down further to a month, and each federation will get shillings 1,789,105.355 per month. A figure that may not be even enough to rent a modest office space in prime Kampala.

This is what the government of Uganda, the country with arguably the youngest population in the world, deems deserving for the sports sector (never mind the existing economic challenges). A sector that only two days ago and for years before, has brought un quantifiable mileage and publicity to this country on the global stage.

Not that the sports sector is immune to the negative economic impact that Covid 19 has brought to Uganda, but was cutting this money to such disrespectful figures a solution, or adding a bigger problem to the already suffocating sports sector?

Clearly, to this government, the car comfort and ‘swag’ of a member of parliament is more important than the millions of youths who are talented in various sports disciplines country wide. Otherwise, the government would instead be touching these MPs’ shillings 200 million car allowances to save the nation from the shame of publicising such figures in the middle of a successful Olympic campaign. But again, when have they ever really cared?

This same government will give hundreds of millions of cash to individuals in the guise of talent promoters as compensation for assumed or actual losses due to covid 19 but will give seven million to a national federation to run its sports activities country wide for three months.

If you read between the lines, one can easily believe that the shillings seven million  a quarter is a statement from government to the sports sector. A polite way of telling the sector to go to hell. It is a middle finger to a sector that can potentially save half of the country’s youths from their unemployment misery.

The pinch of frustrating this very big sector will be felt by the future generations of young men and women who hope to forge a way out of our characteristic searing poverty through their God-given talents.

In an interview with Bernard Ogwel last Sunday on NBS The Score, he revealed that there are ongoing engagements to ensure that government reviews its financial contribution to the sports sector. This wasn’t the first time a government official was saying this, and certainly it won’t be the last, it is now the boring chorus to what has been a sad song of Ugandan sports sector for decades. Promises after unfulfilled promises to athletes.

Even if Athletics has evidently been Uganda’s most successful discipline for years, the construction of the high altitude training centre in Teryet is taking place at tortoise pace, because of endless excuses, yet it will take the same people in charge just hours to crush the sports budget to a nearly nothing.

One offs like Peruth Chemutai and Joshua Cheptegei will keep coming through because pain can actually be a motivation to a few strong-willed, but if our government has failed to appreciate and build on these good signs and strive to improve the conditions for athletes, then it is safe to plan Uganda’s sports funeral early, at least to accord this noble, innocent and beautiful sector a decent send-off in the near future.

‘Web Daniel Sebakijje is a Ugandan Journalist currently working with Next Media Services.