Airtel Uganda has been recognized by Uganda Blood Transfusion Services (UBTS) for rallying customers and well-wishers to donate blood across the country under their RED Campaign. The announcement was made during the World Blood Donor Day, a day celebrated annually on 14th June, with the 2021 theme held under “Give blood and keep the world beating”.

The recognition comes at a time when blood donation still remains a critical aspect of Uganda’s health care system. At the onset of the COVID-19 outbreak, blood donation drives received cancellations from gathering points such as schools, among other open public areas. This was intended to enable the public observe the Standard Operating Procedures (SOPs) issued by the Government and the Ministry of Health in curbing the further spread of the pandemic.

In October last year, Airtel Uganda collaborated with the UBTS to create awareness among eligible blood donors so that they can become lifelong donors. At the end of March 2021, Airtel had made a contribution of 1500 units of blood to UBTS.

Speaking on behalf of Airtel Uganda, Sumin Namaganda Musinguzi the head of Corporate Communications and CSR at Airtel Uganda, applauded UBTS for spearheading the blood donations drives across the country, and extending opportunities to corporate companies and Ugandans to partake in such noble causes that positively impact the society. 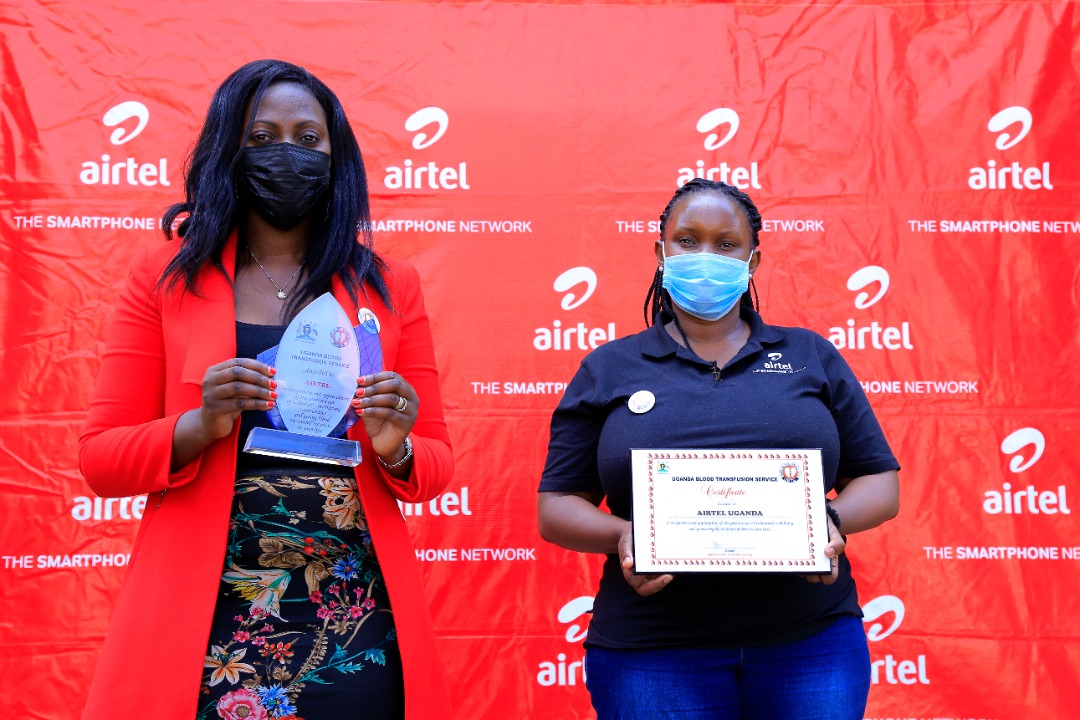 She further added, “I commend the team for working through the tough unprecedented times while observing the SOP guidelines to maintain safe, sufficient and accessible blood supply in spite of the widespread effects of the corona virus pandemic.”

During the recognition event, the UBTS Principle Blood Donor Recruiter and National Blood Donation Coordinator Mr. William Mugisha thanked Airtel Uganda for coming out every year to sponsor blood donation drives and most recently create awareness around the blood donation centers across the country where Ugandans can walk into to donate blood. He emphasized that now more than ever due to the pandemic and restrictions on social gatherings that were the most viable way of blood collection, it is crucial that we each become a mouth piece for the cause of blood donation and thanked Airtel for using their communications avenue to encourage eligible blood donors to donate blood.

“Donating blood can save a life, as blood is a precious gift and Airtel’s decision to create avenues for blood donors from all backgrounds to take part in the cause, gives an assurance of having the right blood available for patients who need it, given its increasing demand for maternal centers, cancer patients and all those who are undergoing surgery,” Mr. Mugisha remarked.

As part of the business’s Corporate Social Responsibility initiatives, Airtel Uganda has made it an annual endeavor to conduct blood donation drives. In 2014, Airtel launched the ‘BE RED’ campaign – an acronym for Be Responsible, Empathetic and Do it – to educate the public about the blood shortage in the country and encourage people to donate and save lives.

Since then, blood donation has been a major activity at the different Airtel Uganda health camps across the country. And at the same time, the company is continuing to create a wave of loyal blood donors who donate up to 3 times a year.