Uganda is just one of the many African countries that are stepping up preventive measures against the deadly coronavirus that started in China in December last year.

The World Health Organization (WHO) said that the outbreak has reached its “highest level of risk” to the world and can go in any direction according to WHO’s Director-General Tedros Adhanom.

Africa became the latest continent to confirm a coronavirus case when Egypt’s Ministry of Health announced on February 14, 2020. Last Tuesday, Algeria also announced a case, an Italian national who arrived in the country on February 17.

Nigeria became the first in sub-Saharan Africa and third on the continent when they announced a case on Thursday, February 27, 2020. Antarctica now remains the only continent where the virus has not yet been sighted.

WHO’s Regional Director for Africa, Dr. Matshidiso Moeti last week warned that the “window of opportunity Africa has had to prepare for coronavirus is closing,” but is Uganda ready for an outbreak?

The Ministry of Health has intensified preparedness in the country and according to the Minister of Health Dr. Ruth Aceng, they are set to open a shs2billion National Isolation Center in Entebbe.

The isolation center is to cater to suspected imported diseases and it is an extension of the old premises, which did not meet the international standards, set by WHO.

“With advice from WHO, a redesign of the entire isolation facility was undertaken and right now the contractor is trying to fix in what was missing,” Aceng told journalists on Friday.

According to Aceng, construction has been going on for the last six months and it will be ready to house patients should Uganda have any confirmed cases at least by next month.

Uganda also has other isolation centers in Naguru and Entebbe Regional Referral Hospital.

At the referral hospital in Entebbe, the administration boasts of over 20 staff trained to handle the outbreak and a fully-fledged ward with a 26-bed capacity.

“We have the equipment, we have respirators, we have three dialysis machines, we have patient monitors and supplies of oxygen,” Robert Mpanga, a senior administrator at the hospital said.

Mpanga said that they have also been taking their staff through several simulation exercises on how to handle cases need arises.

While addressing the press at the Uganda Media Center on Friday, Minister Aceng said that they had enhanced surveillance measures for all travelers from the virus-affected countries.

Screening at Entebbe International Airport and other points of entry like Malaba, Busia, Eregu, and Cyanika have been strengthened and deployment of additional health workers, equipment and infection prevention materials. 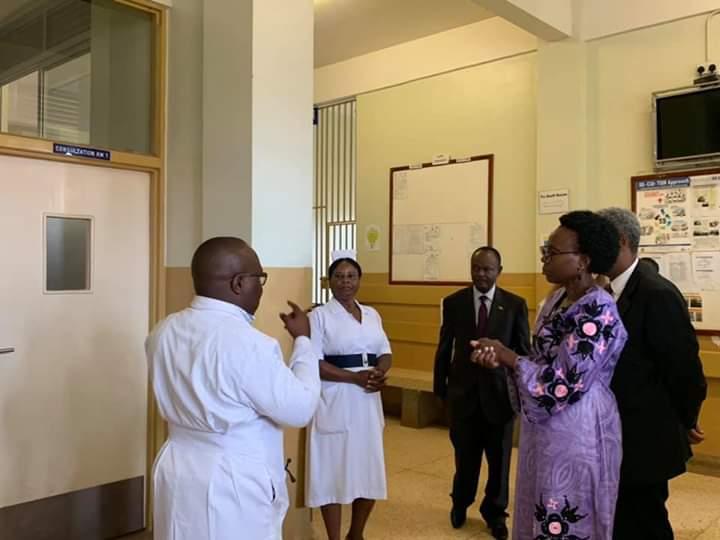 Minister Aceng on Friday revealed that 695 travelers including Chinese nationals and Ugandans who were returning back home have been isolated for purposes of follow up.

“488 are Chinese nationals, 64 other nationals while 143 are Ugandan citizens,” Aceng said.

280 individuals had concluded their 14 days of self-isolation by Friday last week.

Samples from 10 people who presented with signs and symptoms similar to that of the virus were tested but all these confirmed negative according to Minister Aceng.

Four other nationals, according to the Ministry of health presented signs of flu and cough and are currently being isolated at the Entebbe hospital.

Uganda remains with no confirmed cases of the virus but the risk cannot be ruled out.
The Ministry of Health advised against hugs, handshakes, contact with people who have flu-like symptoms and self-medication such as antibiotics.