Speaking about domestic tourism, the minds of many Ugandans will run to safaris and gorilla trekking in the Western part of the country, the River Nile in Jinja and some game parks in the North.

Its magnificent tourist attractions remain a mystery that is only known by the few who have spent a night there and perhaps the residents who spend their lives there to make the spectacle that it is.

The district prides itself in being the home to the mighty Sipi Falls and the extinct shield volcano in Mountain Elgon sits on the border of Uganda and Kenya.

When setting off from the capital city, Kampala, one should be ready to embark on a journey of at least 295 km.

On your way, you will encounter a number of unpaid-for tourist towns like Mukono District with its scenic view of tea estates, Lugazi – which is well known for its sugarcane plantations and Namawojolo.

At Namawojolo, your trip will not be complete if you do not take a break to refresh with the roadside roasted chicken, plantains and other various foodstuffs before the journey takes you to Jinja.
Jinja, which is arguably the main gate to Eastern Uganda and also commonly referred to as the adventurous capital of East Capital, hosts the Mabira Forest, the Source of the River Nile and the prestigious cable bridge.

From here, you’ll proceed through Iganga, to Mbale and then Karamoja.

Why you should visit Kapchorwa 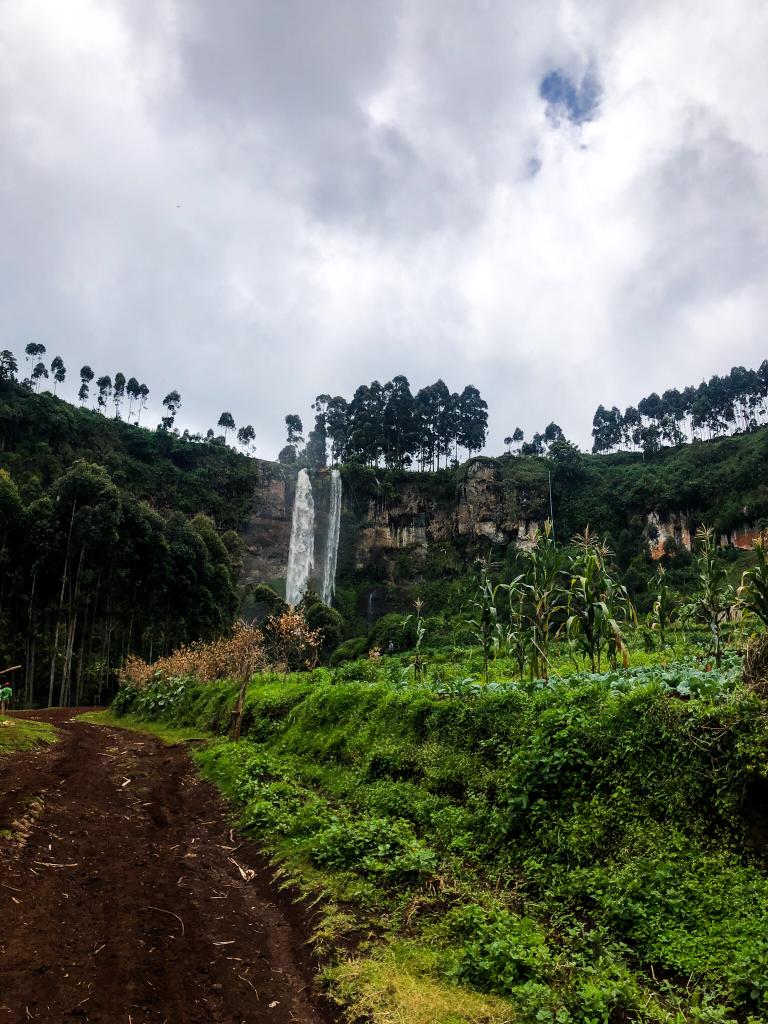 Kapchorwa is unique for many reasons and the experience varies for everyone. What stands out, however, is its warm days, cold nights and the mountainous nature which is not anywhere else in Uganda.

It is this mountainous terrain that has acted as a training ground for Ugandan Olympic gold and silver medalists like Joshua Cheptegei, Peruth Chemutai and Stephen Kiprotich.

There is even more… Despite being home to diverse communities, the people here live as one. What differentiates them is what brings them together.

The Sabinys are the largest tribe here, followed by the Pokots, Sebeis and some Nandi from Kenya whose native language is Kaksabin.
I bet you will be fascinated to see randomly designed huts, settling on different slopes of the hilly terrain.

You have not been to Kapchorwa if you have not taken the famous “drink from Kapchorwa” challenge. Sipi falls main waterfall covers up a huge chunk of the whole district.

For tourists, it could take about three to five hours of hiking and rotating around the green to reach the summit and take in the whole atmosphere.

For photography enthusiasts, Sipi offers you a very fine and instagramable scene to capture “fire” photos with half the effort. You will not have to try so much to find a perfect angle, as each take is an angle in itself.

Sipi has a thing for everyone, and for humanitarians that are interested in people and stories, you can take turns to do some community walks through the dotted homesteads that live here.

The rocks, caves and curves make up for everything that Sipi does not have.

The second waterfall has large showers with perfect spots for resting and relaxing off all the stress that one might have.

The third waterfall can be observed from anywhere in Kapchorwa, and you will not need to trek it to enjoy it.

The views from the slopes of Mountain Elgon are to die for, and there is no word to perfectly describe them. One has to be there to describe them for themselves.

Tour companies like Standard Safaris are available to take tourists on private tours in and around Kapchorwa at a modest fee. They are approachable through their website and social media handles.

The Singleton Challenge promises to bring the Oscars to the 19th hole as Season Six of one of the country’s...

I&M Bank Uganda joined over 80,000 participants in this year’s Kabaka’s Birthday Run at Bulange Mengo, on Sunday. The run...

With just a few days to the much-anticipated Guinness Bright House, activities around the event are in high gear with...