by David Omoding
in News

Kaligo stranded with his family outside the house. Photo by David Omoding.

A family of a person living with albinism in Kibuku District is stranded without shelter, nor food after an unidentified arsonist burnt down their grass-thatched house.

Gabriel Kaligo 46 and his wife Jesca Nanzala 41, residents of Nalubembe 1 village, Kibuku sub-county, are in a deplorable situation following the Saturday fire that razed down all their household properties.

The inferno which burnt everything also left the family savings of Shs50.000 cash all in ashes.

The couple is blessed with five biological children between the ages of 15, and 1 with the firstborn being a P.6 pupil at Nalubembe government-aided primary school.

Narrating his ordeal to Nile post at his home, Kaligo who has strayed from home to the bush, where he ponders how the future will be, looking frail said he was not at home at the time of the incident.

‘’I learnt of this unfortunate incident through my wife while returning from Merikit in Tororo District where I had gone to attend a free medical camp for persons living with albinism’’ he said as he wiped tears.

He said he thought maybe the children had accidentally torched the house, but his suspicion was allayed by his wife who told him that she was in the swamp with all children.

The family of seven has been living in one grass-thatched hut but currently, they have no option other than enduring cold and rainy nights under a tree. 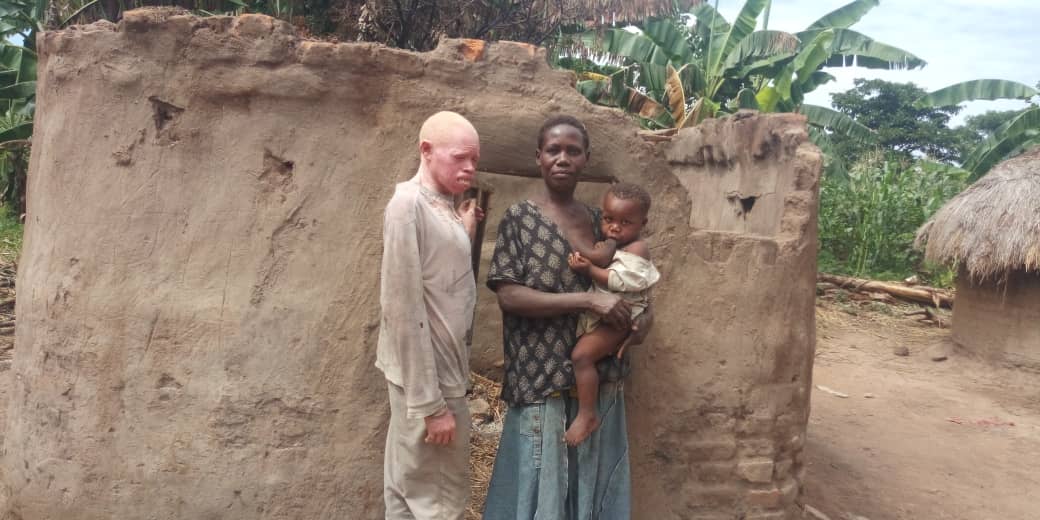 Besides his family, Kaligo is also taking care of Edinansi Kayendeke his 80-year-old widowed mother alongside 3 other children of his brothers.

‘’My days are now numbered, my son has been giving me food daily now I sleep on an empty stomach,” Kayendeke who says she’s not a beneficiary of 25,000 senior citizens’ grant from government laments.

Ms Nanzala says her family is facing acute starvation that she fears might lead to death if no one comes to their rescue.

However, a good Samaritan has initiated a fundraising campaign to raise funds to provide the suffering family with a simple shelter.

The assistant town clerk of Kibuku Town Council who doubles as the Director of Hope Union of Persons with Albinism (HUPA) in north Bukedi, Mr. Emmanuel Mutema also albinism has offered himself to take lead under a humanitarian campaign to mobilize funds from well-wishers to put up a small house for victims.

‘’I want to take this opportunity to call upon all well-wishers where ever they are to join me as we mobilize funds and resources to help this family get out from the calamity that befell on them’’ Mutema said on Monday,

Mr. Mutema said he is looking for about Shs5 million to construct a simple 3 roomed house for the family.

Patrick Mweru the LC 1 chairperson said the family needs urgent support as they have been more or less been abandoned by relatives because of albinism.

Matia Mujaasi a neighbor said he and other residents will offer free labor.

Mr Nakeba Muhamed the District Chairperson elect said he will follow up on the incident to establish the root cause of the matter.

He cautioned residents to desist from mistreating people living with albinism.

At least 250 students at Makerere University Business School (MUBS) have decried the abrupt lockdown that hindered them from going...