DR Congo to hold elections in 2023

The Uganda National Examination Board(UNEB) has questioned the authenticity of the academic documents Muhammad Ssegirinya, the newly elected member of parliament for Kawempe North, submitted for nomination.

However, we understand that one of contestants he defeated petitioned UNEB, challenging Ssegirinya’s documents.

In a letter dated March 17, 2021, Peter Anywar, writing on behalf of the executive secretary UNEB Dan Odongo, noted: “We have checked in our records and our findings are as follows; Candidate U005/054(2017) is Nampiima Sarah who sat at Mengo secondary school not Ssegirinya Richard sitting at Pimbas secondary school,”he noted.”

The letter added: “The candidate U005/754 is Nabadda Maureen who sat at Mengo Secondary school not Ssegirinya Richard at Pimbas secondary school.” 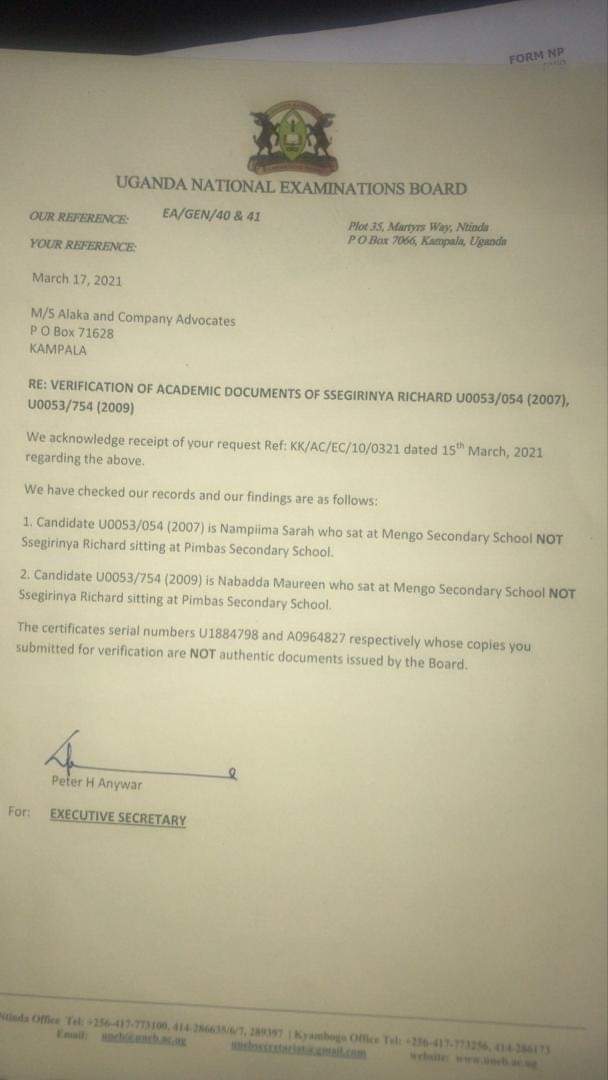 The Presidential Elections Act 2005, the Parliamentary Elections Act of 2005 and the Local Government Elections (amendment) Act 2005, require all prospective aspirants for positions of the President, Members of Parliament and district chairpersons to have completed a minimum formal education of advanced level standard by UNEB or its equivalent.

Ahead of the 2021 general elections, UNEB issued a circular to all the political aspirants to verify their academic documents.

The aspirants were required to submit copies of their certificates to be verified, an introductory letter from the respective schools, a copy of the National ID in addition to paying Shs 600,000 as verification fee.

Through his lawyers Alaka and company advocate,Ssegirinya who used the name of Ssegirinya Richard (he later converted to Islam) at the time submitted his academic credentials for verification.

This new development means that Ssegirinya’s election hangs in balance and if challenged in court, he could be thrown out.

President Museveni has said that the two districts of  Mubende and Kassanda have not recorded any new Ebola virus cases...

The State Minister for Ethics and Integrity Rose Lilly Akello has revealed that government has reawakened plans to have  a...

Police in Kawanda is looking for the armed driver of a UPDF Toyota land cruiser who allegedly shot and murdered...

Bits of ME A simple puncture of my car tire exposed a growing vice in our society that was revealed...

FDC’s Sam Mugumya to be resettled in Belgium