In a room full of Border Patrol agents, congressmen and members of his administration, Trump praised the progress made keeping people out of the country by way of the border wall in the area.

“The system is full,” Trump said of the nation’s immigration system. “We have to say, ‘We’re sorry, we can’t take you.’ We’re going to look at that and look at it very, very strongly.”

The president said people want to enter the U.S. for one of two reasons. “Part of it is because of the fact that the country is doing so well, and part of it’s just a scam,” he said. “People want to come in and they shouldn’t be coming in. Gang members, lots of others.”

Trump also reiterated his willingness to close the border with Mexico if Mexico does not block immigrants at its southern border. “But Mexico in the last four days has done more than they’ve ever done at their southern border,” he said.

Earlier Friday, Trump denied that he changed his mind about closing the U.S.-Mexico border, one day after apparently backtracking on the threat if Mexico does not act to halt the flow of illegal immigrants and drugs from entering the U.S.

“I never changed my mind at all,” Trump told reporters before leaving the White House for a trip to the U.S.-Mexico border. “I may shut it down at some point.”

During Trump’s visit, he was also expected to participate in a roundtable discussion on immigration and border security before touring a section of recently installed fence. His administration has described the fence as a “newly completed section of the promised border wall.”

The fencing in Calexico, which had been planned since 2009 and completed last year, is a replacement of a crumbling barrier that was constructed decades ago.

A metal plaque with Trump’s name on it is attached to the nine-meter-high fence Trump inspected. The plaque asserts the fencing is the first section of Trump’s border wall. 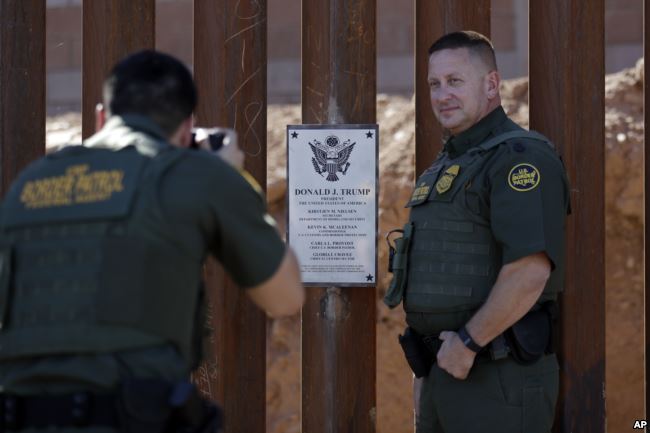 Trump had threatened for nearly two weeks to close the border, arguing Mexico was not doing enough to stop illegal immigrants and illicit drugs from entering the U.S. The president backed off those threats after advisers and some Republican senators urged him to do so, warning the effects could be economically devastating.

Trump instead imposed a one-year deadline on Mexico to stem the flow of immigrants and drugs into the U.S. or face a 25% tariff on cars it exports to the U.S. Trump delivered another threat to Mexico on Friday via Twitter, warning he is “looking at an economic penalty for the 500 Billion Dollars in illegal DRUGS that are shipped and smuggled through Mexico and across our Southern Border.”

Economists outside the government also predicted a border closure would have a dire economic impact.

“A full shutdown of the U.S.-Mexican border of more than several weeks would be the fodder for recessions in both Mexico and the U.S.,” Moody’s Analytics chief economist Mark Zandi said.

The Democratic-controlled U.S. House of Representatives, meantime, will sue to prevent Trump’s transfer of money to pay for the wall, Speaker Nancy Pelosi said Thursday. Trump declared a national emergency at the border in February to secure funds Congress refused to give him. The president vetoed House-passed legislation to terminate the emergency declaration, prompting the lawsuit.

“The President’s action clearly violates the Appropriations Clause by stealing from appropriated funds, an action that was not authorized by constitutional or statutory authority,” Pelosi said in a statement.

Trump leaves White House vowing ‘we will be back’

Donald Trump has vowed he will be "back in some form" after departing the White House for the final time...

Donald Trump’s farewell: We did what we came to do