When Idi Amin brought Britain, America to their knees; He only listened to Mobutu

Traveling the world today, many people across the divide keep asking you about specifically two people in Uganda, Presidents; Idi Amin Dada and Yoweri Museveni. Some will now add that Bobi Wine could have joined the league.

Those who ask about Museveni have known reasons, they have heard him the longest, while those asking about Amin have the inquisitiveness that comes with it; “That man Amin,” it is like they have heard a story too many a times about him and they simply want to verify it.

Amin left his mark as; tyrant, joker, achiever, brutal, etc. However, for the Asians, Britons and Americans, Amin left a very clear mark and we shall consider Britain and America today.

When Amin seized power in 1971, he was a darling of the British, having served in the colonial army and being better than socialist Milton Obote.

The conservative government of Edward Heath, then Prime Minister for Britain, was the first to welcome Amin as a relief from Obote, a leftist and critic of Britain. Amin took a picture with Heath and placed it prominently at his home.

The Queen Elizabeth also time and again expressed her ‘love’ for Amin referring to him as a ‘very good friend’, even in letters she wrote to the Ugandan leader.

However, several months later, Amin’s romance with Britain ended when the former expelled Asians from Uganda, many of whom ended up in Britain. He would soon add to his many titles another; CBE (Conqueror of the British Empire), hence being, Field Marshal, Alhaji Dr. Idi Amin Dada, VC, DSO, MC, CBE.

This was not any different from America, they loved him but soon would loathe him.

How the fall out shaped up 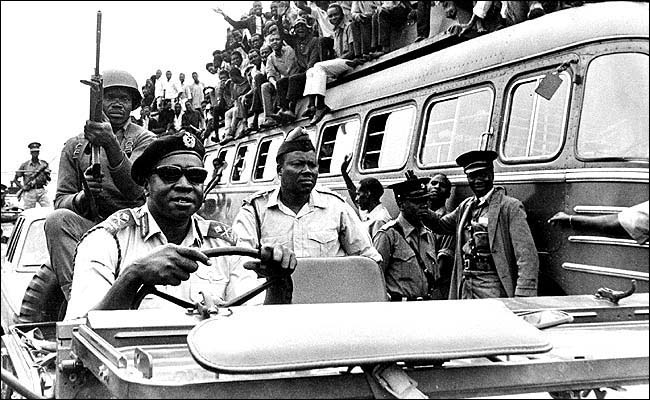 Amin’s squabble with America started when out of anger he ordered for the closure of the US embassy in Uganda in November 10 1973, that the Americans had to celebrate the marine anniversary from Nairobi.

During the time the American embassy was in the hands of Deputy ambassador Robert Keeley after his boss was recalled months earlier (in February).

Although Keeley reiterated that he had figured Amin was a bully, coward, and would only threaten, he agreed the “state department in Washington panicked because they took him very serious.”

The very few threats Amin made is when he said he would arrest all Americans in Uganda.

Keeley said during an interview with media that indeed Amin managed to beat America for some time “at least verbally”.

Amin in reply said he didn’t really like American president, Jimmy Carter because he did not understand him but added he wanted them to be good friends since in politics “there are no permanent enemies or friends.” He also added that he had no intention of detaining any American citizens and even added; “He (Carter) will be my best friend one day.”

Amin’s never had time to reconcile with the Americans until he was overthrown.

Amin also picked a quarrel with his bosses Britain, the climax of this fight coming after the arrest of Denis Hills, a British author, teacher and adventurer, in June 1975.

Hills, a lecturer at Makerere University since 1963, had written a book in which he condemned Amin’s rule and labeled him a “Black Negro” and “Village Tyrant”. The Briton had expected to be out of the country by the time the book was published, however Amin’s forces raided Makerere and arrested Hills.

Hills was tried in a magistrate court in Kampala and all charges were dropped but Amin personally interfered and ordered the Briton be tried in Military tribunal where he was of course found guilty of espionage and sedition hence, sentence to death by firing squad at clock tower in Kampala, within 12 days.

With Hills staring at his death, a post colonial game between Britain and Uganda ensued, the British writer would only be let loose if the Queen apologised to Idi Amin and Britain showed that Amin was indeed king.

This was made worse by a press conference in which Amin stated: “Any British citizen who is here against me or against the people of Uganda will face the law of the country.” The British knew Amin was not making an idle threat.

So Queen of Britain Elizabeth herself wrote to Amin asking for clemency but Amin looked the other way. In the end Britain had to bend, Lt-Gen Sir Chandos Blair and another of Amin’s former commanding officers were sent out to seek Amins mercy albeit unsuccessfully.

Amin was holding on Hills as a pawn to humiliate the colonial masters which he indeed achieved as later Britain sent their Foreign Secretary, James Callaghan to plead with and also promise to review aid to Uganda which Amin accepted, but first, the entire delegation that included two British Army officers (according to Radio Uganda) had to approach Amin “on their knees.”

Amin then at about 12:00am, jumped into his chopper and headed to prison where Hills was kept, he laughed wildly at him before telling him: “You are a bad journalist.”

After several wild laughters and wigging towards Hills, Amin personally set him free telling him the only reason for his freedom was because; “I love the Queen.”

On July 1, 1975, Aminhad announced while on a working visit to Zaire that he was granting pardon to Denis Hills at a news conference after conferring with President Mobutu Sese Seko, who interceded in the case.

Amin told journalists that he had decided to respond favorably to General Mobutu’s intervention. Amin added that he had asked General Mobutu to act as a mediator between himself and the British Government in all British‐Ugandan relations.

By Samali Kisakye After ticking its last at the end of a long life, Kampala’s clock in the landmark clocktower...

Part 8: Mutesa finds trouble with Obote even in death as gov’t seeks to ‘snatch’ his body from UK