OPINION: Museveni does the heavy lifting for peace; Ethiopia’s Ali gets the Nobel Peace Prize for nothing!

OPINION: Museveni does the heavy lifting for peace; Ethiopia’s Ali gets the Nobel Peace Prize for nothing!

There are several sound reasons why Uganda should stay out of the civil war in Ethiopia.

Museveni does the heavy lifting for peace; Ethiopia’s Ali gets the Nobel Peace Prize for nothing!

“Man’s worst sin is, he does too much good! Who, then, dares to be half so kind again?” William Shakespeare wrote in the tragedy of ‘Timon of Athens’.

I could be forgiven for thinking the immortal British poet and dramatist was warning Museveni not to get involved in the current Ethiopian civil. (Uganda, Ethiopia agree to strengthen bilateral ties, Nile Post, 30th August 2021).

Instead, Museveni should echo the recent UN Security Council counsel that ‘there is no military solution to the war, and advise Mr Ali to negotiate his country out of the slippery slope towards mutually-agreed-destruction (MAD) on which it seems settled. https://www.un.org/press/en/2021/sgsm20866.doc.htm

Mr Ali, who opened Pandora’s box last November, is now facing multiple tribal uprisings in the north, east, south, west and centre of his country. No one can successfully fight battles on several fronts at once.

Despite the diplomatic weasel words issued from the State House, that the meeting was about “cooperation in bilateral, regional and international issues of common interest”, The Nile Post, with its ears and nose ever on the ground, came very close to confirming what diplomats and keen observers are suspecting about the real reason for Mr Ali’s visit:

“The meeting comes at a time when Ethiopia is grappling with major humanitarian crisis caused by insurgency.”

It is a supreme irony for Mr Ali, a Nobel peace laureate, to come seeking advice from Museveni, a no-body in Nobel Peace-speak.

It is Museveni, who should have travelled to Addis Ababa to consult Ali on how to handle the increasing incidents of unexplained and unresolved murders that are rocking Masaka sub-region.

In statement that surprised the world, the Norwegian Nobel Committee announced three years ago, it “has decided to award the Nobel Peace Prize for 2019 to Ethiopian Prime Minister Abiy Ahmed Ali for his efforts to achieve peace and international cooperation”.

Even the Committee itself was surprised, adding in their statement, “no doubt some people will think this year’s prize is being awarded too early. The Norwegian Nobel Committee believes it is now that Abiy Ahmed’s efforts deserve recognition and need encouragement.” https://www.nobelprize.org/prizes/peace/2019/press-release/

Contrast Mr Ali’s vaunted record on peace-making with Museveni’s unrecognised string of positive achievements at home and across Africa, where he has spent almost half a century risking his own life, fighting to establish and keep peace. 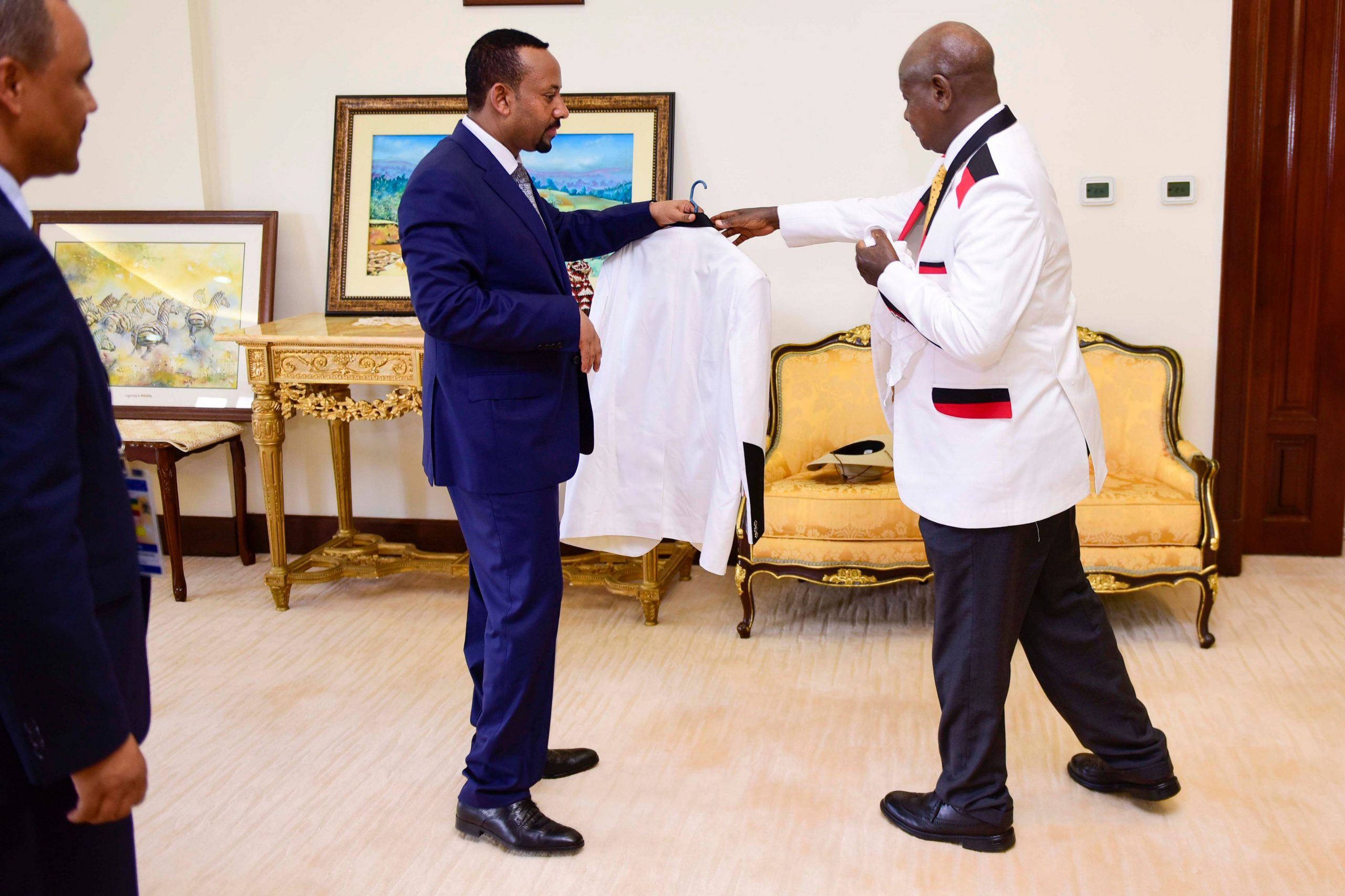 For example, he fought with the Frente de Libertação de Moçambique, (FRELIMO) guerrillas to bring independence to Mozambique.  He fought against Idi Amin and Milton Obote. He helped Rwandan Refugees to go back to their own country after decades in exile.

He has sent Ugandan troops to make and maintain peace in the DRC, Central African Republic, South Sudan, Somalia and Equatorial Guinea. Many brave Ugandan soldiers have paid the ultimate price in the process, leaving behind countless and helpless widows and orphans.

The recently deceased Lieutenant General Lokech, who had fought in most of these wars.

There are several sound reasons why Uganda should stay out of the civil war in Ethiopia.

We have more than enough confounding problems to contend with: domestic terrorists are terrorising Masaka region, regional terrorist ADF are operating across our western border and South Sudan in the north remains unstable with frequent incursions and refugee influx.

Covid is ravaging the economy, children are marooned at home, the national debt is sky-rocketing; thus forcing the government to impose ever crippling taxes on businesses and consumers.

Moreover, the Norwegian Peace committee, which has never been impressed with Museveni’s contributions to peace all these years, is unlikely to be impressed tomorrow if he sends troops to Ethiopia.

In any case, the UPDF risks becoming the latest cannon fodder to Tigray fighters, who have a long and unbroken record of humiliating their “invaders”.

They have recently defeated the Ethiopian national army, previously considered one of the largest and strongest in Africa, killing or capturing and parading thousands of soldiers on the streets.

They are now steadily extending their defence lines deep into neighbouring Amhara and Afar regions.

They fought and defeated the Soviet-backed Derg regime of Col Mengistu Haile Mariam in a 17 year- long guerrilla war from 1974-1991.

Twice, they defeated the mighty Italians in 1895–1896 and 1935-1936. ‘Alula Aba Nega’ airport in Makele, and a city stature bearing the same name stand as monuments to the man who lead the wars against Italians, and inspires the subsequent Tigray warriors today and tomorrow.

Claiming to be descendants of King Solomon and host to the original Tablet bearing the Ten Commandments, their greatest weapons are the inhospitable terrain waiting for invaders, and their unmatchable determination to survive as a people.

Oh, Tigrayans have also defeated and pushed back the Eritrean national army, unaccountably and unwisely drafted into the civil war by Mr Ali.

And, as a bonus, last week, the US imposed sanctions on the Eritrean army chief, General Filipos Woldeyohannes (Filipos), “for being a leader or official of an entity that is engaged in serious human rights abuse committed in Tigray.”

Is this another prospective cost Museveni is ready to pay for the privilege of getting involved in Ethiopia where the UN has warned there is no military solution?