Oledo leads others in kneeling.

The former Uganda Medical Association (UMA) Dr Ekwaro Obuku has lavished praise on his successor Dr Samuel Oledo for leading fellow doctors in kneeling before President Museveni over the weekend.

Dr Oledo over the weekend led a group of medical practitioners in a verbal petition to President Museveni, pleading with him to run for office in 2026.

This happened during the Youth Patriotism Symposium at Kololo Independence Grounds in Kampala.

Dr Oledo and group, clad in white medical gowns took to the floor, collapsed on their knees and pleaded with the president while telling him that they have made enough medical research and deduced that he is still fit to run the country for many more years.

“Your excellence, thank you for uplifting us, but now we are requesting you, we have already assessed as doctors that you are still very able, now we beseech you to help us and run again for office so that you are able to secure the future of this country,” Dr Oledo roared on the mic.

Dr Oledo’s actions were despicable to a number of people on social media, who castigated the doctors for playing cheap politics.

President Museveni also on his part asked the group to avoid engaging in politics, dismissing their theatrics as “it is not yet time for politics”.

Speaking on the same actions, Dr Obuku another critic of President Museveni said Oledo did nothing wrong and he supports him 100 per cent. 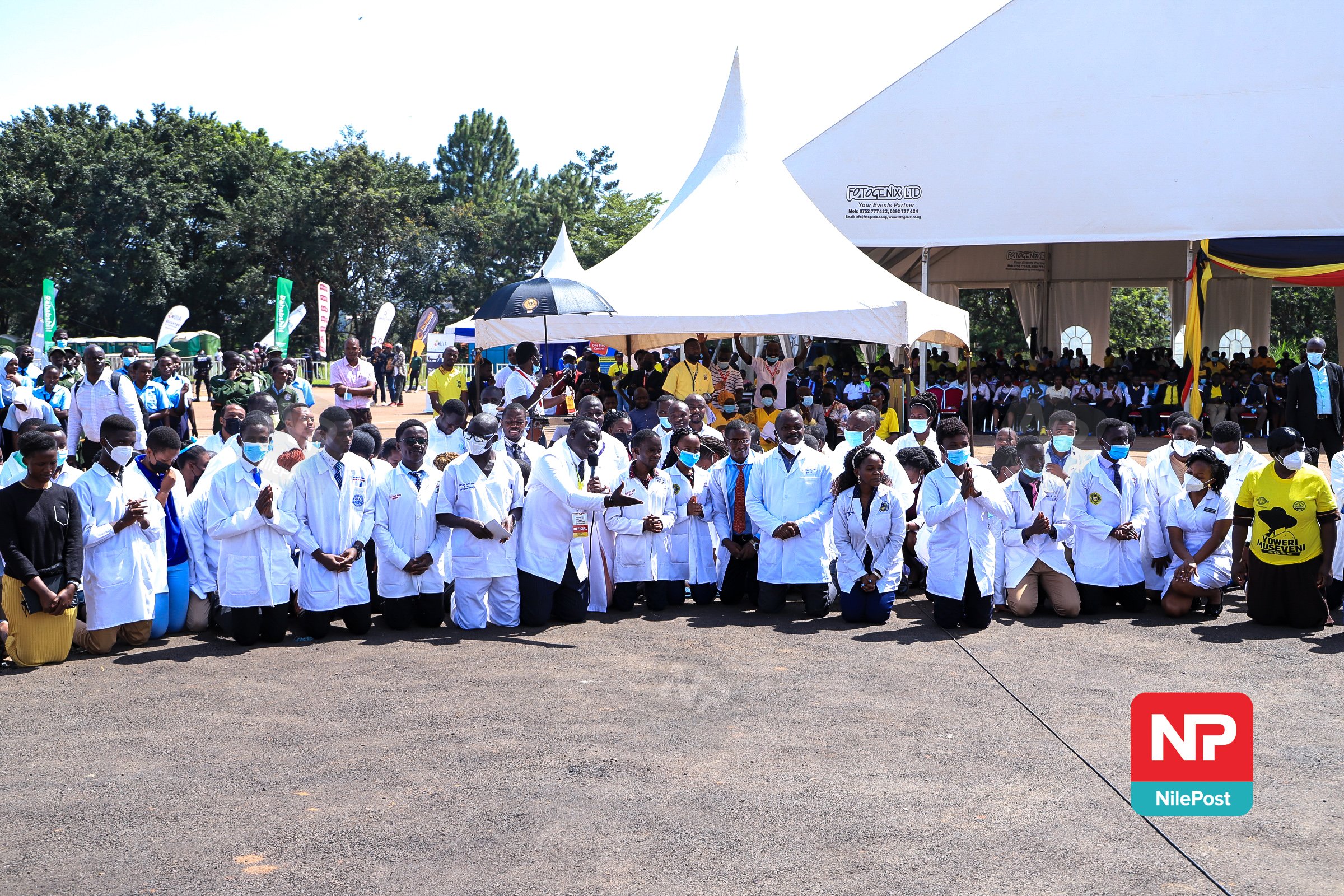 “Kneeling down is culturally acceptable in Uganda, women and men kneel down in Buganda, in Acholi men kneel down while marrying, so I do not see anything wrong with what Dr Oledo did,” Obuku said.

Dr Obuku maintains that Dr Oledo is a political son of President Museveni having been educated by the president, he is also the chairman of the youth in his village and as well as an NRM card-bearing member, and contestant of the vice chair of Northern Uganda against Jacob Oulanyah hence was in the right place.

“I support a leader who works with government to fulfil its pledges to their people. If that’s the strategy he has decided to employ, it is up to him as a leader and I support him,” Dr Obuku said.

He said he was on a phone call with Dr Oledo who explained the circumstances surrounding the action, adding that Dr Oledo said he had had a number of fights with president Museveni previously, many of which have come out positive. He, therefore, attended the symposium and chose to appreciate him for what has been achieved so far.

“Indeed, President Museveni has fulfilled many of the pledges, we have the salary he promised, we are just left with one thing, the tools for use, but other aspects of the human resource have been handled by the president. I called Dr Oledo and he said he was excited and he did not want to ask the president again, so he chose to appreciate him,” Dr Obuku said.

He said those castigating Dr Oledo are indeed doing so because they do not support the NRM understandably.

“We (UMA) stood with Bobi Wine when he was tortured, when Besigye was arrested, we visited him as a colleague, so we have taken part. But everyone is against Oledo because many of the elites do not want to associate with the party, some of them only during the day,” Dr Obuku noted.

“As doctors, we should participate in government programs and support. He ( Dr Oledo) did very well, he brought us back to the agenda as doctors, it is a political dispensation, he has done 100 per cent to put doctors on the agenda,” Dr Obuku added.

It should be remembered that Dr Oledo was initially vocal regarding the government’s inability to solve the pertinent issues of doctors and medical practitioners.

However, earlier this year, the vocal Oledo expressed interest to run for office in the East African Legislative Assembly (EALA) polls on the NRM ticket, asking President Museveni to forgive him for causing a “headache” before.

Nonetheless, Museveni and the NRM CEC chose to proceed with the initial six representatives, leaving Oledo and others grumbling in cold.

The National Social Security Fund has defended its performance over the last 10 years before parliament. The NSSF senior management...