Museveni: Why I promoted Muhoozi Kainerugaba

I am sorry for Muhoozi’s tweets- Museveni apologises to Kenya

The Chief of Defence Forces in the UPDF, Gen Wilson Mbadi has challenged the newly appointed commander of the Special Forces Command, Brig David Mugisha to scale new heights in his new position.

The Chief of Defence Forces in the UPDF, Gen Wilson Mbadi has challenged the newly appointed commander of the Special Forces Command, Brig David Mugisha to scale new heights in his new position.

President Museveni last week appointed Brig Mugisha as the new SFC commander to take over from Brig Busizoori who was sent to Moroto as the deputy commander of the third infantry division of the UPDF in an appointment that saw the two senior officers swap positions.

Speaking on Tuesday during the handover and take over  at the SFC headquarters in Entebbe, the CDF  applauded the outgoing SFC commander, Brig Busizoori for achieving a lot in a small time that he has been in office but at the same time challenged the new commander to scale greater heights.

“Continue where he left to build capacity of this elite force by continuously looking at its mission against the required equipment and personnel. Continue researching on dynamic situations to match the relevance of the Special Forces Command. Training is a priority which improves soldiers’ proficiency, effectiveness, professionalism as well as increasing their level of patriotism,” Gen Mbadi said. 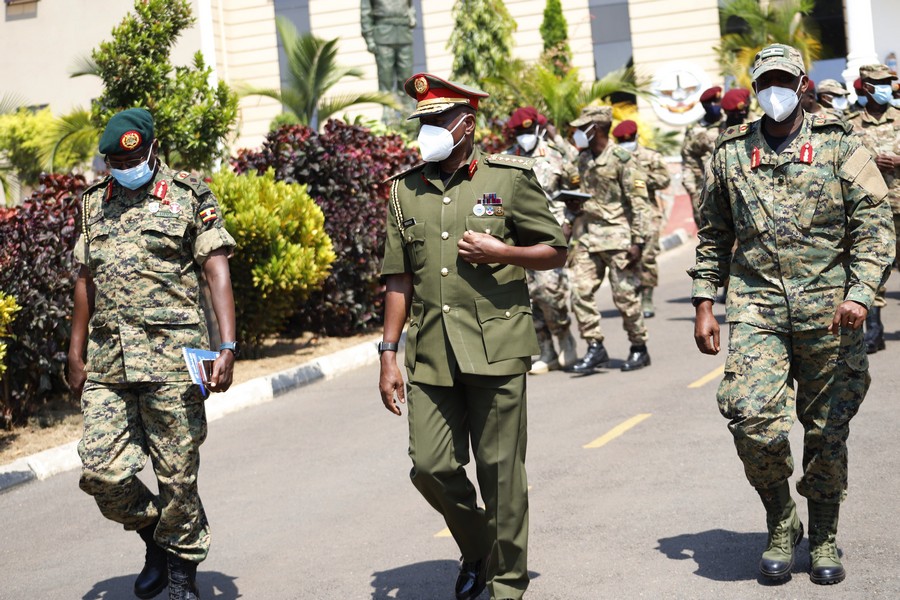 The CDF asked the new SFC commander to always apply revolutionary methods of work that he said are a big pillar in the management of the forces but also tasked him to pursue pending tasks left behind by his predecessor.

“I urge every officer and man in SFC to give Gen Mugisha the necessary support to help take SFC to the next level so that this service of the UPDF can remain cohesive. This cohesiveness is key and you can only ignore it at your own peril.”

“To the new commander and other leaders, you have a task to groom other leaders to ensure there is no vacuum left in the leadership ladder. In simple terms, help others go up. Let us all contribute to the interests of the country by making it stable and peaceful to spur economic development and transformation.”

Ready for the task ahead

In his acceptance speech, Brig Mugisha said he is ready to take the mantle of the Special Forces Command as the new commander of the elite service of the UPDF.

“I can only pledge total loyalty to the commander in chief , the army leadership, the UPDF and the country at large. I will keep the standard of the Special Forces Command by having a well-trained force, agile, effective, efficient , versatile, dynamic, professional, productive, pro-people and ideologically oriented force to meet national, regional and global challenges,” Brig Mugisha said.

The Special Forces Command is an elite service of the UPDF responsible for the security of the President of Uganda and members of the first family.

The Special Forces Command, a service of the UPDF according to its website says it is a specialized component of the UPDF tasked to carry out special missions in support of national military objectives.

“To develop and operate a powerful and versatile special operations force that is situated within the unique Ugandan way of war and is responsive to the requirements of the UPDF and the nation,” reads in part the SFC mission.

To this, the SFC is described as a special purpose military formation trained and organized to employ tactics in often denied or hostile environment is doing special operations

The service also carries out special missions both within and outside the country to complement the UPDF like it was deployed in Somalia to help fight Al Shabaab snipers who were killing Ugandan soldiers.

Brig David Mugisha is the third commander of the SFC in a period less than one year.

NRM spares no expense to win by elections

Members of Parliament have faulted government for failure to implement policies and laws aimed at mitigating the effects of climate...

Buganda Road magistrate’s court in Kampala has remanded to prison, nine university students for allegedly protesting against the East African...

The Minister for Science, Technology and Innovation Monica Musenero has said government has started the process of investing massively in electric...