It’s time for Africa to get reparations – Ghana president

It’s time for Africa to get reparations – Ghana president

Ghana’s President Nana Akufo-Addo has said the payment of reparations to Africans for the damage caused by the slave trade centuries ago is “long overdue”.

In a series of tweets he re-iterated a speech he made at a summit on reparations and racial healing that laid out the case for money to be paid to the continent.

“It is time for Africa, 20 million of whose sons and daughters had their freedoms curtailed and sold into slavery, also to receive reparations,” he said. 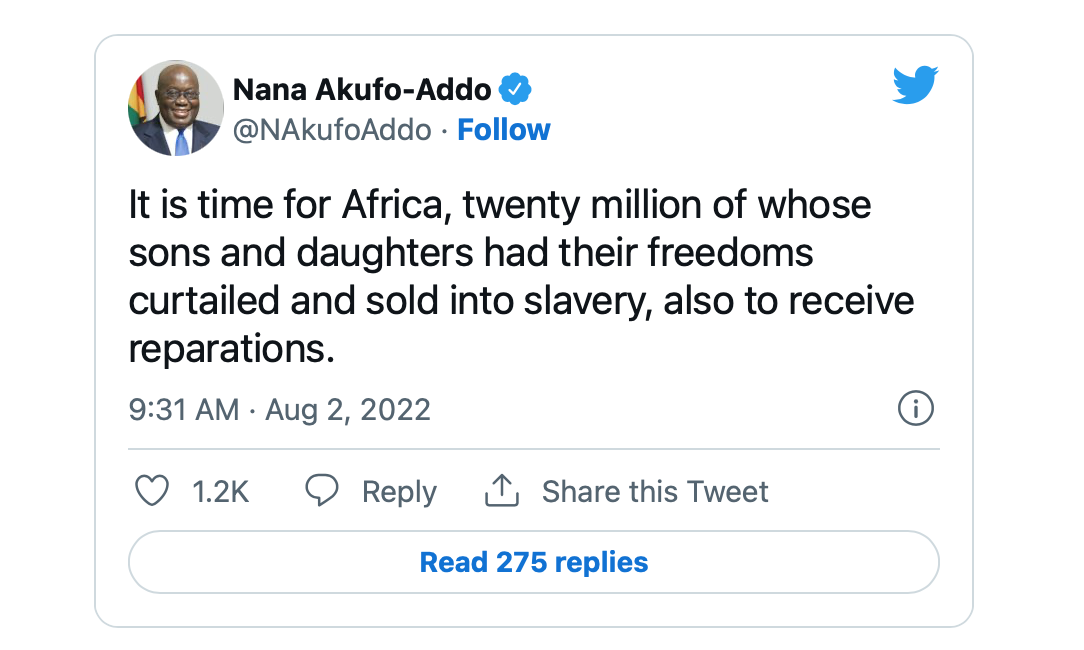 The Ghanaian leader said the slave trade’s effects were “devastating” to the continent and the diaspora and that the entire slavery period stifled “Africa’s economic, cultural and psychological progress”.

The transatlantic slave trade, which affected millions of Africans, was the largest forced migration in history and one of the most inhumane, according to the UN.

The exodus of Africans was spread to many areas of the world over a 400-year period.

The Ghanaian leader said the the subject of reparations “becomes a debate” only when it comes to Africa and Africans, noting that the so-called owners of enslaved Africans had received reparations.

He also cited Jewish survivors of the Holocaust as having received reparations, as well as native Americans “who have received and continue to receive reparations”.

Besides the reparations, he said “entire continent of Africa deserves a formal apology from the European nations involved in the slave trade for the crimes and damage it has caused to the population, psyche, image and character of the African the world over”.

He urged the African Union to engage the diaspora to advance the reparations cause. 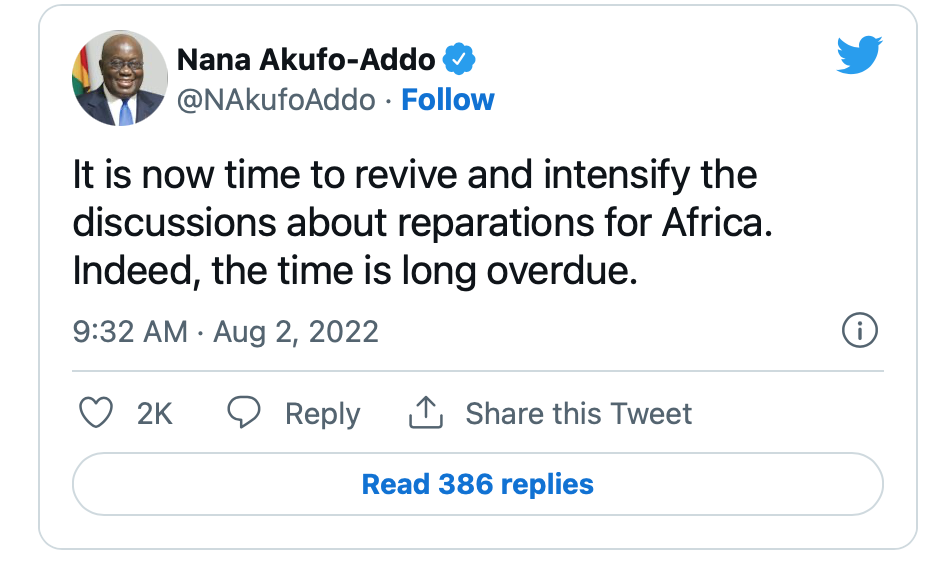 Ghana was one of the points of departure for many of those enslaved in West Africa.

Tips: How to stay alive during the rainy season

The minister of State for Agriculture, Bright Rwamirama has said the national agricultural show provides a platform for local and...

Police in Mukono district are investigating how a 28-year-old man managed to enter Our Lady Secondary School girls' dormitory and...

Senior police officers recently promoted by President Museveni have said the elevation has helped wipe away their tears, having waited...

The leader of the National Unity Platform (NUP) Robert Kyagulanyi alias Bobi Wine has said by arresting their Member of...