PICTORIAL: Live bands steal the show at Roast & Rhyme on the Nile

The office of the Senior Presidential  Advisor on Diaspora Affairs has extended a helping hand to more than 30 Ugandan migrant workers who were stranded in Saudi Arabia to return home.

The office of the Senior Presidential  Advisor on Diaspora Affairs has extended a helping hand to more than 30 Ugandan migrant workers who were stranded in Saudi Arabia to return home.

The development came following a tour to the Gulf region  by the Senior Presidential  Advisor on Diaspora Affairs  Amb. Abbey Walusimbi aimed at familiarising himself with the dynamics of the living and working conditions of Ugandan migrant workers .

While in Saudi Arabia, Walusimbi alongside the Presidential Advisor  on Political Affairs, Mary Kawuma met and interacted with more than 500 distressed migrant workers, who shared stories behind their plight.

This prompted Walusimbi to instruct the heads of the shelters, where the girls with genuine challenges spend sometime to have them processed to return home with immediate effect.

Juliet Nabbanja, one of the girls who was rescued said  she had been ill treated by her female employer exposing her to life threatening chemicals and deliberately infecting her with Covid 19 before running for her dear life.

During the tour, most issues raised by the girls were related to being forced to work in different family and friends’ houses without their consent, harsh treatment by their female employers, denying them decent meals, working beyond 15 hours, sexual harassment from some male employers and their relatives and delayed or no payment of their salary dues among others.

While visiting the different recruitment offices and their accommodations,  Amb. Walusimbi and his team met a  number of girls who allegedly had failed to work after serving less than a year of their contracts owing to non-medical health conditions which are not  provided for in their contracts.

It was however agreed that arrangements  be made to bring the girls  back through the companies that recruited them.

Walusimbi also highlighted the need to increase funding to the Ugandan Mission in Saudi Arabia noting that although the embassy is renting a house to accommodate the distressed nationals, it’s practically struggling financially to maintain the costs involved because they have no budget allocated for this.

“Most Ugandans in Saudi Arabia, our sisters, daughters, brothers and sons are generally doing well. Majority of them have sensible and good bosses that treat them with respect. However there is a section of them that is not fine. The ones doing well have constructed houses here and remotely set up businesses home. So, our emphasis is on the ones who are suffering. Even though they are a minority, but to the President, they matter the most,”Walusimbi noted. 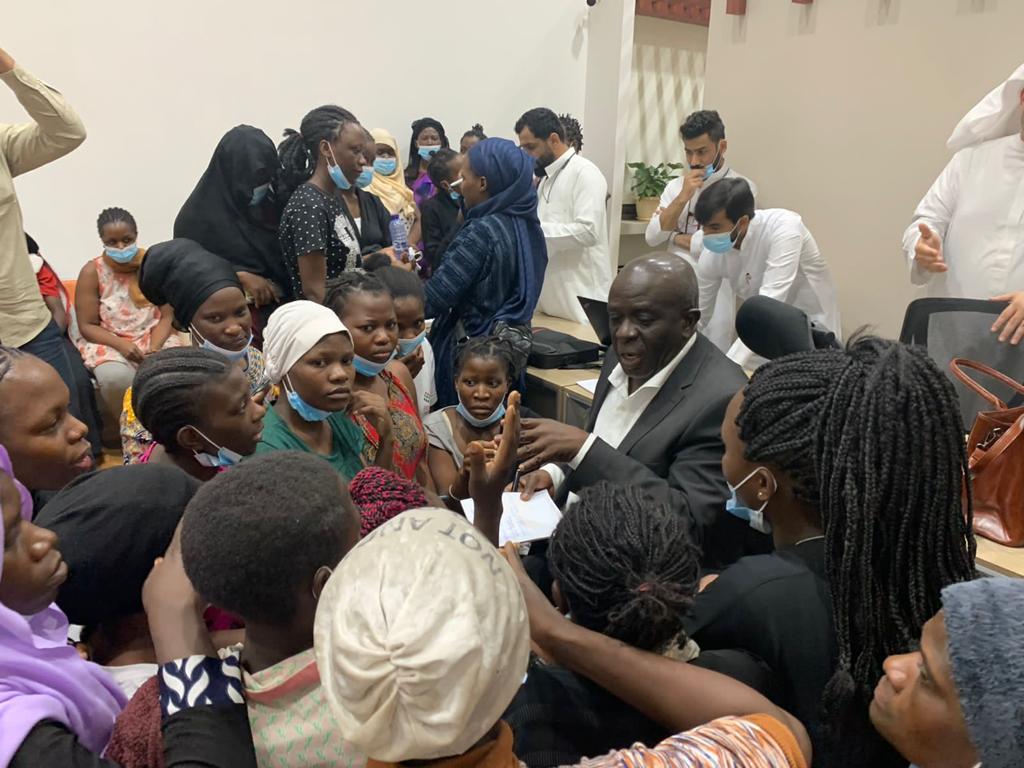 “The president is extremely concerned about those girls in the accommodations and reception centers who have no idea on when they are coming home. They need urgent help, and we as government are out to secure them.”

To the distressed migrant workers, Amb.Walusimbi assured them that the Office of the President is working with the Embassy in Saudi Arabia to have all the gaps filled.

“Do not lose hope, we are working with the Uganda Embassy in Saudi Arabia. We have so far had two separate meetings to discuss the issues affecting our citizens. We have come up with a team comprising the different stakeholders and we are out to work together in crafting ways to fill the gaps.” Walusimbi said.

According to Walusimbi, meetings are being held with the intention of initiating a document that clearly explains to the migrant workers their rights and ensure that the employers of the girls understand what is at stake if they breach the rights of Ugandan citizens

He said these will be included in the next bilateral labour agreements with clear standard operating procedures and key performance indicators for all parties involved.

Walusimbi sounded a warning to individuals and companies involved in illegal recruitment.

“A good number of the girls we talked to were not attached to any Saudi company and the types of visas they are on are not right which puts them at risk of abuse. The president is keeping a keen eye on those into the illegal recruitment business .Therefore, everyone involved is advised to endeavor to follow the right channels of recruitment, which is through the Ministry of Gender, Labour and Social development,” he noted.

He also stressed the need to conduct pre-departure courses for the potential migrants, sensitisation of recruitment agents and training of anti-trafficking Police and immigration officers.

The agony of being a father today

The United Nations World Aids Programme (UNAIDS) has presented the Kabaka of Buganda Ronald Muwenda Mutebi with an award for...

The Minister for Agriculture, Frank Tumwebaze has explained the government deliberate move to help both smallholder and large scale farmers...

A joint security team of the Police and UPDF have arrested at least 10 people suspected to be part of...

A man is nursing injuries after being shot in the buttocks by a UPDF soldier who was guarding a factory...

PICTORIAL: Live bands steal the show at Roast & Rhyme on the Nile