The Uganda Buddhist Centre has donated 12 tons of relief food items worth shs40 million to 230 families at Kigungu Ndese landing site in Entebbe Municipality that were recently affected by a fire outbreak.

The Uganda Buddhist Centre has donated 12 tons of relief food items worth shs40 million to 230 families at Kigungu Ndese landing site in Entebbe Municipality that were recently affected by a fire outbreak.

Over 200 houses, shops and other temporary structures as well as property worth millions of shillings were in December destroyed during a fire that broke out at Ndese Landing Site in Entebbe Municipality leaving fishermen and traders at a loss.

Over the weekend, the Uganda Buddhist Centre came to the help of the locals who were affected by the fire that left them homeless.

The only Buddhist Centre in the country donated 12tons of relief food items which included 30kg of posho, 10kg of beans, two kilograms of sugar and two litres of cooking oil for each of the 230 families affected by the fire.

“As a Monk, our religion emphasizes compassion and doing charity work. It is what we are doing to ensure these less privileged people have a decent life just like others,” said Most Ven. Kaboggoza Buddharakkhita, Uganda’s first and only Buddhist monk who also heads the Uganda Buddhist Centre.

“What we have done is just a tip of the iceberg of the support these people need.  They need more than material support but also psychosocial help.”

He urged other religions under the Interreligious council to join hands to come to the help of many other needy groups of people in the different parts of the country.

During the function, Kaboggoza Buddharakkhita didn’t leave without speaking to the affected locals about Buddhism.

He explained that learning and following Buddhism teachings does not mean one to leave their religion.

Started in 2005, the Uganda Buddhist Centre is the first and only Buddhist temple in Uganda located in Bulega-Garuga, Entebbe of the Kampala-Entebbe road. 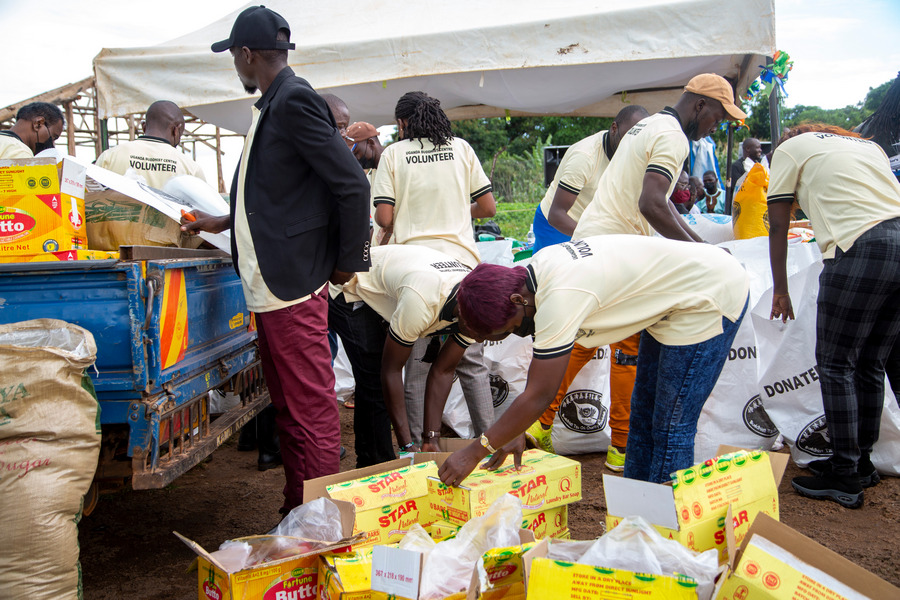