The two commanding officers for Operation Shujaa from the Ugandan army and its counterpart from DRC have broken ground for the construction of the 125km Kasindi-Beni-Butembo road.

The two commanding officers for Operation Shujaa from the Ugandan army and its counterpart from DRC have broken ground for the construction of the 125km Kasindi-Beni-Butembo road.

The ceremony which took place at Mpondwe-Lubiriha border post drew a mammoth crowd from the two sister countries.

Speaking during the function, the UPDF commander for Operation Shuja, Maj Gen Kayanja Muhanga remarked that the road project is important for it is regarded as a security road as well as a national strategic end state of creating a peaceful environment for the people to carry out business unfettered.

“We are also jointly constructing other roads like Nobili – Mukakati – River Semulik and Burasi – Boga roads and after the Bunagana-Rutchuru – Goma road will be protected and tarmacked,” Gen Muhanga noted.

He underscored the cooperation of the two militaries which he said is of great benefit to the citizens of both countries.

“Our strong brotherly relationship with FARDC is unmatched. We are doing everything together. Gen Bombelle and I are like parents, that if one child misbehaves, we get a stick and discipline him,” he said referring to the Junior commanders who are brought to order in case there are misunderstandings or mistakes.

He noted that the first and second phases of the operation against ADF rebels to dislodge and destroy their camps of Tondoli, Abia, Kambi Ya Yua, Chua, and others and dominate the cases have been completed successfully.

“The enemy is on the run scattered in smaller groups but ultimately we shall find them,” he said.

Maj Gen Bombelle Camille Ehola from FADRC said that the joint forces are working together, sharing the available resources, and fighting the enemy of peace together.

“Our cordial relationship in fighting the enemy is being shown in the results of Operation Shujaa. This is also reflected among our soldiers who are eating, sleeping, and fighting together. I am confident that with this relationship, enemies of peace will be wiped out in this region” Gen Bombelle said.

“I send profound appreciation from the people of Congo who have started realizing peace in their places as a result of the joint operation. Recently I was in Kommanda and Eringeti, people are longing to see Gen Kayanja Muhanga because of what he has done in fighting ADF.” 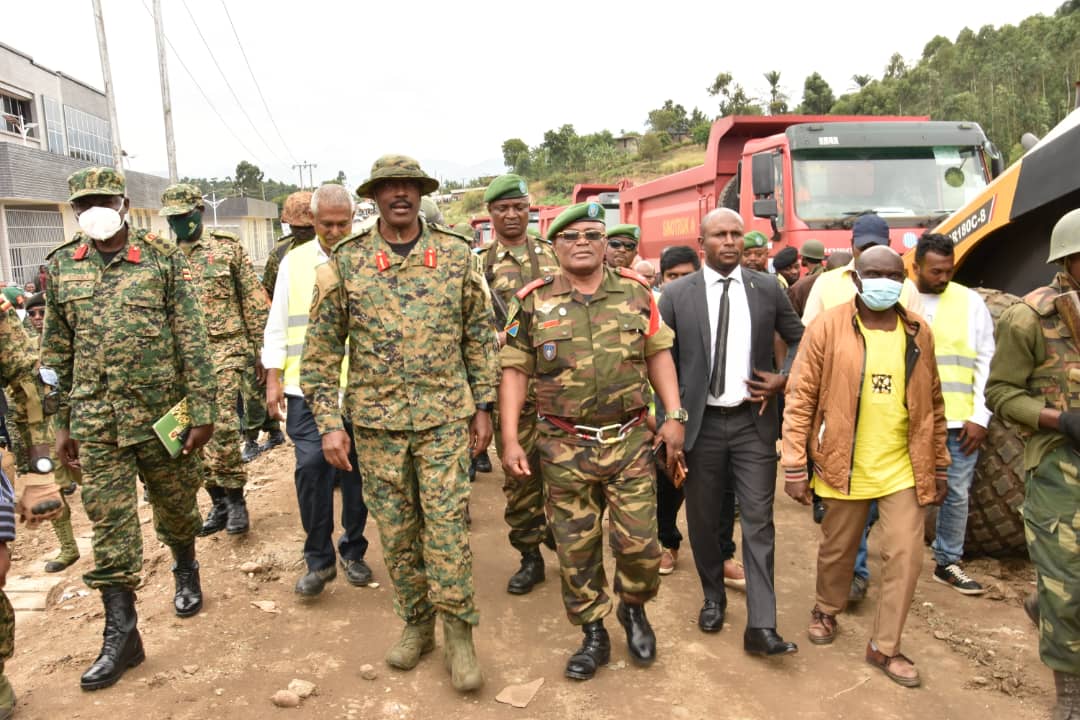 He said by breaking ground for the construction of the 125km road, they are implementing what the two presidents of Uganda and DRC agreed upon; to construct roads adding that the joint forces were ready to execute the task to its successful end.

“I would like to remind you that the two presidents gave us the task of guarding this project. Our forces are ready to implement the task and we have mobilized the population along the roads that in case they see the enemy around they should immediately inform us for action,” said Gen Bombelle.

Presenting documents endorsed by the two presidents to customs officials and the contractor DOTT Services Limited, Gen Bombelle cautioned immigration and customs officials not to hinder the free movement of machinery, human resource, and goods meant for the project.

Muhindi Eliphaze Bukombi, the Kasese LCV Chairman, thanked the two presidents of DRC and Uganda for being visionary on trans-border infrastructural development.

This he said will transform and uplift the well-being of the people of the two countries.

“The construction of this infrastructure is going to uplift the economic wellbeing of our people not only in trade but also cement the cordial relationship between the two countries,” he said.

He added that the joint forces working together in eliminating ADF have brought enormous confidence to the population that peace and security will be achieved.

“Aware that peace and security is the cornerstone for meaningful development, we thank the two presidents for being visionary; for they realized that although we are separated by boundaries we need to coexist. People of Kasese are the primary beneficiaries of this project through employment, rental services, and buying or sale of products. It is, therefore, our cardinal duty to see security prevails in our region,” Bukombi emphasized.