The  UPDF has participated in the national launch of the African Union amnesty month in implementing a project on voluntary surrender of illicit small arms and light weapons.

The  UPDF has participated in the national launch of the African Union amnesty month in implementing a project on voluntary surrender of illicit small arms and light weapons.

Africa Amnesty Month is a complementary initiative of the African Union’s (AU’s) “Silencing the Gun Flagship” initiative to end conflict in Africa by 2020.

However, the master roadmap of practical steps to silence the guns in Africa was extended by the African Union for a period of 10 years; 2021-2030.

The event was organized by the Ministry of Internal Affairs in partnership with the United Nations Office on Disarmament Affairs (UNODA), African Union Commission (AUC) and the Regional Center on Small Arms (RECSA).

While launching the Amnesty month project in Uganda,  Maj Gen. (Rtd) Kahinda Otafire,  appreciated UNODA, AUC RECSA for having chosen Uganda as one of the three countries to be supported by the African amnesty project, 2021, further expressing the government of Uganda’s commitment towards the realization of a peaceful continent.

The representative of the African Union Commission Peter Otim said that the widespread of small arms and light weapons among the civilians in the continent has direct and diverse effects towards human security, state security, democratic governance and development in countries.

“The urgency of removing small arms and light weapons from civilians on the continent is very critical if we are to realize the aspirations of “silencing the guns” agenda for a prosperous and peaceful Africa.”

The representative from the United Nations Office on Disarmament Affairs Mr. Peter Mwamachi, who represented the United Nations order, assured UNODA’s commitment to African silencing the guns agenda, UNODA’s support to Uganda towards the implementation of this project and called upon all the stakeholders to ensure that the initiative is implemented to its best.

The Executive Secretary of the Regional Center on Small Arms, Lt Gen Badreldin Elamin Abdelgadir stated that armed conflict has for a number of years been one of the continent’s main undoing in terms of development.
“One of the biggest challenges Africa faces are the weapons in illegal hands because they cause insecurity that hinders development. They facilitate violence and crimes, such as drug trafficking, arms trafficking, illegal financial flows, armed conflicts, transnational criminality, and terrorism among others”, he observed.

Lt Gen Badreldin said that today’s event was a key indicator that the Government of Uganda was committed to curb the proliferation of Small Arms and Light Weapons (SALW). 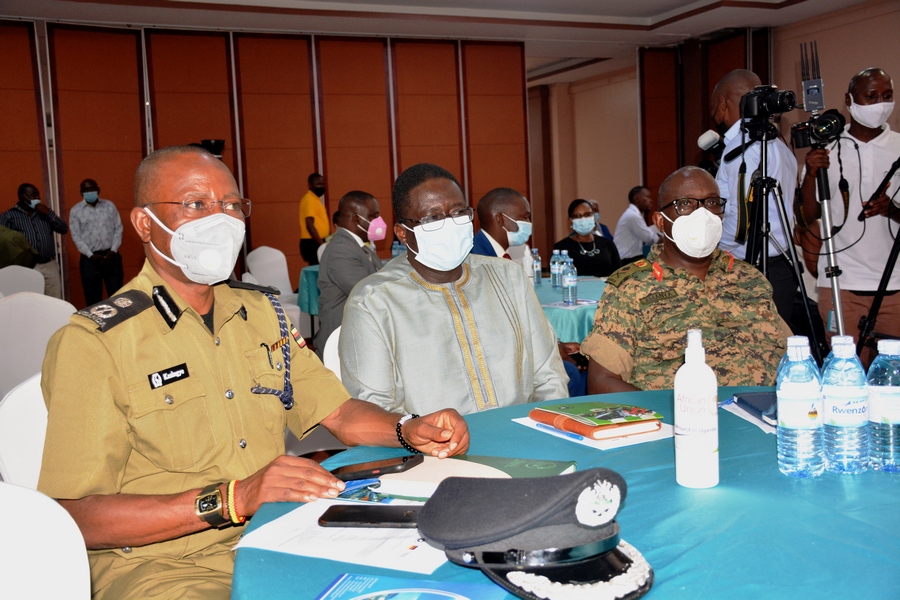 The 2021 African Amnesty project in Uganda will focus on four regions of  Northern Uganda, Karamoja, Rwenzori and Kampala Metropolitan region and t will be coordinated by the Uganda National Focal Point on Small Arms and Light Weapons (NFP/SALW), and facilitated by the ministry of Internal Affairs, UPDF, Uganda Police ,  civil society organisations  and the Regional Center on Small Arms (RECSA) with funding from the Federal Government of Germany.

The activities involved in this project will include; sensitization and awareness campaigns on illegal gun ownership and illicit flow of weapons, collection and destruction of illicit arms and light weapons/ammunitions, community based workshops in the four  selected regions, and training of law enforcement officials.

Among the expected outcomes of this project include; setting a strong community mobilization base and awareness-raising though communication drive to take the issue of arms surrender forward, networks and forums at the region, districts and local levels promoted to trigger arms surrender processes among others.

During the function, 18year old Birungi Chloe Anne, a senior four leaver of Kitante Hill School and a daughter of Ministry of Defence member of staff working with UPDF engineering brigade as an accountant won the first prize of the three prizes awarded at the event for contributing a slogan for silencing the gun campaign in Uganda; “Embrace peace, Give up the Guns.”

The aim of the Amnesty Initiative is to involve citizens in helping governments to reduce the illicit flow of weapons on the continent.

The event that took place Silver Spring Bugolobi, Kampala, was attended by; the Director of the Directorate of Citizenship and Immigration Control, Major General Apollo Kasiita-Gowa, Members  from the ministry of Internal Affairs, UNODA, AUC, RECSA, UPDF, Uganda Police, Ministry of Foreign Affairs, Civil Society  among others.

Airtel-FUFA Awards 2021: All the nominees

President Museveni has  commissioned a primary school in Tanzania to fulfil a presidential pledge he made to the late Tanzanian...

The Minister for East African Affairs Rebecca Alitwala Kadaga has dismissed reports attributing her to a presidential bid in 2026....

Security has said they have recovered more bomb making materials in Nabweru, a Kampala suburb as part of their ongoing...

Ugandans have been advised to invest in real estate to grow their income because real estate is one of the...

Airtel-FUFA Awards 2021: All the nominees