The High Court in Mukono has issued an arrest warrant against Mathew Kirabo who is accused of the murder of his girlfriend, Desire Kirabo.

The High Court in Mukono has issued an arrest warrant against  Mathew Kirabo, who is accused of the  murder of his girlfriend, Desire Mirembe.

In the warrant dated November 3, 2021, Judge Henry Kaweesa has tasked the police to arrest Kirabo and present him in court “as soon as possible” having missed trial on Wednesday. 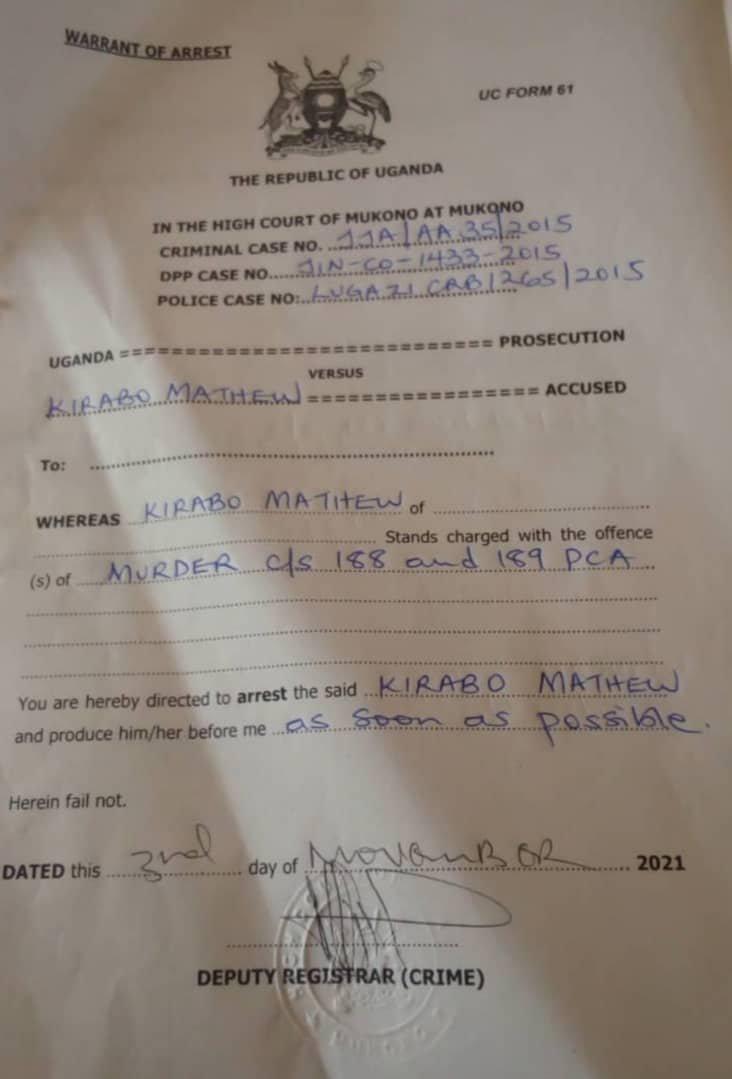 This website understands that Kirabo, who is accused of murdering his then girlfriend Desire Mirembe was introduced by a lady with American citizenship over the weekend.

Relatives of the deceased Mirembe now fear that he might be planning to flee the country and get citizenship in the United States of America.

Frank Gashumba, who is one of the relatives of the deceased, said that Desire Mirembe might never get justice and urged anyone who knows the whereabouts of Kirabo to report to the nearest police.

“He (Kirabo) did not appear in court after realising that the evidence against him is overwhelming, please locate him!” Gashumba said.

Mirembe, a then Makerere University student disappeared and her body was recovered from a sugarcane plantation in Lugazi, Buikwe district, on July 7, 2015.

Her suspected killer, Mathew Kirabo confessed to the gruesome act and was charged in the Jinja Magistrates Court with murder before being remanded. He was later granted bail on November 24, 2016 and has been out of prison since.

The case was later moved to Mukono on the instructions of the then Principal Judge Yorokamu Bamwine after the state complained that the crime had been committed within the Mukono jurisdiction.

In 2017, the Mukono High Court said that it did not have money to start hearing the case.

In May 2021, court in Mukono heard the prime suspect, Mathew Kirabo’s application in which he was seeking return of his passport so that he could travel to the United States of America for further studies.

Kirabo’s lawyer, Isaac Kato told court then that his client needed to travel urgently and could not even make it to court. The suspect was, however, found in his car, a black Harrier SUV just outside court.

The family then mounted pressure on court to dispense justice for their fallen daughter, saying that if a date could be fixed to hear the suspect’s application, then they should also fix a date to hear the main case.