Houses have been submerged by the water.

It’s a hot sunny day on the shoreline of Lake Albert in the Bunyoro sub-region. The sweltering heat, combined with rising water levels has created a bother for the local communities.

No one seems to know what is happening anymore, with many attributing the rapid environmental changes to annoying spirits. Houses, schools, health centers among others are standing in water, inaccessible to their owners. Mother Nature struck back at mans’ activities without warning.

The water levels of lake Albert rose by a record 14.6 meters in September and this has seen thousands displaced hence impacting on the social and economic livelihood of the communities.

Tonya Primary School is now turned into an island as it was surrounded by water, the school has been abandoned by the administration as accessing it is now difficult. In such rudimentary classrooms is where life has to go if one wants to continue with his or her education.

Moses Kyaligonza, the headmaster at Tonya tells us that the school had just started term 1 this year when the water levels started increasing. 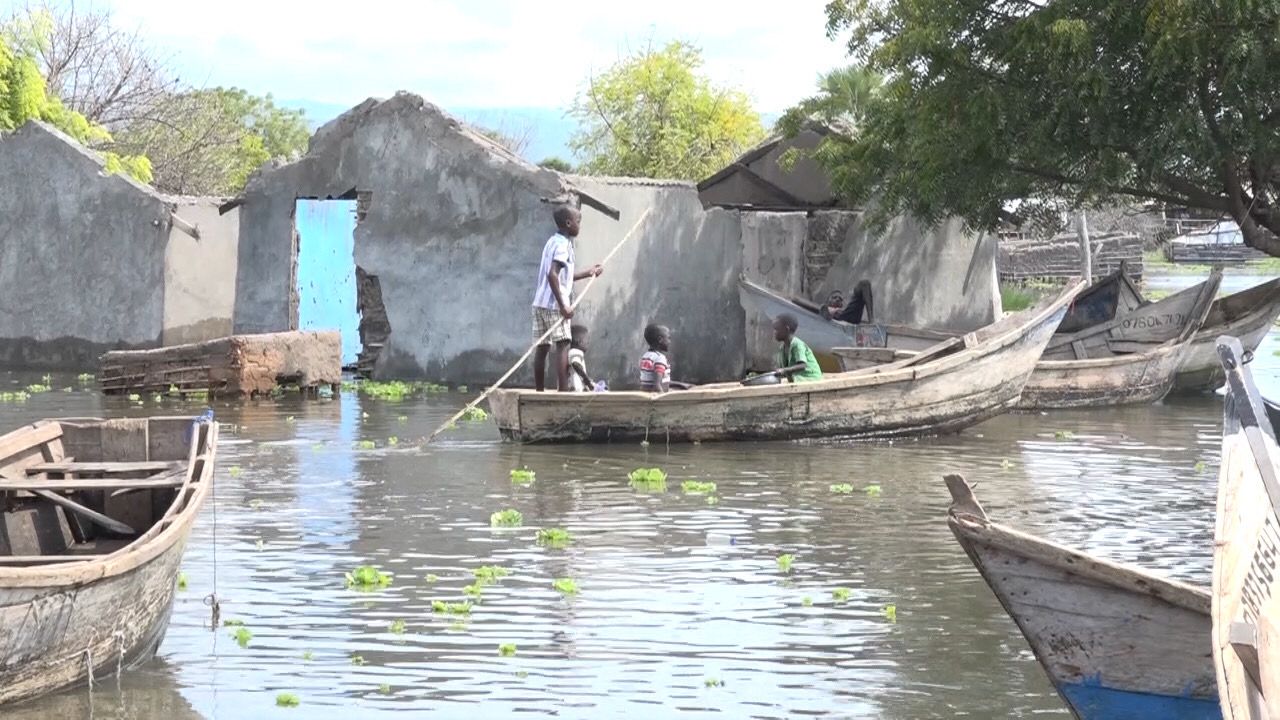 “Children started coming by boat from various places until the water levels increased to a level that was too much in that boats could not manage to cross, so we were forced to shift to other places,” Kyaligonza said.

Why the lake levels rose, is something interpreted differently by the locals. Many cannot tell why it is like this, and why now.

In a phone interview, Dr. Calist Tunomugaya, the Commissioner for Water Resources Planning in the Ministry of Water and Environment said the rise of lake Albert’s water levels is due to an increase in water caused by rain in Uganda and the neighboring regions.

“All this was caused by an increased amount of rainfall in the region within Uganda and the region, that’s Kenya, Rwanda, and Burundi. We are getting a lot of water through Kagera and a number of rivers flowing into Lake Victoria,” the commissioner said.

With the rain setting in, the ministry of water and environment has expressed concerns about the expected dangers since the water levels have only reduced by 1 meter from the highest registered in December last year.

As a government, the plan is to ensure people don’t occupy the lake buffer zones.

Authorities say that the continuous rains and inflows from rivers around the Rwenzori region are responsible for the rising water levels in Lake Albert and the flooding of surrounding areas.

The floods have devastated several areas in the Ntoroko district where more than 70,000 people are living in camps in the Kanara sub-county, 1,300 homes are abandoned and uncountable properties destroyed.

This article is the product of the author’s participation in the Young Journalists’ Training, delivered by Pioneers Post, in the context of the British Council’s Stronger Together for Climate program around the Global Youth Letter. Take a look at the letter and participate in the 8,000 Rising Campaign to unite your voice with young people across the world!

Disclaimer: The views expressed in this article are those of the author and do not necessarily reflect the official position of the British Council.