by Lindah Nduwumwami
in Sports

Joshua Cheptegei, Peruth Chemutai and Jacob Kiplimo were each rewarded with an assortment of electronics including the latest OLED LG TV from Diamond stars Ltd, the authorized distributors of LG electronics in Uganda.

The reward ceremony marked the unveiling of the OLED LG with the highest resolution ever of 8k instead of the normal 4k. 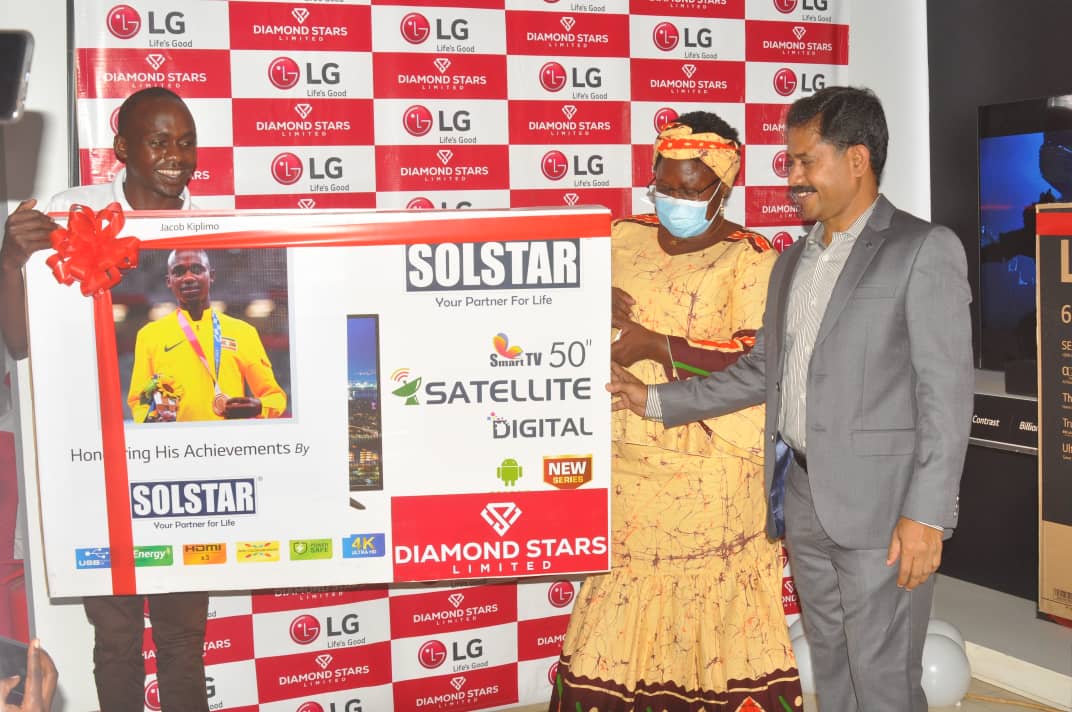 Jacob Kiplimo, the 2020 half marathon world, expressed his gratitude and revealed he is focusing on half marathons that will taking place in the coming months.

Speaking at the event, that took place on Friday 8th October, 2021 at the company offices in Bugolobi Industrial area, Minister of Education and Sports in charge of Primary Education Joyce Moriku Kaducu, appreciated the management of Diamond Star for rewarding the athletes.

“I want to appreciate the management Director of Diamond Stars for appreciating and honoring our great men and women who have elevated Uganda’s status worldwide. To the people of Uganda, what we have seen today, should not stop here. I call upon Ugandans to support Diamond Stars by buying this latest TV because they are on promotion and on offer so that we support our medalists,” said Kaducu.

She revealed her mission as the minister of Education and Sports saying, “It is my honor to scale up the games and athletics among school children. This has demonstrated that we have unique talent in our children and so we should promote sports in our schools to take this skill to another level.”

Several other companies have come out to promote and reward the athletes. In August, the Inspector General of Police, IGP John Martins Okoth Ochola promoted three female police officers who participated in the Olympic Games in Tokyo.

Among those promoted was the Olympic 3000m female steeplechase gold medalist Peruth Chemutai and Joshua Cheptegei who won gold in the 5000m race and silver in the 10000m race. Mercyline Chelangat and Immaculate Chemutai, were promoted from the rank of SPC to corporal.

Mpuuga to EU delegation: “Why NUP will not join IPOD”

The Leader of Opposition in Parliament, Mathias Mpuuga has retaliated the National Unity Platform's decision to boycott the Inter Party...

No one is persecuting MPs Ssewanyana, Ssegirinya, says Attorney General

Mpuuga to EU delegation: “Why NUP will not join IPOD”

No one is persecuting MPs Ssewanyana, Ssegirinya, says Attorney General

Before you start cheating on your spouse, here is what you should consider

Times have really changed. People are having sex...