The ICT Minister Dr Chris Baryomunsi, on Wednesday presided over the commissioning of new Uganda Communications Commission (UCC) board of directors.

The ICT Minister Dr Chris Baryomunsi, on Wednesday presided over the commissioning of new Uganda Communications Commission (UCC) board of directors.

New faces on the board include Ms Lucy Ntabazi, Mr Edson Ngirabakunzi, Eng. Paul Odoi and Eng. Geoffrey Agoi. Acting Executive Director Irene Kaggwa Sewankambo is a member by virtue of her position. 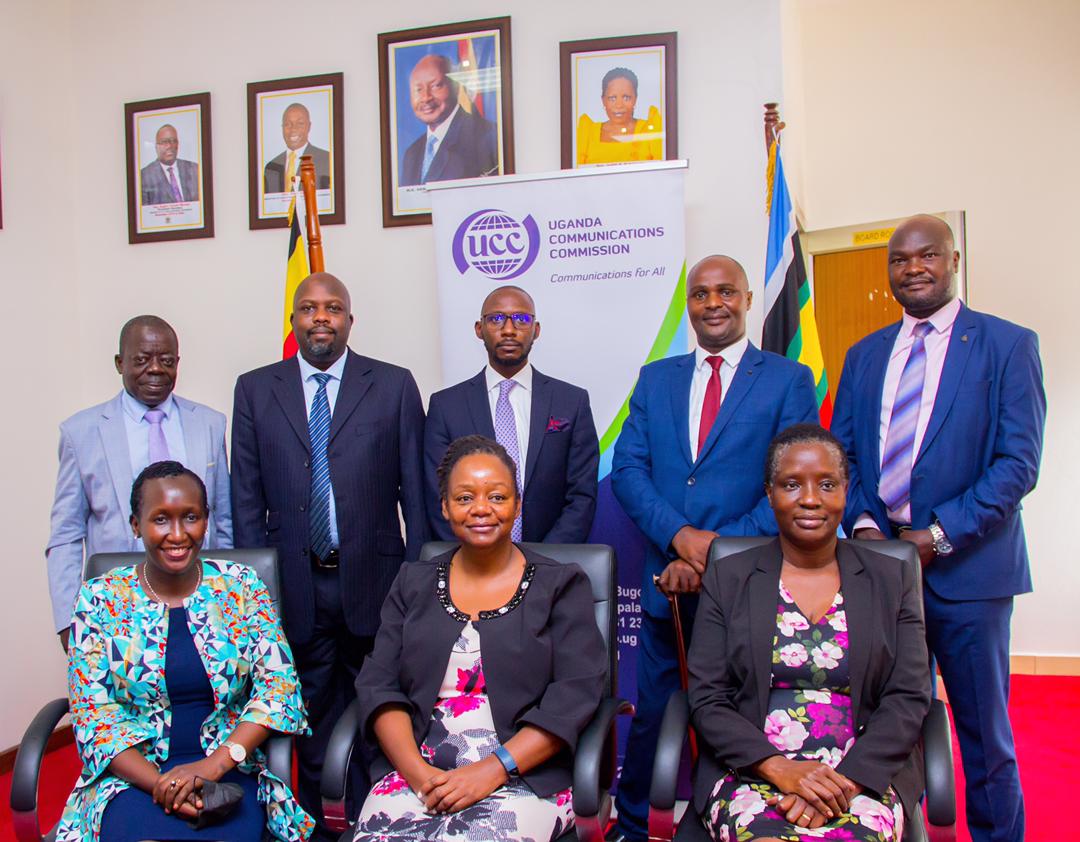 Speaking during the board members’ swearing-in ceremony and inauguration at the ministry headquarters, minister Baryomunsi described new members of UCC board as “high calibre” and pledged to support them in their oversight role.

“We as the ministry shall give you all the support you need so that you can do your work of providing oversight over UCC,” the minister said.

Baryomunsi, who was flanked by Minister of State Godfrey Kabbyanga, and the Permanent Secretary, Dr Aminah Zawedde, thanked the outgoing members of the board as well as the UCC management for the work they have put in to make the agency one of the most recognisable brands across the country.

Recalling his first visit to UCC in his new position last week, the minister said his team was “impressed by what we saw”, citing the arrangements and technologies put in place to facilitate regulation of the communications sector.

“When we came back, we resolved to give you maximum support so that you can be able to do your work,” he said, outlining some of the 26 functions the Commission is assigned in Section 5 of the Uganda Communications Act 2013.

The minister, however, noted that UCC’s work is well cut out, with communication and media space in dire need of effective regulation.

“The technology enables communication, but we also have individuals who misuse it,”
Baryomunsi said, citing abuses and fake news on social media, among others.

He called on UCC to liaise with sister agencies such as Media Council to ensure a coordinated approach to communication regulation.

Dr Okello, also Dean of the School of Engineering at Makerere University, said UCC has a great mission to drive the development of a modern communications sector, adding that she is honoured to be part of that agenda.

“I want to commit on behalf of the board that we will continue on the EPIC journey,” she said, in reference to the Commission’s corporate values – “Excellence, Professionalism, Integrity and Commitment.” Dr Okello committed.

“We are doing this assignment on delegation from the ministry,” the chairperson noted, calling on the ministry’s leadership to support the board.

On his part, Hon Kabbyanga urged the board to regularly report to the Minister of ICT and National Guidance who is delegated them so that he, in turn, can report to His Excellency the President who delegated him.

Hon Kabbyanga further called on the new board to support the Ag. Executive Director.

“You must support ED to do her work as a board. We shall also support you to support her,” the minister said, adding that the new ministry leadership had taken note of UCC “doing very well.”

In the end, through what he admitted was a “rigorous process”, Baryomunsi and the cabinet have assembled an impressive line-up of persons he described in glowing terms “high calibre,” “high profile”, “eminent”.

On their shoulders lies the task of steering UCC through its epic journey towards an inclusive digital economy.

Cabinet has okayed the planned mandatory Covid-19 test for all international travellers entering Uganda. “It was agreed that all travellers...

The deaf need our attention, love