Opposition Forum for Democratic Change (FDC) has deleted a tweet in which they insinuated the death of Deputy Inspector General of Police Maj Gen Paul Lokech to have been caused by the sitting government.

Following the death of Gen Lokech yesterday, FDC released a statement on Twitter in which they claimed that the former Amisom commander “joins thousands that have been killed and murdered by this regime…”

The tweet brought criticism, with a section calling them out for wanton recklessness.

In clarifying, FDC said they did not insinuate that Gen Lokech was murdered by the regime, rather that he joined several who had died under the regime’s hand. 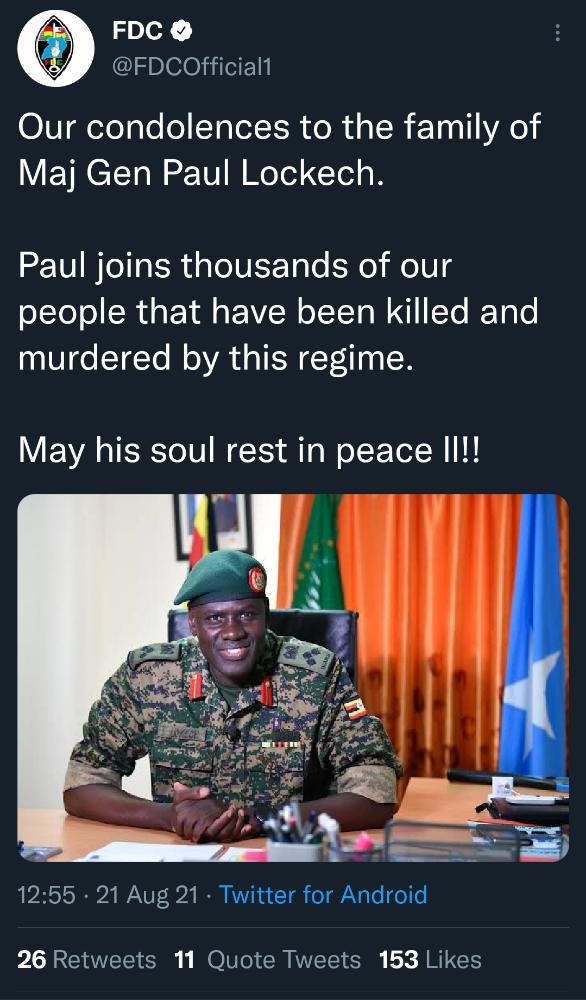 “We aren’t alleging or confirming that Maj Paul was killed or murdered. It’s by his death that he will join thousands of our people that have been murdered and killed by this regime. Let’s get facts right!!!”

The clarification did not make things any better, instead it further infuriated tweeps who called for the party to issue an apology and delete the tweet.

“Stop politicizing everything guys, mupapanyo nebigambo, you are embarrassing the party leadership and our Dr Besigye, stop it,” Noah Ssenabulya tweeted.

“So he doesn’t join your people who died of causes other than being ‘killed or murdered’ as you allege? We have not known you for cowardice, come out openly and say what you want to say about him since you seem not to respect the dead!” Thomas Obita.

By Sunday morning, the tweet had been pulled down from the timeline.

According to a statement from UPDF, Lokech died at his home on Saturday morning.

The IGP Martin Okoth Ochola has directed the Director of Medical Services, Dr Moses Byaruhanga to carry out a post-mortem to establish the cause of death.

Lokech, better known as the Lion of Mogadishu was appointed Deputy IGP on December 16th last year following a two-year stint in South Sudan on a special assignment from the Commander in Chief.

The High Court in Mubende has nullified the election of Joyce Bagala Ntwatwa as the Woman Member of Parliament for...