Where is the book found: All Ugandan Bookshops

“One Last Smoke” sounds like a title to a Snoop Dogg song, and it could be. As Edgard the Bard’s poetry collection has the narcotic power of leaving a reader hooked with every line.

Although written in free verse, it has a fixed patterning on musings, metaphors and rhythmic designs which tacitly agree with T. S. Eliot’s view in “Reflections on Vers Libre,” that no verse that is any good is entirely free.

The Prologue of this book sets the tone:

“Having to constantly face the elements,

One has to wonder

Whether man is useful with his time.

A stitch in time saves none.

Grudgingly, he prepares for his seven to nine.

Unmoved by the horizon’s calling for life anew,

Untainted by the freshness of dawn’s dew.”

With our noses daily to the grindstone, we rarely have time to smell the proverbial roses. Instead, we are trapped in a mouse wheel revolving around work in a manner which turns our realties upside down. 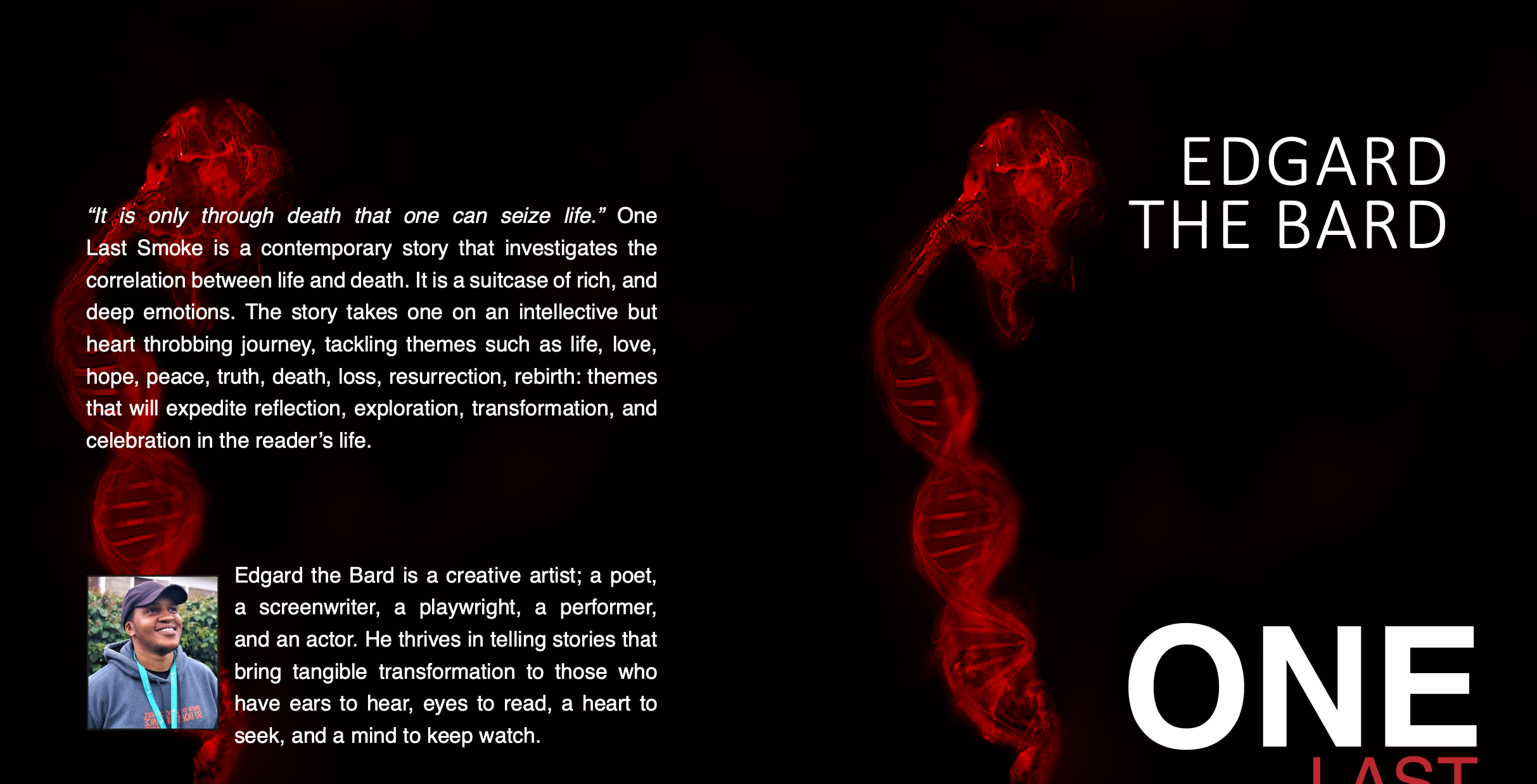 Possibly that is why, in the last line, ‘dawn’s dew’, which is figuratively and literally a cleanser as to its freshness, is revealed as something which taints an otherwise tainted existence.

In the poem, HAPPY LIFE, we witness the persona’s raging against the dying of a light.

Who can stop the hour hand from striking midnight?

If silence is what awaits me

It’s what I desperately seek.

Life must be happily lived.

Where death lurks, the persona seeks life. This contradiction is a sort of Chiasmus as the concepts of sadness and happiness are reversed to place happiness before death instead of sadness. By this token, the persona believes in the futurity of eternity.

This underlines the persona’s faith that what may go up in smoke (puff puff) symbolizes our constant striving to reach the heavens.

In many religious traditions, smoke has been used as a means for prayer.

It is also viewed as the representation of the immortal souls of the dead or dying rising into heaven and their energy being elevated to a higher plain.

In possibly this anthologies shortest poem, THE AUTHOR, the persona expands on this notion of eternal life:

At the poem’s center, the active verb “give” and phrasal verb “take away” presuppose the larger picture of God’s plan.

The Author is God, as the Author of life.

In the Bible, there are many names given to God (the most frequent being Yahweh).

On a purely poetic level, these many names of God serve as images and thus place this poem in the poetic genre of “Imagism”.

The father of Imagism Ezra Pound defined it as “that which presents an intellectual and emotional complex in an instant of time”.

The image of The Author, in an instant of time, thus brings together two worlds: this one (the one He gives and takes away) and the next (it is not the end).

This book, as I said before, is addictive in that you will not want to put it down.

Edgard’s poetry is written in soaringly melodious tones which often border on hymnal verse form. As an added delight, there’s no trace of any preachiness in this poetic rendering of the bard’s truth.

Most importantly, it is a work of art whose adaptability suits “those who have lost, who are losing, and who are about to lose.”

And thereby, in the spirit of loss leading to gain, this book is a winner for everyone.

Book Review: Christmas comes early, in the shape of poetry