Love or loathe Museveni, it is a tribute to his political skills that Uganda has so far avoided the existential tribal violence now threatening to destroy Ethiopia as a nation state

by Sam Akaki
in Opinions

Love or loathe Museveni, it is a tribute to his political skills that Uganda has so far avoided the existential tribal violence now threatening to destroy Ethiopia as a nation state.

“Coming to the armed forces, especially the army,” he said, “My advice to all of you, is that leave the army out of that nonsense. The NRA, the UPDF are armies of sacrifice, all the time for no pay or low pay. They (we) put their lives on the line… leave UPDF out of the circus of sectarianism.”

It is not only the UPDF, which is the subject of tribalism talk in Uganda.

According to many politicians, newspaper columnists, social media activists and even tribal music, all state institutions and government agencies have been tribalised and filled with people from western Uganda.

Nor is tribal politics a new phenomenon in Uganda. The 2016 presidential election campaign had appeared so blatantly tribal that I was compelled to write a piece, ‘Anti-Bahima, Bakiga crusaders should reflect on the Acholi-Lango squabbles in 1985’, published in the New Vision on 22nd July 2015. 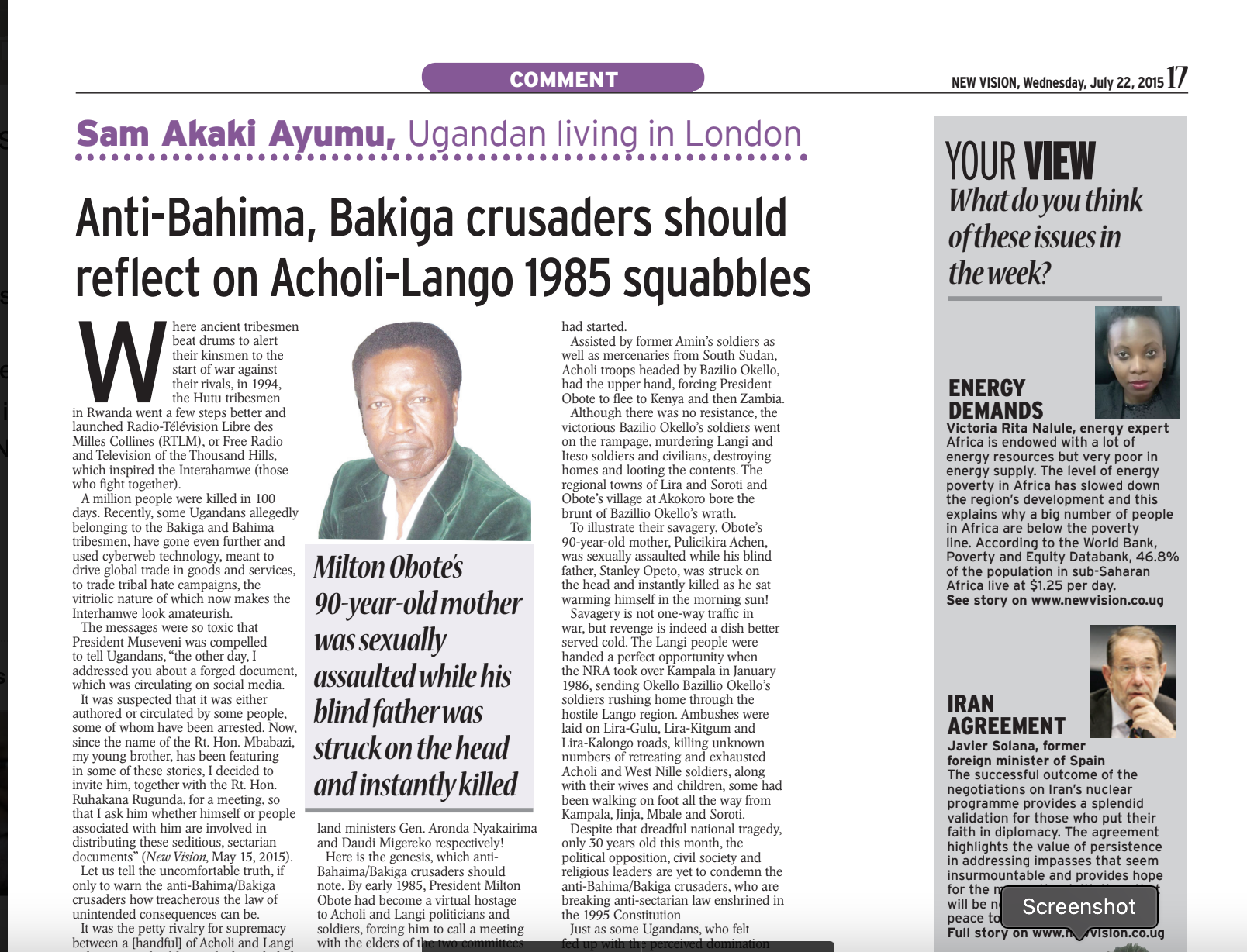 “Let the uncomfortable truth be told, if only to warn the anti-Bahima/Bakiga crusaders how treacherous the law of unintended consequences can be. It was the petty rivalry for tribal supremacy between a handful of Acholi and Langi politicians and soldiers, which exploded and ultimately led to the insurgency which raged in the north and east for twenty years, killed hundreds of thousands of people and drove two million into Internally Displaced Persons (IDP) camps where the lived in the most dehumanising conditions.”

I was responding to an earlier headline in which Museveni had reportedly said:

“The other day, I addressed you about a forged document, which was circulating on social media. Now, since the name of Rt Hon Amama Mbabazi, my young brother, had been featuring in some of these stories, I decided to invite him, together with Rt Hon Ruhakana Rugunda for a meeting, so I ask him whether himself or people associated with him are involved in distribution these seditious, sectarian documents” (New Vision, 15 May 2015).

Today, Ethiopians might be wishing they had someone like Museveni as their Prime Minister. Sadly, there is no time for that because they are far too busy mourning their dead, waiting for donated food aid and organising revenge tribal massacres.

It all started last November 4th, when the Nobel Peace laureate Prime Minister Abiy Ahmed Ali announced his “operations to restore law and order in Tigray”.

But, that operation is rapidly becoming a full-scale civil war.

For eight months, Tigray, a region of more than six million people has been blockaded, bombarded and denied access to humanitarian assistance. Worse still, starvation and sexual violence have been used as weapons of war.

As a result, thousands of innocent people including children have been killed, maimed or displaced internally and externally. At the same time, social and economic infrastructure including schools, hospitals and bridges have been destroyed.

Then in a lightning counter attack, rumoured to have received foreign assistance, Tigray Defence Force managed not only to defeat a combined force of Ethiopian national army, Eritrean national army and the Amhara tribal militia.

They also captured and paraded thousands of these troops through the streets of Makele, the Tigray regional state capital.

To bring that message home to Uganda, just imagine the horror scenario, if Joseph Kony and his Lord’s Resistance Army (LRA) had captured thousands of UPDF soldiers before marching them through Gulu city!

But the Tigray Defence Force is not the LRA. They are professional soldiers who deserted the Ethiopian national army. They are also commanded by battle-hardened officers who had spent almost a quarter a century fighting Col. Mengistu from 1975 to 1991.

In a last dice attempt to save Ethiopia, Prime Minister Abiy Ali has announced a general mobilisation of the other nine tribal militias in an effort to root out what he has described as the “cancer” killing Ethiopia.

With or without Tigray, the only terminal cancer killing Ethiopia is tribalism.

With a population of 115 million, the country is a huge patchwork of some 80 different tribes, who share nothing else in common except their burning hatred for Tigrayans, alleged to have dominated national politics, army and economy for 21 years when they ruled Ethiopia.

This makes Ethiopia a timely if tragic warning to those Ugandans, who are consistently and persistently blaming westerners for dominating national politics, army and economy since the liberation war.

The removal of Gadaffi turned Libya into a failed state, opening flood gates for migrants to Europe and creating a safe haven for Jihadists now spreading death and destruction across north, west, south and east Africa. Ethiopia could be their next battle ground.

The author Sam Akaki is a witness to, and survivor of all political violence since 1966