Barely two months ago, Julius Ssekitoleko fell from a symbol of pride, to a prisoner of an unknown crime, as his homeless girlfriend continued to hop from one relative and friend to another for shelter

by Daniel Sebakijje
in Featured, Sports

Ssekitoleko, A symbol of pride

Just over a month ago, Ssekitoleko was a symbol of national pride. Smartly clad in the Uganda Olympic attire, ‘Sseeki’, like his peers in Kisugu where he hails refer to him, was smiling from ear to ear, as he was among the first five athletes flagged off to dreamland, Japan, where the biggest multi- national sporting event in the world was bound start on the 23rd of July.

Ssekitoleko wasn’t new to the global stage but this one was none like the past. A medal at the Olympics for the son of a single mother was always going to feel sweet. But it all ended in his dreams, after the situation forced him into making the most regrettable mistake of his life.

He skipped a mandatory covid-19 test in Japan and disappeared for days in the Asian country.

Before Ssekitoleko had handed himself to Japanese authorities, with his name appearing in google searches world over, I traced his family back home.

At her simple home in Wabigalo, a Kampala suburb, Julius’ mother, Juliet Nalwadda, a former casual worker in the Kampala Capital City Authority sits me down on a traditional Ugandan mat, placed on the cracked veranda.

Her face a canvas of many of emotions. (Confused, worried, frustrated, angry, and helpless.) She rushes into the house and returns with a bundle of medals. (About 20). She swings them before explaining to me in Luganda how these are her son’s awards in an illustrious career. She is clearly proud of her second born. 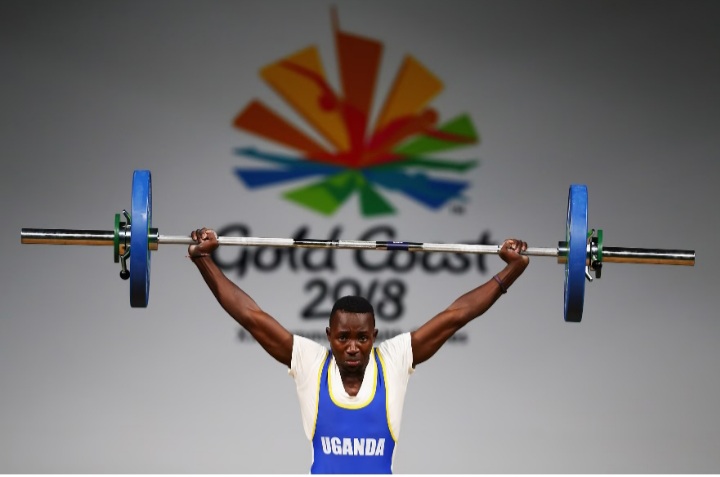 “This one he won in Australia, in 2018, (Gold Coast Commonwealth games), this one in Cairo, this one in Zimbabwe, this in 2011 playing rugby in the United Kingdom,…”, and she goes on and on trying to show me how much his son has sacrificed representing his country.

After the 2018 commonwealth games in Australia, Juliet says her son returned injured but she footed all the bills for his treatment. He bought a motorcycle for business with some of the money he got, however, that bike was soon destroyed in an accident.

Julius has always loved sports. His mother confesses that she tried to discourage him from pursuing it but did not heed her advice. He started as a tag rugby player representing Uganda at Twickenham in England in 2011 before being introduced to weightlifting at the Kisugu Unified Gym in the neighbourhood about eight years ago, and as they say, the rest is history.

Ssekitoleko has travelled many times abroad and watched some of his colleagues disappear into thin air on these trips. He always returned. What forced him to try his luck and disappear into Japan this time?

“They didn’t counsel my son”

In her son’s defence, Nalwadda blames those who took him to Tokyo for raising his expectations, by taking him early, yet they were not yet sure of his qualification.

“He kept telling me, mum, in Australia I was young, but this time I will leave it all on the weight, he was so determined to win a medal at the Olympics. I think when he was told he was not going to participate, as a young boy he felt so bad and ran away, but they did not even counsel him,” she continued.

Reports indicate that the team did not travel with a psychologist to help the team cope with the stress of performing at this high level.

Apart from the pride of winning at the Olympics, Ssekitoleko had a more personal motivation to succeed in Tokyo.

His pregnant girlfriend Desire, is five months pregnant with his first child.

In a small ghetto in Kansanga Sebulima zone lies the small single room which Ssekitoleko was renting with his darling. Sadly, by the time we arrived, she was being helped by a ‘boda boda’ rider to move some of her little belongings to her sister’s home.

At first she was scared, and refused to speak to us. She later accepted but on condition that her face doesn’t appear in our camera.

With tears rolling down her cheeks, in her shaky voice, she goes, “I’m traumatized, I don’t know what I am going to do”.

The boyfriend had gone over four months without paying the Uganda shillings 150,000 rent for the house and the landlord had had enough and kicked her out.

Desire has no permanent job. Occasionally she sews baskets on order, when the orders don’t come, she doesn’t earn.

“When he was leaving he only gave me 150,000 Uganda shillings which I used for my antenatal and other personal needs.” Desire narrated.

At the beginning of this trip, Ssekitoleko hoped to return to a hero’s welcome at Entebbe International Airport from his Japan odyssey. He expected to have an Olympic gold medal around his neck. Instead, he was being greeted on his return by stern faced, unforgiving government officials with strict orders to arrest him.

His semi-relieved mum barely got a chance to hug her tired child, but rather watched him being whisked away like a terrorist by unsympathetic government officials to the criminal Investigations Department of the Uganda police in Kibuli, Kampala.

After hours of questioning, Julius who had not seen his family again was referred to Jinja Road police post where he spent the night on unknown charges.

Such is the irony of life. In under two months, Julius Ssekitoleko has fallen from a symbol of pride, to a prisoner of an unknown crime, as his homeless girlfriend continues to hop from one relative and friend to another for shelter.

Instead of being remembered as a man who represented his country multiple times in global sports competitions, the world will mark Julius Ssekitoleko as the Ugandan weightlifter who disappeared at the Tokyo 2020 Olympic games.

The question remains, what triggered his actions, should he just take the flak, or is there a bigger problem to solve here?

Several Ugandan athletes have over the years disappeared in foreign countries at the first available opportunity with some like boxers Kassim Ouma and Sharif Bogere who disappeared in the United States, eventually succeeding in their careers.

The State Minister for Sports, Hamson Obua has said that Ugandan weightlifter; Julius Ssekitoleko must face disciplinary action for escaping...

‘Missing’ Ugandan weightlifter to be returned home to tomorrow