When your viewing pleasure is ripped apart by a hailstorm of bullets for two hours, it can mean one of two things.

One, it could be a cliché.

Two, that cliché is most likely a Samuel Jackson movie.

Yep, you’ve seen it all before: buildings pancaking into themselves as villains drop like flies and cars getting blown up in a fiery spectacle of vehicular destruction.

Then, when the world is reduced to ashes, Jackson wisecracks: “The Bible says to never takerevenge, toleaveit to the Lord. But I wasn’t prepared to wait that long.”

In the “Hitman Wife’s Bodyguard” (what a mouthful), Jackson doesn’t reinvent his own wheelhouse but instead tools it towards this done-to-death story arc.

In 2017’s “The Hitman’s Bodyguard,” we saw Michael Bryce (Ryan Reynolds) lose his standing as a triple-A bodyguard when his Japanese client gets picked off.

After being reduced to a second-class bodyguard for hire, he gets a gig to escort international assassin, Darius Kincaid (Samuel L. Jackson), from Manchester to The Hague.

It wasn’t that bad, if terrible is your definition of okay.

This time, ahem, Bryce is still traumatized over losing his triple-A status and so ends up on a shrink’s couch.

His therapist (Caroline Goodall) advises him to take a sabbatical at an Italian retreat called Capri.

She does this not to help him get over his loss, but so he can stay as far away from her as possible.

Yeah, he is about as annoying as a homeless guy inviting you over to his place and you can’t say no since ‘his place’ is literally everywhere.

Anyway, he goes for this holiday, which is abruptly abridged by Sonia Kincaid (Salma Hayek).

Like a hard-on at a Nudist Colony, she disrupts everything by shooting up the place and killing everyone in sight. 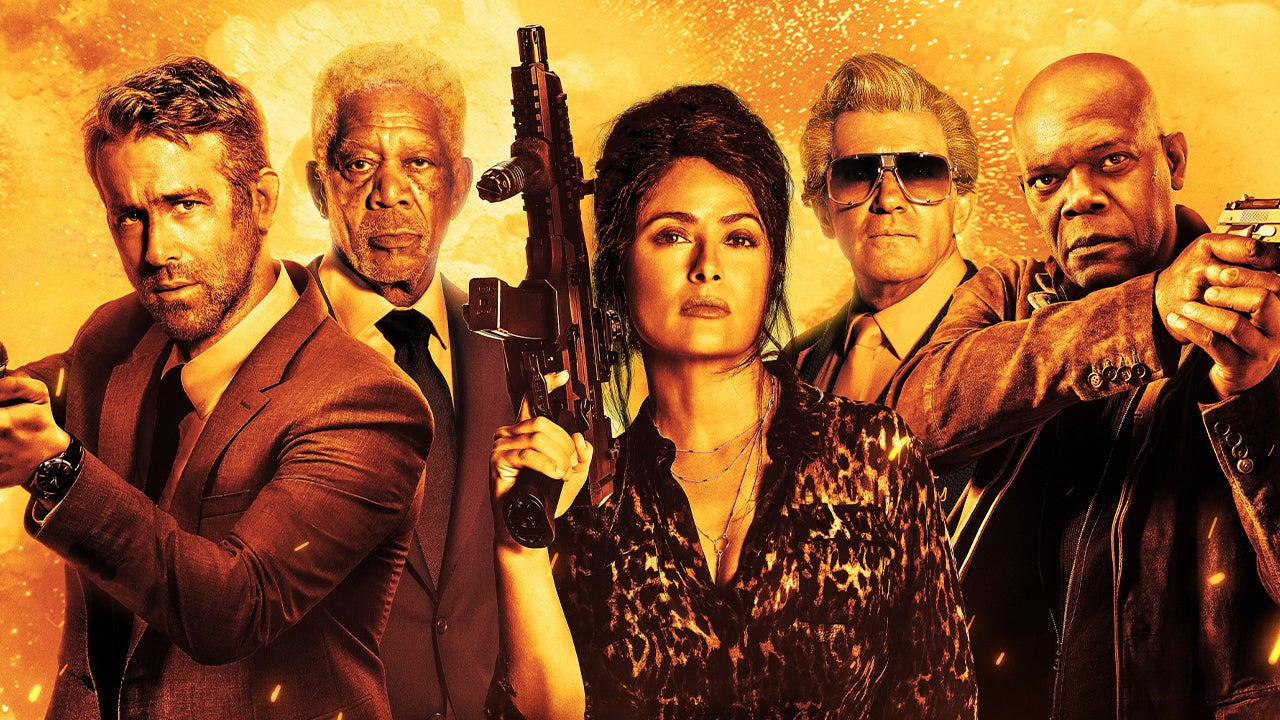 She and Bryce (unfortunately, for us viewers) survive her shooting spree. And they go on to rescue Darius.

Obviously, there’s so much bickering between the three of them that you have to agree with an old idiom: three’s a crowd.

Anyway, Interpol agent Bobby (Frank Grillo) puts them on a mission to save all of Europe.

No. Not from any future Euro football tournaments. But from a crime boss named Aristotle (Antonio Banderas).

I am not sure if “Hitman’s Wife’s Bodyguard” is a spoof or parody on James Bond-type movies, since is treats nothing sublime as sacred.

It’s a complete joke; without the funny. So, in many ways, it simply goes too far(ce).

Hayek is the over the top, but the Bouncing Buddhas on her chest make us thank God for such spiritual twins. So she gets a pass because good boobs always make for good viewing.

Plus, she had some good dialogue:

Sonia Kincaid: I would make a great mother, don’t you think?

Michael Bryce: Oh my God, a child would be so lucky to have you as its host.

Sonia Kincaid:Thank you. It must be your powerful asexuality that makes you such a good listener.

Jackson, on the other hand, continues to break the cardinal rule of using profanity in humor: never use it as a punchline.

Reynolds’s comic timing, sense of irony and satirical choice of words reminds me of Ben Stiller, in Stiller’s prime. But that doesn’t help him save this sinking ship of a movie.

Did I forget to mention Morgan Freeman was in this? Of course I did, that’s because his performance wasn’t even worth mentioning.

It was good to see Antonio Banderas and Salma Hayek together again, twenty years after lighting up the Silver Screen in Desperado.

This movie might have worked better as a sequel to that movie, thereby dispensing with the Hitman and his bodyguard.

Movie Review: “Good on Paper” is not bad on screen

It all starts innocently enough, with you taking a chance on somebody or something new. Then, before you know it,...

Movie Review: The Conjuring is only scary, if you scare easy

Movie Review: Liam Neeson shoots himself dead in “The Marksman”

New presidential directives on easing of the lockdown

Museveni to free boda bodas, taxis as lockdown is eased

President Museveni has announced the lifting of the...

Museveni to free boda bodas, taxis as lockdown is eased