The European Union's plans to unveil a new digital tax plan later this month have now been delayed, a European Commission spokesperson said on Monday

The European Union’s plans to unveil a new digital tax plan later this month have now been delayed, a European Commission spokesperson said on Monday.

“We have decided to put on hold our work on our new digital levy as a new EU own resource,” EU commission spokesman Daniel Ferrie told reporters in Brussels.

The move follows intense lobbying by the United States for the 27-member bloc to drop the levy amid fears that it will largely affect the country’s tech giants.

US Treasury Secretary Janet Yellen said a draft OECD/G20 deal on a minimum global corporate tax rate of 15% includes an agreement “to dismantle existing digital taxes that the United States has regarded as discriminatory and to refrain from erecting similar measures in the future.”

“So it’s really up to the European Commission and the members of the European Union to decide how to proceed,” she said on Sunday. 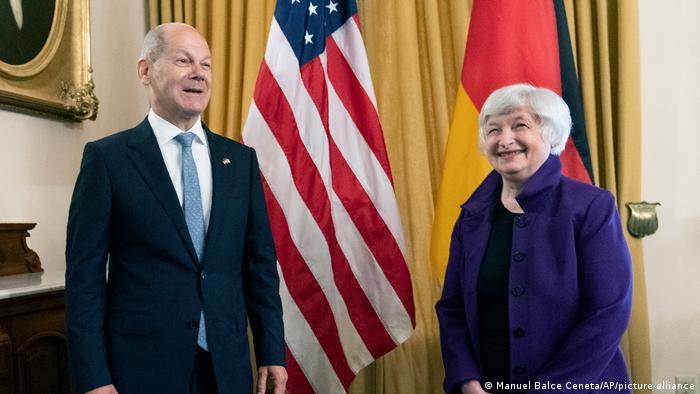 Yellen, seen here with German finance minister Olaf Scholz, has urged the EU to ditch the levy amid a global OECD on how to tax major multinationals.

“But those countries have agreed to avoid putting in place in the future and to dismantle taxes that are discriminatory against US firms.”

Yellen is currently in Brussels for talks with eurozone finance ministers about how to find a way forward.

The Biden administration is concerned that if the digital levy comes to pass, it will complicate the approval of the wider G20 package in Congress.

On Saturday, EU economics commissioner Paolo Gentiloni had said that the EU’s priority was to implement that G20 deal when asked whether the digital services levy plan may be postponed.

Three EU countries — Ireland, Hungary and Estonia — have so far refused to sign up to the draft agreement.

Ireland has succeeded in attracting a number of major US firms to its shores, such as Google and Apple.

Dublin wants to keep its corporate tax rate at 12.5%.

Irish Finance Finance Paschal Donohoe told Yellen about his reservations about the push for a global minimum corporate tax rate, according to his spokesman.

What is the background to the EU’s tech tax?

The idea is to slap a 0.3 percent tax on the goods and services sold online by companies operating in the EU with an annual turnover of €50 million or more.

It was part of a broader effort to raise new funds to help pay back the billions of euros for the bloc’s coronavirus crisis recovery effort, although the proposal to target tech giants with fresh taxes has been on the agenda for many years.

Commission officials said on Monday that they would revisit the proposal later this year.

Tusoma Online comes to the rescue of stranded students and parents

As Uganda comes to terms with the effects of a second total lockdown due to the raging deadly Coronavirus disease,...