by Samuel Muhimba
in Ethiopia, News

The Ethiopian ambassador to Uganda Alemtsehay Meseret address the press

The Ethiopian Ambassador to Uganda, H.E Ambassador Alemtsehay Meseret has condemned the decision by Egypt and Sudan to take the Ethiopian Renaissance Dam (GERD) issues to the UN Peace and Security Council.

She says resolving the issue at African Union (AU) would have been an opportunity for the three countries to strengthen the Union and show the world that Africans can solve their problems by themselves.

Meseret made the remarks on Friday, during a press briefing on current developments in Ethiopia to journalists from major media houses in Uganda. 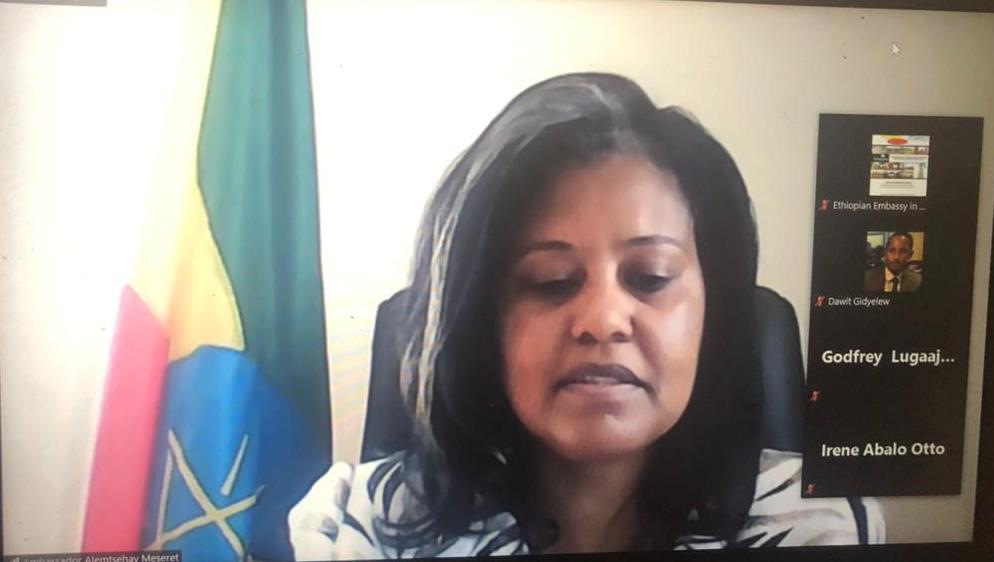 Meseret’s remarks come days after Ethiopia announced it had started the second phase of filling its giant hydro-power dam on the Nile River’s main tributary. Egypt and Sudan are opposed to this, arguing that this could lead to drought and seasonal flooding in countries sharing the river.

Ethiopia generates 77 billion meter cube of water per year which is 86% of the water contribution of the Nile. However, Its plan to impound the river with a fraction of the annual inflow has caused diplomatic standoff with Egypt and Sudan.

Seeking resolution, Sudan and Egypt have taken the GERD issue to the UN Peace and Security Council after mobilizing support from the League of the Arab States. Meseret says this step unnecessarily internationalises the matter.

Meseret says Ethiopia had welcomed involvement of the African Union to solve the differences Ethiopia, Egypt and Sudan have over the dam because they are ardent supporters of the notion ‘African solutions for African problems’.

“To the contrary and against the wish of Africans, both Egypt and Sudan relentlessly campaigned to take the issue away from the African Union in the midst of its efforts. For Ethiopia, this approach of undermining the African Union is unacceptable. Ethiopia strongly believes that the AU is capable of facilitating the negotiations and brings the process to a successful outcome.” Meseret says.

She goes on, “In the last one year, the trilateral negotiation under the auspices of the African Union has offered the three countries to better understand each other’s concerns and address some of the outstanding issues.”

The ambassador further notes that issues on the later stage of the Dam, specifically the amount of the water to be released during drought season are being used as a reason for turning the issue into an international concern.

“During the deliberation, most of the countries expressed that the three countries should negotiate with the auspices of the African Union and work together to reach to a win- win outcome.”

Meseret adds that the GERD is purely a development project and also a source of cooperation to the Nile riparian countries.

“It is a symbol of equitable and reasonable utilization and common aspirations of the riparian countries to utilize their common resource.”

Launched in 2011, GERD is a $4.6 billion project which according to Ethiopia provides extraordinary national significance for the future of its economic and energy security. 65 million Ethiopians, which accounts nearly 60% of the population, have no access to electric power.

The huge dam is expected to generate 6.4-GW (6450MW) after completion. Ethiopia says, last year, in the first filling the Dam’s reservoir retained 4.9 cubic metres of water without “interrupting the continuous flow of water to the lower basin.”

Love or loathe Museveni, it is a tribute to his political skills that Uganda has so far avoided the existential...

Journalist arrested for calling upon Egyptian President to resign