Top 10 most shocking cases of cannibalism

by NP admin
in Featured, Lifestyle

Cannibalism is one of the most hated if not feared vices by almost all cultures of humanity. The idea of someone feeding on another human is sickening in itself, but that doesn’t mean it doesn’t happen. There have been shocking incidences of people eating fellow human beings, either by sheer insanity or in cases of extreme starvation. Rumours of cannibalism happening in the Nazi concentration camps are the most publicly known cases of cannibalism in recent history. Here is a look at other incidences that caught media attention.

1.The Uruguayan Rugby Team
This is the only justified case of cannibalism in this list. The plane carrying members of the Old Christians Club Rugby Union of Uruguay was headed to Chile when it crashed in the Andes.

There were 45 passengers on board, eight of whom died during the crash. The peaks were frozen, and the team had no gear to hike with to safety. They stayed on the mountain for 72 days with no food. Search teams couldn’t spot the remaining part of the fuselage in the white snow either.

Rescue only came on Dec 23 of that year after three members of the team hiked to Chile to get rescued. During those 72 days, 19 more people died from their injuries and the searing cold.

The remaining ones survived by feeding on the flesh of their dead teammates. It was the only way to stay alive, and they later confessed that it was really hard and sad for them.

2. Armin Meiwes
Armin Meiwes is also known as the Master Butcher of Germany. Meiwes was a computer expert who had fantasized about eating a human being for a long time until he advertised on the internet in March 2001 that he wanted a well-built young man that was ready to be eaten.

43-year old Bernd Brandes accepted to be eaten, and the two men went to Meiwes home on Mach 9th, where the victim took lots of sleeping pills. Meiwes first cut off Brandes’ penis and fried it before both men ate it. 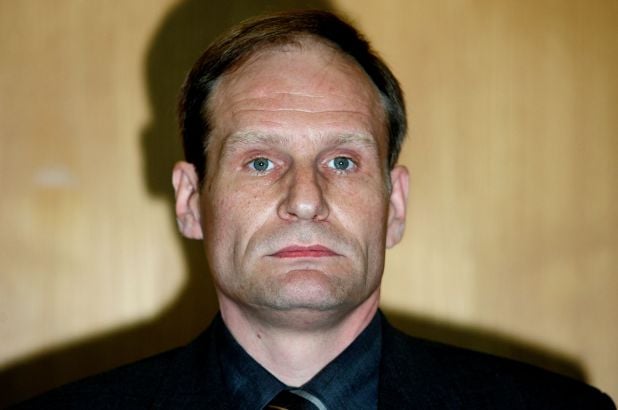 Meiwes then killed Brandes with a kitchen knife and cut him to pieces that he put in his freezer and cooked 20kg of it before the police caught up with him. It was during his trial that prosecutors discovered that cannibalism is not a crime in Germany. He was still accused of murder and disturbing the dead, which was complicated because the victim had agreed to be killed.

3. Peter Bryan
Peter Bryan is probably the most famous cannibal in the UK after the details of the horrific killings he committed emerged in 2004. He was first sent to jail for murder when he killed the daughter of his former employer with a hammer after being sacked.

However, in 2004 after being released from prison, he attacked Brian Cherry, killed him and started cooking his flesh. The police found him cooking his victim on the stove. When he was taken to a maximum-security psychiatric facility, he attacked another inmate whom he confessed to wanting to cook and eat.

4. Andrei Romanovich Chikatilo
He was also called the Butcher of Rostov, executed in 1994 for killing 52 people. He had a troubled childhood that started when he had an ejaculation while fighting with a girl during his teenage. He started extracting sexual satisfaction from violently killing young women and sometimes boys. The police were unable to pin any other murders on him directly until 1992.

When he was finally arrested, he confessed to having murdered at least 56 people, and the semen samples found at the scenes of the crimes confirmed it. He had also eaten the private parts belonging to some of his victims, but it is not clear why he evolved to cannibalism.

Rudy Eugene
On May 27, 2012, videos emerged online of Rudy Eugene eating a homeless man named Poppo’s face on a road in Miami. It is believed that Eugene was under the influence of some drug when he attacked the poor man. He allegedly accused Poppo of stealing his bible before telling him that he was going to kill him.

He then threw Poppo into the sidewalk and started eating his face. He chewed more than half of his face before the police shot him dead to save the victim. The homeless man’s face was rescued and treated with surgery, but it was still hard to recognize him. It is still unclear what Eugene was on.

Stephen Griffiths
This was another UK serial killer that named himself the Crossbow Cannibal during his trial. He was a student at Bradford University studying Criminology when he was finally arrested for his depraved crimes. He had been jailed earlier on two different occasions for trying to kill people.

While in prison, he confessed that he wanted to be a serial killer and that cannibalism was a normal part of human life.

He killed three women between 2009 and 2010, although he confessed to having killed six. His arrest came after the CCTV cameras of his apartment caught him shooting a woman with a crossbow before dismembering her body. The remains of his first victim were never discovered, so he probably ate all of it. He had also eaten the flesh of the last victim.

Luka Magnotta
He is also known as the Canadian cannibal. He made headlines all over the world as a video of him killing his second victim circulated online in May of 2012. Magnotta, a Canadian male escort, was obsessed with killing and was even confronted by reporters for posting videos online of kittens and puppies being killed.

In May 2012, he lured Jin Lin, a Chinese student, to his apartment in Montreal and attacked him with an ice pick until he died.

He recorded everything, including dismembering the body then wrapped and sent the parts to schools and politicians. He also filmed himself eating part of Lin’s body with a knife and fork before fleeing to Germany, where he was arrested while reading news articles about himself in a restaurant.

The South African Cannibals
It is not every day that a person comes to the police and confesses to being a cannibal. The man brought himself to a police station in the province of Kwazulu Natal carrying a woman’s leg and hand and said he was tired of eating human flesh.

The police also arrested two other suspects found with human body parts, some of which were being boiled in a pot. One of the men claimed to be a local witchdoctor and is believed to have used human body parts as part of the ingredients of his medicine.

The Human Flesh Pastries Of Brazil
Jorge Beltrao Negromonte was sentenced to 23 years in prison in 2012 for the murder of a homeless woman in the city of Garanhuns in Brazil. He had lured her into his home, claiming that he needed a nanny before killing her and using her flesh to make pastries.

He did it with the help of his wife and mistress, both of whom were also sentenced to 20 years in prison. The saddest revelation was that he had sold some of the pastries to his neighbours. The three were part of a cult that believed in saving the planet by reducing the human population.

The LFM Cartel
Nazario Moreno, aka The Craziest One, was the founding father of the La Familia Michoacana drug cartel, which alongside its branch, The Knights Templar cartel, terrorized the Mexican state of Michoacana for many years. He was declared dead by the government in 2010 but was actually alive until 2014.

During his time as the cartel leader, LFM had an initiation ceremony that involved eating human flesh. New recruits to his cartel were required to eat the hearts of murder victims to prove their loyalty to the cartel. It was just one of the many alleged incidences of cannibalism in the Mexican cartel wars.