Writers are torn individuals, riven by the choices which turn them against themselves. For, like Achilles in the epic poem The Iliad, writers must descend within themselves to discover a destiny which is theirs to lose.

Let me explain this a little further.

Achilles’s mother, the goddess Thetis, confronted him with two destinies between which he had to choose.

The first involved him staying in his father’s house. Which would mean that his life would be cushioned with a care and comfort presupposing a long and fruitful life. A life many of us choose: marriage, family and possibly a white picket fence against which the cute little family terrier can raise a hind leg & pee.

In this life, Achilles could gain wealth then use that wealth to acquire more wealth. All the while, he could grow his left brain through reading books which stocked his mind with ideas.

These ideas would help him grow his family’s estate, once he inherited it, and thereby rule his father’s kingdom.

Thereafter he could live a life of domestic bliss. A life in which the world would accord him the respect accorded to an elder.

Or he could fight.

If he chose to fight, he would be killed before the war’s end. However, before he was lowered into his grave, he would win such glory that his name would live in song forevermore.

Achilles chose to fight and thus achieve immortality at the cost of his life.

When a writer writes, that writer chooses to fight. For each word verb, adverb or gerund combines into an emphatic fury against the dying of a light immortal.

What is this light immortal?

Well, if you read KakwenzaRukirabashaija’s gripping roman à clef“The Greedy Barbarian” then you would’ve basked in a light being shed on the politics of our otherwise blessed nation. By extension, this light would reveal our frailties and possibilities in ways which endure against the death of a nation. 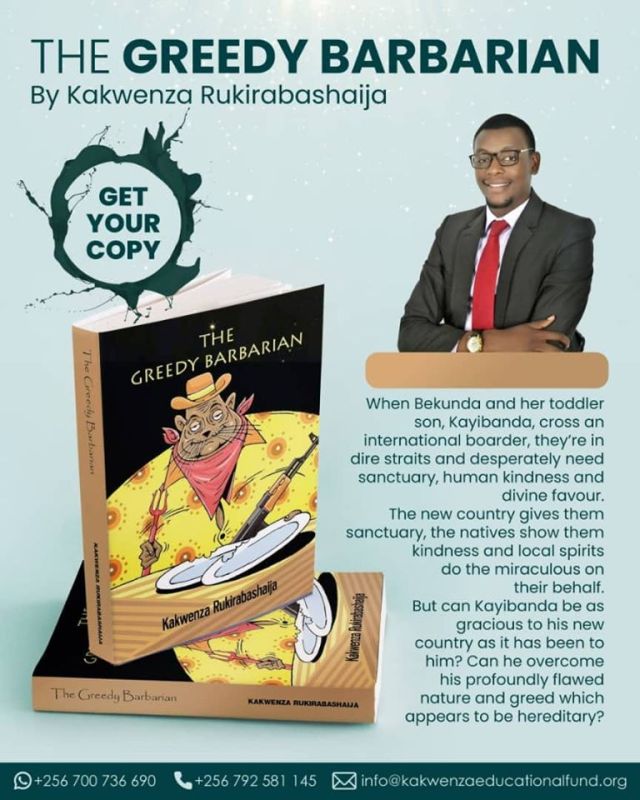 It was a light the Ugandan authorities found too bright to bear and so Kakwenza was arrested at 6:30am on the morning of the 18th day of September 2020, over publishing the tell-all book “THE BANANA REPUBLIC”.

Although interspersed by ideological and personal reflections, it is a book about his arrest and detention by the UPDF’s Chieftaincy of Military Intelligence.

During his detention, for more than two weeks, Kakwenza is blindfolded using a beanie or a small round tight-fitting skullcap. Then he is introduced to the world infamous wickedness of Abu Ghraib & Guantanamo Bay.

Only, this is torture Made in Uganda.

Straining at the leash he finds himself chained by, his mettle is tested and his will almost fractured.

Waterboarding, beatings and mockery shape a cycle of physical and psychological torture that leaves Kakwenza’s candle burning at both ends.

It’s a miracle he got out alive.

While in detention, he found other victims who were Ugandans. But also foreigners: Rwandans, Somalis and others easily targeted because of their unclear legal statuses.

Or because they were caught on the wrong side of justice simply by being in the wrong place at the wrong time.

Shackled at the ankles and hands above his head to stretch his body to near breaking point, Kakwenza’s tormentors seemed to be out to make him taller than he already is.

This method of torture is an adaptation of Greek Mythologies’ Procrustean Bed.

In this, Procrustes had an iron bed on which he made his victims lie. If a victim was shorter than the bed, he forcibly stretched the victim’s body to fit the whole bed!

So we are talking about medieval punishment, which takes us back to the Dark Ages.

The situation was not lightened by the tragic-comedy of a CMI medical doctor asking Kakwenza if he had any complaints!

Which recalls the two doctors, Ivor Lang and Benjamin Tucker, who were called in to examine Bantu Stephen Biko after he got brain damage during interrogation by Apartheid’s security police.

Over the five days in which the doctors attended to Biko, they treated Biko’s head injuries as a visible sign that he was in perfect health!

Biko was to die of the injuries he sustained when he was tortured.

To add more gallows humor to this situation, it turns out that Kakwenza’s tormentors had not taken the time to read the book for which they arrested him.

Even when they finally read the book, according to Kakwenza, they had zero comprehension of bombastic words like “superannuated” which Kakwenza, a grandiloquent wordsmith, favors.

The gist of Kakwenza’s story is not in its telling, it is in the unmasking of a tale that must be told. For the torture of a writer, whose job is to mirror society, is ultimately the torture of humanity.

To leave it helpless, broken and too afraid to speak out against a regime which is fast becoming more Aminist than Amin ever was.

Wall: ULS has handled 200 cases of kidnaps, has monitoring team

Pheona Nabasa Wall, president of Uganda Law Society (ULS) has revealed that the body is taking steps to address the...

Denzel Washington is reduced to The Little Things