by Crispus Mugisha
in Sports

Aucho had been summoned for extra use during the next Cranes fixture in Malawi owing to the fact that he was ruled out of the immediate game with Burkina Faso after he was given marching orders in Uganda’s tie with S. Sudan that was won by the latter.

With Aucho ruled out of the qualifier with Burkina Faso, his presence in camp was only to galvanize the squad in the next fixture.

Alas, after his call up to the camp and his arrival to Uganda, FUFA issued a statement that they had done away with him and also supplied him a return ticket to facilitate his travel back where he came from- Egypt.

In a statement from FUFA, they confirmed that the player was “dismissed from Uganda Cranes Camp for failure to adhere to the National team Code of Conduct and Fufa Circular dated 4th March 2021.”

“Aucho refused to board the official means of transport organized to pick him from Entebbe International Airport to the team camp at Cranes Paradise Hotel-Kisasi and has not even reported to camp since his arrival in the country. The player’s club Misr El Makkasa and Egypt Football Association have duly been informed about the decision and a return air ticket has been issued to him for his travel back to Egypt.” 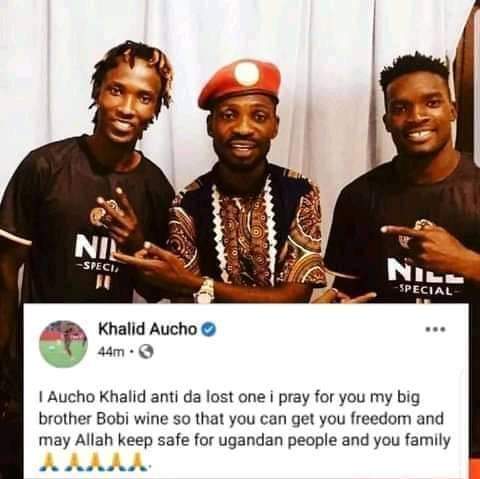 By the next day, members from the National Unity Platform (NUP) Political party had started ring-fencing the case and driving a narrative that Aucho had been dismissed for being in bed with the party.

In a post which he later deleted, NUP principal Rober Kyagulanyi Ssentamu alias Bobi Wine claimed that Aucho was a victim of the “state’s prosecution of those that stand with the people”.

“FUFA, our football authority, claims that Khalid (Aucho) was dismissed for alleged indiscipline. But it appears, as can be deduced from these screenshots, that there is more to Khalid’s fate than meets the eye,” Bobi Wine stated, attaching screenshots on Aucho’s Facebook posts.

Indeed, Aucho has been posting on his social media pages his undying love for Bobi Wine and another NUP MP-elect Solomon Kayemba.

Aucho made it clear that Bobi Wine was his choice for the presidency.

“The Midfielder has in recent times distinguished himself as an athlete who is conscious of the injustices orchestrated against his fellow citizens by the State and its institutions,” Bobi Wine claimed.

“He has been using his social media channels to speak out against this injustice and to sympathize with the victims. It is unfortunate that he is now the latest victim of the persecution of those who stand with the people,” Bobi Wine added.

Aucho gave them the wrong signal

NUP is not to blame for falling for Aucho’s bait, as the player-led them on when following the debacle, he dashed to his social media channels and hinted he was not thrown out over indiscipline.

“Even if it means never playing for the national team ever again, it’s okay with me because at least I’ve served my country enough now and I can retire from international football knowing I stood for the truth,” Aucho remarked.

“I’ve accepted their decision and I’ll take it in good faith. I wish them good luck in the two games, but Fufa should also normalize respecting players because it’s we the players who sweat out there. You just can’t tarnish my hard-earned name like that. I don’t think I’m indisciplined as they’re claiming,” he added.

However, within the denials, Aucho confirmed he skipped protocols and went home to see his family.

“I reached at a half past 2 pm, then I told the person they had sent to pick me that I was not feeling well and immediately needed to see a doctor ascertain why my body was not functioning well. I knew I had to move to camp, I mean, that’s why I traveled here in the first place, but I also needed to at least briefly see my family. I have to see my kids bless me whenever I’m home because I take so much time away from them,” Aucho admitted to flouting rules.

“I had just spent four hours in the country and I’m punished severely? Yet some players have spent 12 and others over 24 hours but they haven’t been penalized or anything,” he added.

In an interview with goal.com, Aucho confirmed he supported Bobi Wine for president because it is “my constitutional right”.

He however distanced Bobi Wine from his dismissal, which could have prompted the NUP team to reverse their action.

FUFA maintained that Aucho’s dismissal had no political motivation behind it and that the same has happened to their goal-keeping coach Fred Kajoba hence Aucho is no exception irrespective of his political beliefs.

“The decision taken by FUFA against the player has no political inclination. The player has been dismissed from the current Cranes camp but may be considered for future national team engagements,”

“Fufa enforces regulations with all its nine national teams just like it was for goalkeeping coach Fred Kajoba who was asked to leave camp as the Uganda Cranes prepared for the Chan tournament.”

Magogo takes swipe at Bobi and NUP, calls them ignorant

FUFA boss Moses Magogo would later in a stronger statement hit out at Bobi Wine and his ilk, citing they are ignorant about the management of sports in this COVID-19 pandemic.

“Any person drawing tribal, religious, and political affiliations as the basis for any National Team technical or administrative decision that is good for the entire team is either ignorant of how sports are managed or just following a bandwagon or an enemy to the sport,” Magogo castigated.

“The National Football Team (Uganda Cranes) is the pride of every Ugandan and shall always be protected and respected by all of us. As FUFA we are just custodians and handlers of the team,” he added.

Shortly after Magogo’s strong statement came an apology from Khalid Aucho which could have dealt a blow to Bobi and NUP.

In a statement issued to FUFA, fans, and Uganda Cranes teammates via his Twitter handle, Aucho noted that he is remorseful and will take full responsibility for the mistakes that led to his suspension from the national team camp ahead of Afcon qualifiers ties against Burkina Faso and Malawi.

With the apology out and glaring, NUP fanatics on social media started hurling insults at Aucho for accepting to be cowed, they had expected him to go a long way in making the point they were making.

A few moments after that, Bobi Wine pulled down his post in which he made claims of Aucho being suspended for political reasons and that ended the long story that started with Aucho leading NUP on before dumping them on a very cold planet.

Uganda Cranes captain, Denis Onyango has threatened to throw in the towel on the national team after comments by FUFA...