As early as 4am, Ugandans begin to line up in hope of acquiring a Ugandan passport, so that they can move abroad.

Nankya Rebecca, who spoke to Nile Post said that she had failed to find jobs in Uganda, and that is why she applied in a labour externalisation company, to work as a security guard in United Arab Emirates.

“I was a teacher but I lost my job when Covid-19 came and schools were closed. I want to work abroad but I did not have a passport,” Nankya said.

Nankya is one of the many Ugandans who have braved the cold to line up at the passport office as early as 4am on Tuesday morning. 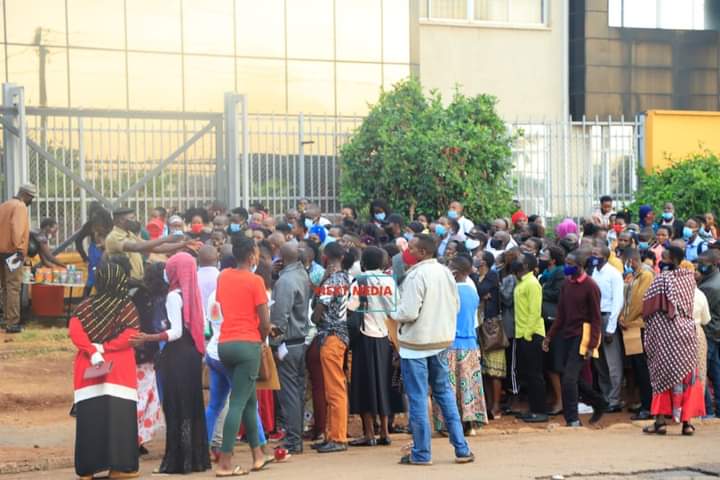 By 8am, the queues are already snaking out as hundreds of Ugandans could be seen lining up outside the Ministry of Internal Affairs offices to apply for passports.

Did the e-passport project fail?

Government says this is a temporary development

Speaking to NBS Television Morning Breeze on Tuesday, Minister for Internal Affairs, Jeje Odongo said that the long queue at the passport office are just temporary and that government will solve this soon.

“The externalisation of labour was opened, so these external recruiting companies pick individuals and dump them at the Ministry hoping that they will be able to attend to them even if they aren’t scheduled for an interview,” Odongo said.

Odongo said that applying for a Ugandan passport is still one of the easiest activities one could engage in because they have made it possible for everyone to apply for passports in the comfort of their homes or offices.

“Obtaining a passport is now easier. You can apply for the passports in the comfort of your house or office. We have the capacity to produce 1,000 passports every day. We schedule to interview and clear 300 people daily,” Odongo said. “What you are seeing are Ugandans who come, even when they are not on schedule, hoping that they will be worked on.”

The Minister of State for Primary Health Care Dr Joyce Moriku Kaducu has said that Non-Communicable Diseases (NCDs) are on...