Flavia Nambi: A passionate midwife who worked on her days off gone too soon

by Beatrice Nyangoma
in Health, News

In 2018, I was hired by Emic Films, [a video production team contracted by [email protected]], to identify a midwife [working in the eastern region of Uganda] who could tell a story about [the importance of childhood] vaccination. It took me over two weeks to find a midwife who could really bring out the story. I met over six midwives but I could not find someone who could tell the story of why vaccines matter. Most of them were camera shy while others were just too ‘busy’ to spare time.

I was losing hope but made one last try. On a Saturday afternoon, I traveled to three health facilities in the eastern part of Uganda. [Most health workers do not work weekends, but patients were lined up at the] Nankandulo Health Center IV in the Kamuli district. I asked the patients how the services were at the facility. They answered, “We have ‘Musawo’ Flavia. She treats us well.” [Note: “Musawo” translates to “Doctor” in English.] 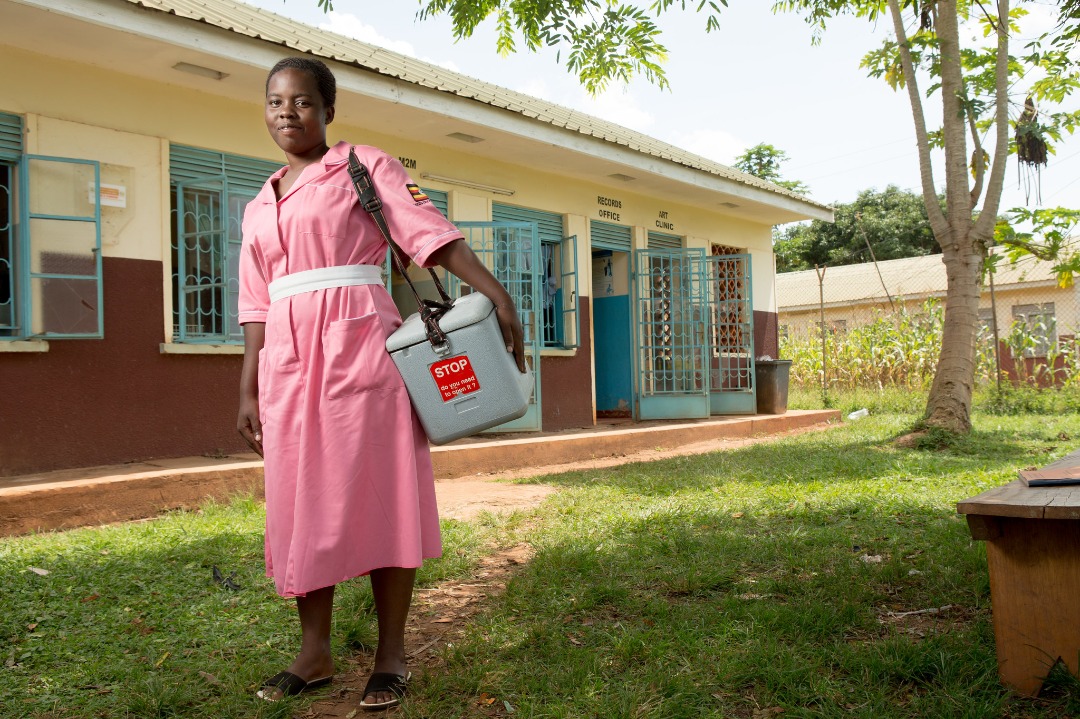 I was eager to see the Flavia they were talking about and, before I would ask where she was, she came in to check on one of the mothers who had delivered [a child] the previous night. She was there to give the baby a shot of the vaccine. With a beaming smile, she asked me whether I was sick or I had come to check on a patient? In my mind, I knew this was the perfect person I was looking for.

We later had a chat and got to know each other. My first question was what motivates her to be on duty on a weekend, to which she answered, “The people need me around. I am always here even when I am off duty. It means a lot when they come and find someone to attend to them regardless of the day and time.” Flavia was passionate about helping mothers give birth and immunizing children.

“The people need me around. I am always here even when I am off duty. It means a lot when they come and find someone to attend to them regardless of the day and time.” -Flavia Nambi, midwife and nurse

She was featured in a [email protected] video about why vaccines matter. At the time we shot the video, she was five months pregnant but she had a miscarriage soon thereafter. We became close friends and would call each other often. Flavia later conceived again but tragically lost her life while giving birth [to that child].

At the time of her death, [Flavia] had been promoted to head a newly expanded health center, Kagumba Health Center III. According to her supervisor, Moses Lyagoba, Flavia had traveled by motorcycle to the district office to pick up vaccines to restock the health center the day before she passed away.

It is not common to find a health worker [in Uganda] who works due to passion and not because they are paid to so. I found Flavia one-of-a-kind. She always put her patients before herself. At Kagumba Health Center III, she had already made an impact — especially with attitudes of parents towards immunization. One mother commented, “I would take a child for medical attention, but Flavia would talk to me about family planning and general health care. I will miss her.”

Francis Balitamuto, [Flavia’s husband], has not yet come to terms with the passing away of his wife and [mother of his children]. “We looked forward to our third born.”

On the fateful day, Francis wasn’t around [as] he was at work [in a distant town].

“She told me that she wasn’t going to deliver at her facility, the Kagumba Health Center, because she was the only midwife there and their maternity ward was not fully [operating]. She opted [to give birth at] a private facility. We had saved enough for a private clinic so we knew everything would be fine.”

Francis received a phone call from his sister-in-law announcing the death of the baby. “By the time the phone call came in, Flavia was still alive. The news of the passing of the baby hit me hard but I consoled myself that my wife is fine. I wished I could travel from Jinja to Kamuli on foot to see my wife, but there were no transportation means. I called back and asked how my wife was doing. I was told that she had passed on.”

He says that Flavia was his source of inspiration. “Flavia was a pillar of strength. I do not earn much, so we all depended on her income. She helped me construct our home.”

Francis notes that Flavia had plans of starting up a maternity home for mothers in labor. “She had even bought land [for] its construction. She would tell me that she was disturbed that many mothers had to travel long distances for [pre-natal care and delivery].”

He adds, “Our children, Innocent and Annabelle, are now having a hard time. They are staying with my sister [because I work far away.]”

Flavia was also paying tuition for Ruth, her younger sister… [to pursue] a university diploma in medical record keeping. “Flavia inspired me to get a health-related degree. She cared a lot about mothers and babies.” With Flavia’s passing, Ruth’s education now hangs in the balance.

Beatrice Nyangoma Alice Mumpi, an accountant with one of the big pharmacies in the city centre, gave birth to her...

Happy mother’s day to those who died while giving birth, to those have failed to conceive

I want to have babies, Fabiola reveals