President Yoweri Museveni has commissioned the new Isimba public bridge that links the districts of Kayunga and Kamuli and officially opened it to traffic.

President Yoweri Museveni has commissioned the new Isimba public bridge that links the districts of Kayunga and Kamuli and officially opened it to traffic.

Speaking at the function, the President expressed happiness over the completion of the project that he said would be crucial to the people in the region.

“We now have Jinja, Karuma, Pabbo, Masindi, Pakwach, Laropi and Paraa bridges across the Nile that we have constructed. I think it is wise and visionary for Ugandans to ensure they support NRM for doing what had defeated many governments here,” Museveni said.

The President also applauded the Chinese government for the friendship, support and loan that was extended to Uganda for the construction of the Isimba dam, power line and the new bridge.

The construction of the bridge last year stirred controversy when the Speaker of Parliament, Rebecca Kadaga accused some government officials of stealing the money meant for the bridge.

A smaller bridge had earlier been constructed but was not open to public for use, a move that Kadaga fought.

Speaking about the bridge and its controversy on Thursday, Kadaga insisted that she had to fight tooth and nail to ensure it is constructed to benefit the people of Busoga.

“To me, it didn’t make sense where there was a small bridge at that place because it was serving none. The original design was supposed to have this bridge but they had put a small one. I made noise and put pressure to the President as the Minister of Finance informing him of the breach of the contract,” she noted.

The Speaker of Parliament, who also doubles as the Kamuli Woman MP described the new bridge as a New Year gift to the people of not only Luuka and Kamuli but the entire Busoga region.

“This is the gateway to the hinterland of North Busoga and is going to make such a big difference since this area is landlocked. This is really a new year gift to the people of Busoga,”Kadaga said.

The Kamuli Woman MP noted that the other alternative, which is the Kampala-Jinja highway, would see one take many hours because of the congestion. 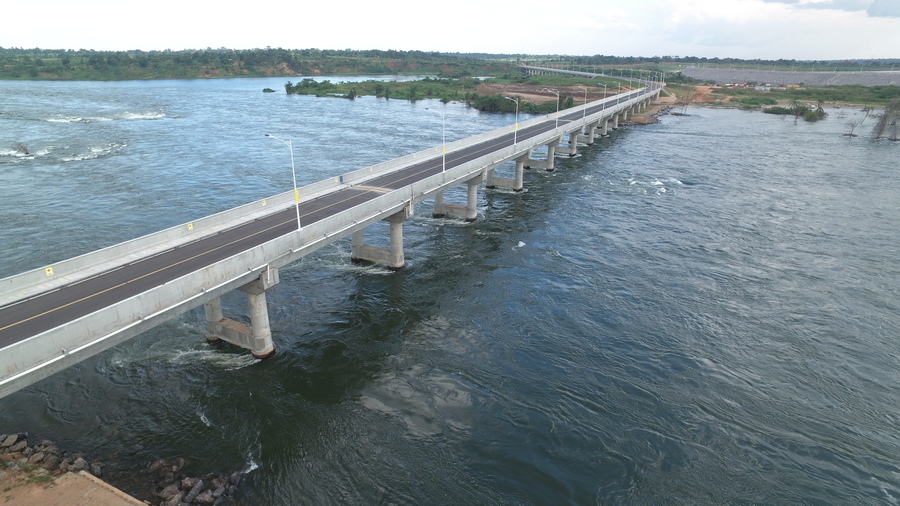 She however urged government work on the roads like the Bukaitabala- Kamuli – Bukungu linking to the bridge which she said are in a sorry state.

“It is a long term promise together with the Bukungu ferry which have not been handled and I hope by putting tarmac here will see the other roads also worked upon sooner than later,” she said.

The Isimba public bridge that connects Kayunga and Kamuli districts across the Nile was constructed by China International Water and Electric Corporation, the company that constructed the 183MW Isimba Dam.

The first bridge traverses from the left bank on Kayunga side to Koova Island and is 433m long whereas the second one traversing from Koova Island to the right bank on Kamuli side is 457.25m long.

The new bridge is part of the shs2.1 trillion 183MW Isimba Hydro Power Plant and Isimba-Bujagali Interconnection Project constructed using a loan from the China Export-Import Bank (85%) and the Uganda government( 15%).