Amid political violence warnings, we need to enhance calls for peaceful elections 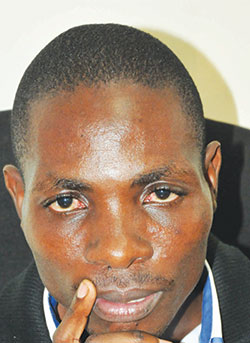 Elections are essential part of democratic process and a means to change leaders peacefully. But as January 14th 2021 when Ugandans will elect a president and MPs, followed by other related elections nears, there are already concerning political violence warnings.

Due to forthcoming elections, tension is escalating among different sections of Uganda-those in ruling government, opposition, civil society/human rights activists and general public.

We are witnessing increasing clashes between security and mainly political opposition-then ordinary people. Growing mistrust not just between Government and Ugandans, but also Government looking at development partners with suspicion is real.

Evidence to pin astute rights defender for all without discrimination is still scanty.

Arresting prosecution insists, investigations are incomplete, inciting Ugandan activists and international community to describe Opiyo’s charges as frivolous and politically-motivated aimed at not only intimidating activists, but close civic space.

Well, lawyers involved in Opiyo’s case- will lift the veil soon for the world to know. To cover forthcoming elections, media practitioners are required to acquire special accreditation-something that merits fear.

SOPs instituted to curb spread of COVID-19 have exacerbated situation knowing that they’ve been largely selectively enforced by police to disadvantage some politically and harm people who are supposed to be saved from COVID-19. Where we are, everyone seems charged.

Those holding positions of power abuse it with sheer impunity. With some security personnel hell-bent on muzzling dissenting voices-using disproportionate force characterised by tear-gas, manhandling of civilians and at times, using live-bullets to quell even diminutive protests, the population is increasingly being radicalised.

We now have civilians who’ve developed hard skins to confront armed security with lethal weapons, barehanded, or armed with sticks, stones and of recent, I saw a civilian attacking a police-woman with a harmer I had never dreamt of a country where again, anybody would be undressed by a fellow Ugandan because of colour.

That is Uganda’s story today. But how did we come here? There are myriad drivers of widening discord in our country-some of which I present; Uganda’s breed of politics means that winning a public office translates into a card to provide livelihoods to office-bearers and closest associates.

Pubic officeholders use them to maintain patronage systems, control resources and allotting jobs or public contracts often not-based-on-merits or efforts at societal expense. Economic inequality and corruption with direct links to unemployment have also contributed to high levels of discontent among marginalised groups.

But those issues notwithstanding, we must all acknowledge need to peacefully, advance our varied political agendas. Elections give us opportunity to realign our leaderships, but it shouldn’t be a death matter.

Instead of trading empty-promises, abuses and brutality rooted in guns’ might, let’s debate, and contextualise issues different competitors present. Peaceful elections and aftermath depend on all stakeholders; Electoral Commission, political leaders/contenders, security agencies and the public.

Uganda will absolutely remain after elections and we remain the same people in our communities-why should we harm ourselves for a season? All political leaders must know, they have primary roles in educating supporters to promote peace, dialogue and consensus cultures.

I maintain, there cannot be beneficiary from violence as its effects catch-up with everyone from wealthiest to poorest in Uganda. Ugandans, let’s gear-up for elections, vote our preferred candidates, but peacefully for our collective benefit.

The writer is the programs manager

The runners up in the Kawempe North election, Suleiman Kidandala has said he is going to appeal against the court...

Nyanzi case against Muhammad Nsereko is a non-starter, should be dismissed- EC asks court