In a televised address, Mr Keïta said he was also dissolving the government and parliament.

“I want no blood to be spilled to keep me in power,” he added.

It comes hours after he and Prime Minister Boubou Cissé were taken to a military camp near the capital Bamako, drawing condemnation from regional powers and France.

“If today, certain elements of our armed forces want this to end through their intervention, do I really have a choice?” said Mr Keïta.

“I hold no hatred towards anyone, my love of my country does not allow me to,” he added. “May God save us.”

Earlier, the mutinying soldiers took control of the Kati camp.

There has been anger among troops about pay and over a continuing conflict with jihadists – as well as widespread discontent with the former president.

Mr Keïta won a second term in elections in 2018, but there has been anger over corruption, the mismanagement of the economy and a dispute over legislative elections.

It has prompted several large protests in recent months. A new opposition coalition led by the conservative Imam, Mahmoud Dicko, has called for reforms after rejecting concessions from Mr Keïta, including the formation of a unity government. 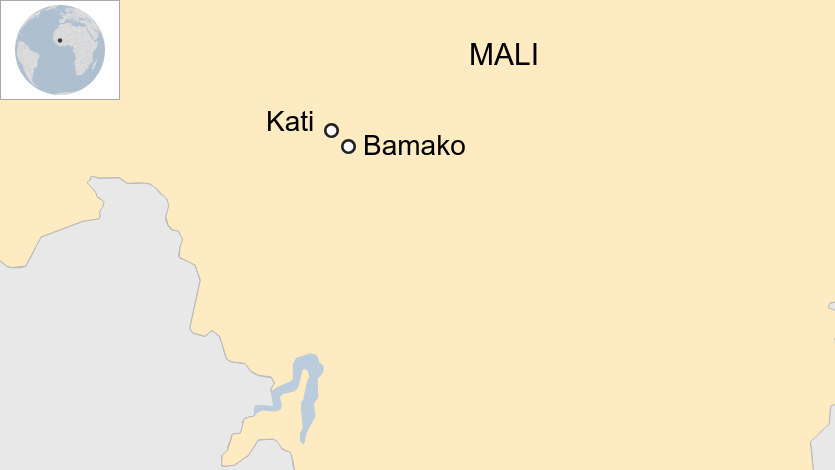 What do we know about the mutiny?

It was led by Col Malick Diaw – deputy head of the Kati camp – and another commander, Gen Sadio Camara, BBC Afrique’s Abdoul Ba in Bamako reports.

After taking over the camp, about 15km (nine miles) from Bamako, the mutineers marched on the capital, where they were cheered by crowds who had gathered to demand Mr Keïta’s resignation.

On Tuesday afternoon they stormed his residence and arrested the president and his prime minister – who were both there.

The president’s son, the speaker of the National Assembly, the foreign and finance ministers were reported to be among the other officials detained.

The number soldiers taking part in the mutiny is unclear.

Kati camp was also the focus of a mutiny in 2012 by soldiers angry at the inability of the senior commanders to stop jihadists and Tuareg rebels taking control of northern Mali.

What has the reaction been to his detention?

When news first broke of the mutiny, the United Nations and African Union both called for the release of those held by the soldiers.

The Economic Community of West African States (Ecowas), a regional body, also said its 15 member states had agreed to close their borders with Mali, suspend all financial flows to the country, and eject Mali from all Ecowas decision-making bodies. In recent months, Ecowas has been trying to mediate between Mr Keïta’s government and opposition groups.

The UN Security Council is to meet on Wednesday to discuss the latest developments in Mali.

Mali’s former colonial ruler, France, was also quick to condemn the president’s detention, and Foreign Minister Jean Yves Le Drian urged the soldiers to return to barracks. Mali is a key base for French troops fighting Islamist insurgents across the Sahel region.