President Museveni, who is also the commander in chief of the armed forces has commissioned a sand model and wargame centre at the Uganda Senior Command and Staff College in Kimaka, Jinja District.

President Museveni, who is also the commander in chief of the armed forces has commissioned a sand model and wargame centre at the Uganda Senior Command and Staff College in Kimaka, Jinja District.

The Uganda Senior Command and staff college is a training facility for senior commanders in the Uganda Peoples Defence Forces (UPDF), including the army, air force and Special Forces.

Speaking at the function, Museveni hailed the Indian Association of Uganda for funding the construction saying it shows the association between the UPDF and the Indian army.

“Our relationship with India has existed for centuries. We were colonised together by a small group of people who came from Europe, but when we all woke up, and the small groups ran away.During that time, we fought together first against the Japanese in Burma. The heroic Indians are the ones who stopped the westward expansion of Japan at the famous battle of Kohima,”Museveni said.

The president said the epitome of India’s importance to Uganda is engraved in the fact that Mahatma Ghandi’s ashes were immersed in Jinja.

He also applauded the Indian community for the continued standing relationship with Uganda.

“I thank you all for this important donation. The facility will greatly add to the value of training in the UPDF. We also thank the Indian Army for assigning the Indian Military Advisory and Training team to Senior Command Staff College. We are very happy to be associated with the Indian Army. They are an army with long standing military experience,” he added.

The president said the war game centre will be of great benefit in terms of adding to the value of training in the UPDF.

The Chairman of the Indian Association in Uganda, GN Mohona Rao said the donation is an appreciation of the Indian Community’s peaceful, pleasant and profitable stay in Uganda.

“Our pleasant and profitable stay in Uganda is as a result of the peace that we enjoy boundlessly, thanks to the selfless and tireless efforts of the UPDF,” he said.

“This humble contribution from us is the least we could do as symbol of our appreciation to the highly disciplined UPDF for the role they play in safeguarding the peace that we enjoy in Uganda.” 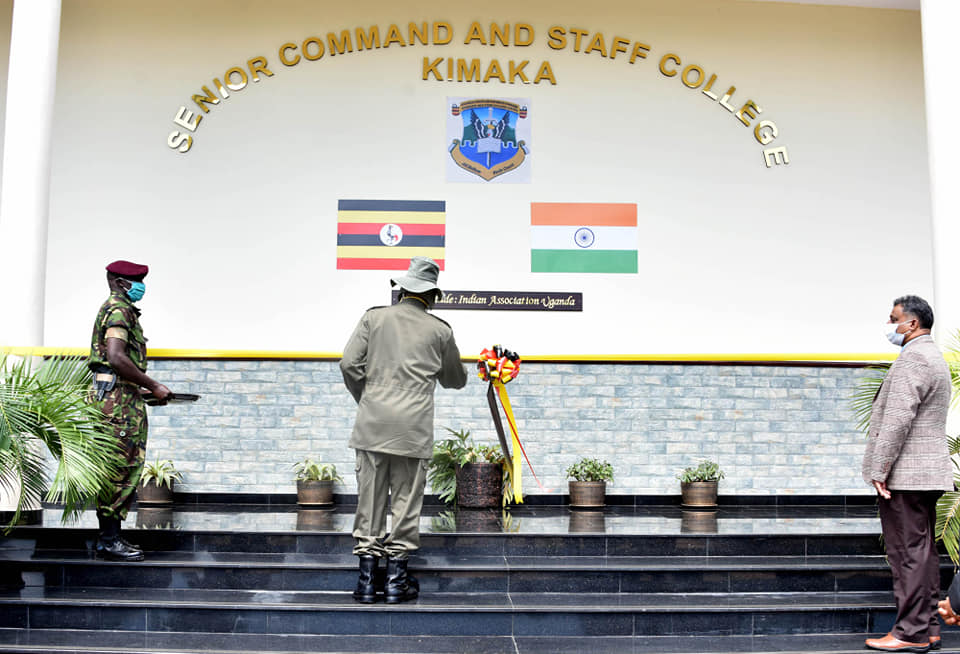 The Commandant for the Senior Command and Staff College, Lt Gen Andrew Gutti said the war center is a big achievement to the UPDF institution.

“The wargame center will not only be of immense benefit to the college fraternity but also the UPDF at large. It will be instrumental in training officers in tactical, operational and strategic decision making and in testing new concepts in tactical and operational warfare,” Lt Gen Gutti said.

Also present were diplomats including Nimisha Madhvani, the Ugandan ambassador to Denmark and Shri Sanjiv Kumar Goel, the acting Indian High Commissioner in Uganda and a few other selected members of the Indian Association in Uganda.

According to Wikipedia, a wargame is a type of strategy game that simulates warfare realistically, as opposed to abstract strategy games such as chess.

Wargames may be miniature figurines on a tabletop, board games or video games.

Wargames typically use maps that depict various battlefield terrain features such as woods, hills, fields and streams, with a grid or location system superimposed over this to regulate the movement and positions of the games’ pieces, each of which represents a specific military formation such as an infantry brigade or artillery battery.

Many wargames recreate specific historic battles, and can cover either whole wars, or any campaigns, battles, or lower-level engagements within them.

Many of them simulate land combat, but there are wargames for naval and air combat as well.

Health Minister, Dr.Jane Ruth Aceng has finally let the cat out of the bag and declared intention to contest as...

Every entrepreneur must learn the art of selling an idea