by Frank Semata
in Tour & Travel

The Uganda Tourism Board (UTB), a body mandated to market destination Uganda has resorted to Hollywood stars to market Uganda’s tourism potential to black Americans in the United States.

With a new initiative dubbed ‘Back to the source’ UTB aims to bring home African Americans back to their roots (Africa) and Uganda in particular so as to have a feel of the country and appreciate the beauty held their-in so they can tell the story to the world.

On the list was Koshie Mills, popularly referred to as ‘Mama Africa’. Koshie is a powerful media guru who in her work has created the Diaspora Dialogues movement and platform which aims to encourage interaction between Africans and people of African descent from across the world. Diaspora Dialogues encourages people of African descent to visit the continent of their origin.

Koshie came to Uganda for an eight-day excursion. As soon as she stepped foot on Ugandan soil out of the chartered Aero link plane at Murchison falls Airstrip, she seemed smitten with the country around her.

She checked into her hotel room at Pakuba Safari lodge. Later that afternoon, she embarked on a boat cruise on the Victoria Nile headed for the mighty Murchison Falls. Koshie was wowed by plenty of wildlife within the waters and on the river banks like the crocodiles, elephants, hippopotamus and the birds. She could barely contain her excitement as the boat neared the falls.

That, coupled with an evening game drive through the plains of Murchison falls national game park, left her admiring and asking for more.

She admitted that the plenty beautiful giraffes in the park caught her eyes but still wondered why they don’t know much about this beautiful country before urging UTB to put more effort in publicizing the country.

The team then headed to Baker’s Fort Patiko, a touristic asset so rich in history. The stories of slavery that was carried out by the Arabs in the area are so devastating. When Koshie heard of these stories from our tour guide Ronald Okello, she almost broke into tears. 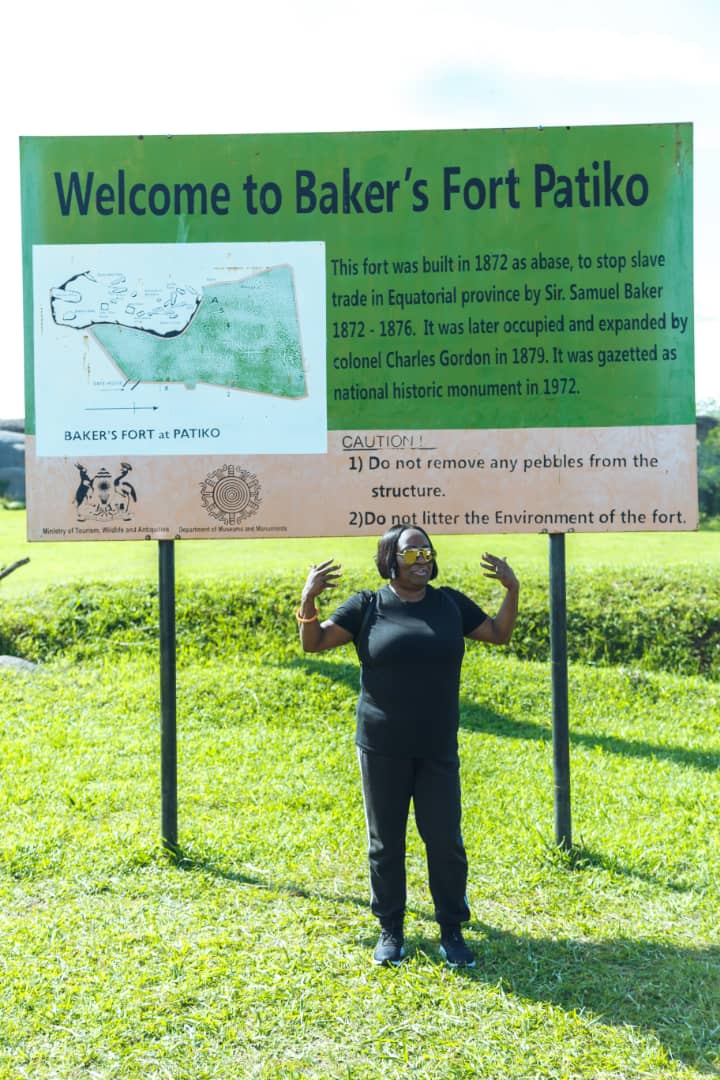 The fort was built in 1872 as a base to stop slave trade by Sir Samuel Baker. Fort Patiko, located in Aswa, about 40km from Gulu District and was gazetted by government as a national historic monument in 1972. It has been maintained as an eco-friendly area and with its original rocky buildings (gate of no returns) and rocky outcrops still in place.

Karamoja was the next stop on the itinerary and a haul from Gulu through Kitgum and then Karamoja seemed longer than she (Koshie) had expected.

The 8-hour ride through the bumpy and slippery murrum roads enhanced her experience of the country. The warm welcome with a heavy meal as we checked in at Apoka safari lodge late night left nothing but smiles on her face as she appreciated the welcoming people of Uganda.

A treat to the Karamojong community the following day, learning about the culture and the Karamojong people’s way of life was something else. Koshie was then treated to a community dance where she engaged and got taken away by the dance style and energy of both men and women who jump freely and majestically with pride. 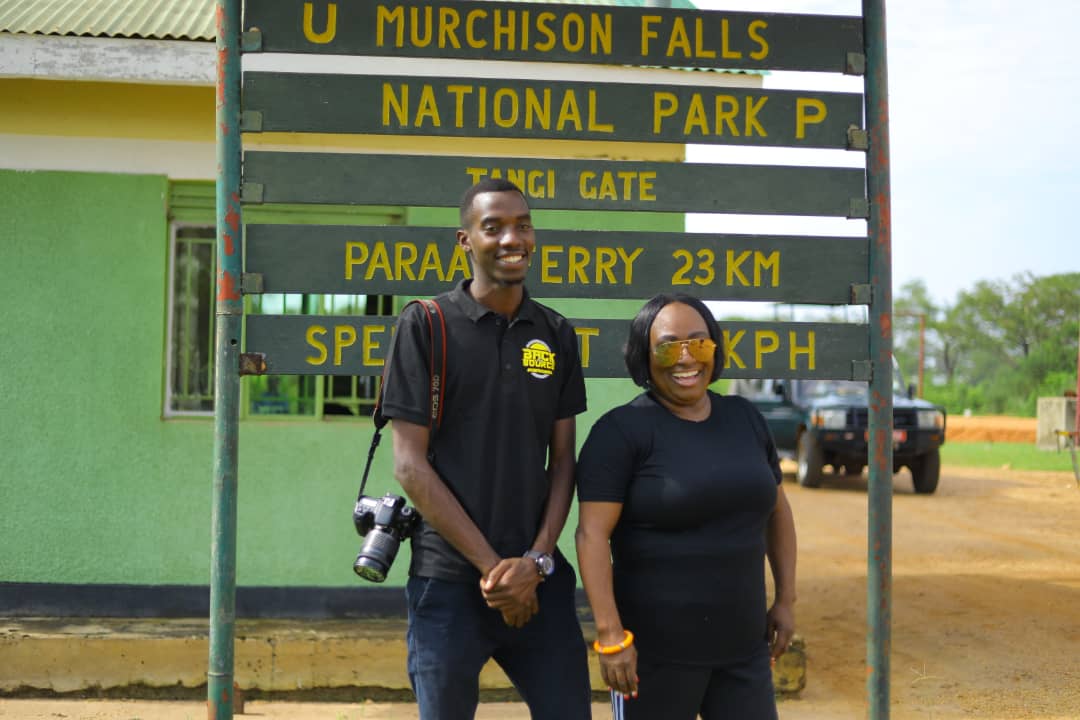 During a press conference held at Sheraton hotel in Kampala, Koshie admitted that Uganda is a true pearl of Africa and she wondered why Hollywood hasn’t come to do movies here with the country’s abundant beauty at every turn.

Koshie was effusive in her pleasure, “It’s been the most heartwarming, overwhelming eight-day experience. I am screaming to everyone about Uganda, my Internet is going crazy and the feedback is all positive most of them saying they never knew Uganda was so dope.”

Fanny Martinez, the initiator of the Back to the Source tours explained the purpose of their project and her experience on an excursion with Koshie Mills.

“The intention of the Back to the Source Tours platform is that we create themed or standard group trips with the intention of guiding and promoting destinations and experiences using digital marketing techniques for the purpose of showing off on the internet with beautiful imagery of Uganda and Africa overall and there was no better person to be our first guest than media mogul and creator of the Diaspora Dialogues Mrs. Koshie Mills,” Martinez said.

“We are truly passionate about Uganda because of her friendly people, her graceful nature and wildlife, her fertile grounds which produce real organic food, the variety of culture, and because the development of Uganda carries a lot of potential in so many different sectors. Uganda is my paradise on earth, truly. We just came back from Kidepo National Park and I felt I was breathing in God’s canvas. It was amazing beyond words!”

“My highlight during this fam trip with Koshie was the falls of Murchison Falls. I have been there several times but had never been to the falls, a totally stunning view to witness. It made my trip quite priceless. We should really focus on saving the Falls. Our tourism goals really depend on the falls remaining the powerful magical falls that they are,” Martinez concluded.

UTB’s marketing manager, Clare Mugabi said that the Back to the Source initiative will help Uganda reach its target of 4m tourists by 2020

According to the Uganda National Bureau of Statistics, Uganda received 1.8 million tourists in 2018, up from 1.4 million in 2017. An amount of USD. 1.4 Billion was registered in 2017 through tourism revenue and now the board is hopeful that it will even multiply in years to come with the new marketing strategy targeting the Afro Americans.

“In line with our mandate of promoting Uganda as the preferred destination, we are carrying out different initiatives especially in resource markets, our target is to bring in 4 million visitors by 2020 and one of the things we’ve done was to partner with the back to the source tours.”

“The North American market is one of the core market priorities we are targeting to bring in most of the numbers followed by Germany speaking countries and the U.K, and emerging markets including Japan, Israel, China and the Gulf states.”

An American of Ugandan decent, Ntare Guma Mwine Mbaho was appointed as the goodwill cultural tourism ambassador by the Ministry of Tourism, Wildlife and Antiquities to further position the pearl of Africa favourably in the core source markets of North America. He is already in the country with Shannon Amos and will be kickstarting their excursion soon enough.

Tourism companies to get one movement permit during lockdown

Uganda Tourism Board (UTB) has revealed that movement permits for the private sector tourism vehicles shall be restricted to one...

Cheptegei eager for Uganda’s next moment of glory in Ostrava