The "hero" dog wounded in the U.S. commando raid that culminated in the death of Islamic State leader Abu Bakr al-Baghdadi is getting a White House homecoming next week

The “hero” dog wounded in the U.S. commando raid that culminated in the death of Islamic State leader Abu Bakr al-Baghdadi is getting a White House homecoming next week, President Donald Trump said Thursday.

Trump revealed that the military dog, a Belgian Malinois, is named “Conan” — heretofore a closely guarded secret because the information could be used to identify the special forces unit that carried out the raid in Syria over the weekend. 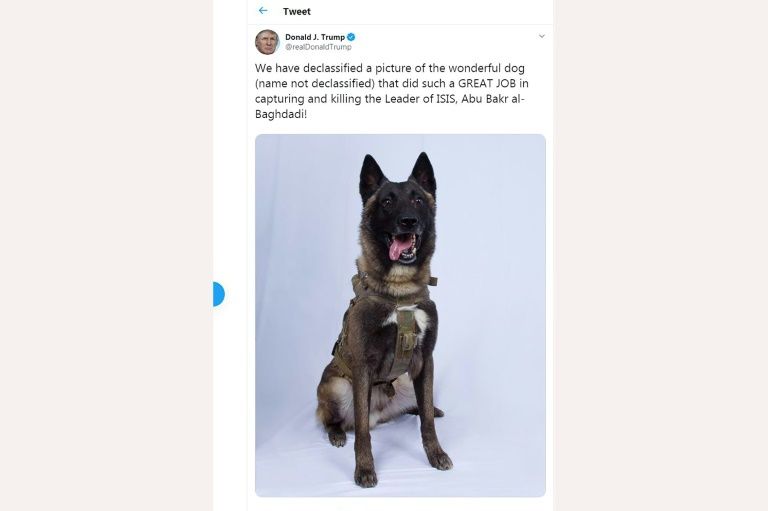 Trump posted a photomontage on Twitter showing him bestowing a medal of honor on the dog with the legend: “AMERICAN HERO.”

“Very cute recreation, but the ‘live’ version of Conan will be leaving the Middle East for the White House sometime next week!” he tweeted.

It was unclear what else lies in store for Conan, but it has been noted that Trump is the first U.S. president in more than a hundred years who doesn’t own a dog.

Conan was injured chasing Baghdadi into a dead end tunnel in his Syrian hideout, where the cornered IS leader detonated a suicide vest, killing himself and two children, according to the U.S. account.

The chairman of the Joint Chiefs of Staff, General Mark Milley, said earlier this week that the hero dog was expected to make a full recovery and was already back with his handlers.

The photomontage that Trump retweeted was produced by the conservative publication Daily Wire.

It used a White House picture of the president draping the Medal of Honor, the nation’s highest military medal, around the neck of James McCloughan, a former army medic distinguished for saving lives under fire during the Vietnam War.

Trump says US knows true Identity of new IS leader

Just a day after the Islamic State terror group revealed the name of its new leader, President Donald Trump said...

US President Trump announces death of IS leader al-Baghdadi

Airstrike kills deputy leader of IS in Somalia

Senior IS Leader Killed in Strike in Syria