Ugandans who played key role in struggle for Independence

Several Ugandans sacrificed their energy and effort to ensure that the country became independent. Some of these were even imprisoned for their activism.

As Uganda celebrates 57 years of independence, we look at some of the key influential figures in the struggle for self rule.

He became its first President, and Abubaker Kakyama Mayanja was the party’s first Secretary General.

Other key figures of the UNC included Apollo K. Kironde who was the legal advisor to the party.

Towards the end of 1951, Ignatius Musaazi rented part of the ground floor at Musajjalumbwa’s house, a house on what is now known as Musajjalumbwa Road near the Lubiri (palace) in Mengo.

The house belonged to the late Yakobo Musajjalumbwa, a former Treasurer (Omuwanika) of the Buganda kingdom.

This house become a centre of political activity and in 1952 witnessed the birth of the Uganda National Congress. UNC would later become one of the leading torch bearers in the struggle for independence.

He was Kabaka of Buganda from 22 November 1939 until his death.

He was the thirty-fifth Kabaka of Buganda[1] and the first President of Uganda.

The foreign press often referred to him as King Freddie, a name rarely used in Uganda.

In 1962 Uganda became independent from Britain under the leadership of Milton Obote.

Under the country’s new constitution, the Kingdom of Buganda became a semi-autonomous part of a new Ugandan federation.

The federal Prime Minister was Obote, the leader of the Uganda People’s Congress, which entered a governing coalition with the dominant Buganda regional party, Kabaka Yekka.

The post of Governor General was abolished with the attainment of republican status and replaced by a non-executive President, a post first held by Mutesa.

In 1964 the coalition between Mutesa and Obote’s parties collapsed over the imposition, against Mutesa’s will, of a referendum to decide the fate of two “lost counties”.

Residents of the two counties voted overwhelmingly in favour of their return from Buganda to Bunyoro.

He was overthrown by Idi Amin in 1971, but regained power after Amin’s 1979 overthrow. His second period of rule was marred by repression and the deaths of many civilians as a result of a civil war known as the Ugandan Bush War.

While in Kenya, Obote became involved in the national independence movement. Upon returning to Uganda in 1956, he joined the political party Uganda National Congress (UNC), and was elected to the colonial Legislative Council in 1957. 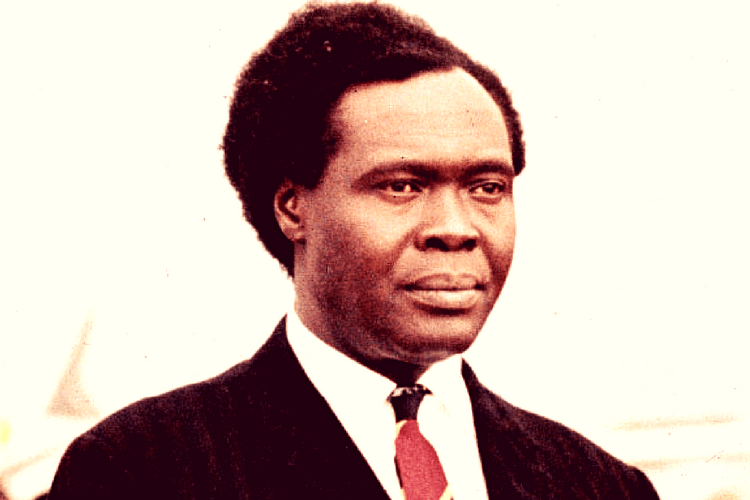 In the runup to independence elections, Obote formed a coalition with the Buganda royalist party, Kabaka Yekka. The two parties controlled a Parliamentary majority and Obote became Prime Minister in 1962.

He assumed the post on 25 April 1962, appointed by Sir Walter Coutts, then Governor-General of Uganda.

The following year the position of Governor-General was replaced by a ceremonial presidency to be elected by the parliament.

Mutesa, the Kabaka of Buganda, became the ceremonial President, with Obote as executive prime minister.

William Nadiope was born on April 29, 1910, the son of Yosia Gabula Nadiope, the Paramount Chief of Busoga, whose family is traced back through countless generations of hereditary rulers to two twin ancestors, living in Ethiopia.

His father died in 1913 and, as he was only three years old, regents governed until he was finally installed as Kyabazinga (King) of Busoga, in 1930.

He was educated at Mengo High School and Trent College, Derbyshire, where he started law studies, only to have them interrupted when he was called back by the Busoga government to take his father’s office.

During the war he joined the Uganda Rifles and served in Burma and Libya, rising to sergeant-major, but prevented from gaining an officer’s rank because he was serving in a South African controlled unit.

Career After the war he went back to local government and became a public relations officer in the Community Development Department at Kampala.

In October 1963 he stood for election as President of Uganda and might have carried the day with his wide support throughout the country.

But Milton Obote endorsed the Kabaka of Buganda and spent the whole night of October 3 arguing, cajoling and persuading his party caucus until he secured the Kabaka’s election by 62 votes to 27.

Sir William had to make do with the Vice-Presidency, which he held until the constitutional crisis of April 1966, when Obote seized the opportunity of dismissing him the day after the assassination attempt on Obote on December 19, 1969; he was detained along with Benedicto Kiwanuka and a number of other prominent politicians.

Mugwisa: The man who was appointed Minister after the president saw him through the State House window

There is a litany of stories of how people joined the Uganda government cabinets right from the days of colonialism,...

Part 1: The power of songs in Ugandan Presidential Politics (Videos)