First son and Presidential advisor on special operations Lieutenant General Muhoozi Kainerugaba has praised the Kony rebels and called them great in a tweet he put out today morning at 10:01 a.m.

In his tweet, Muhoozi said there is no denying that the rebels were great even though they committed unspeakable atrocities. 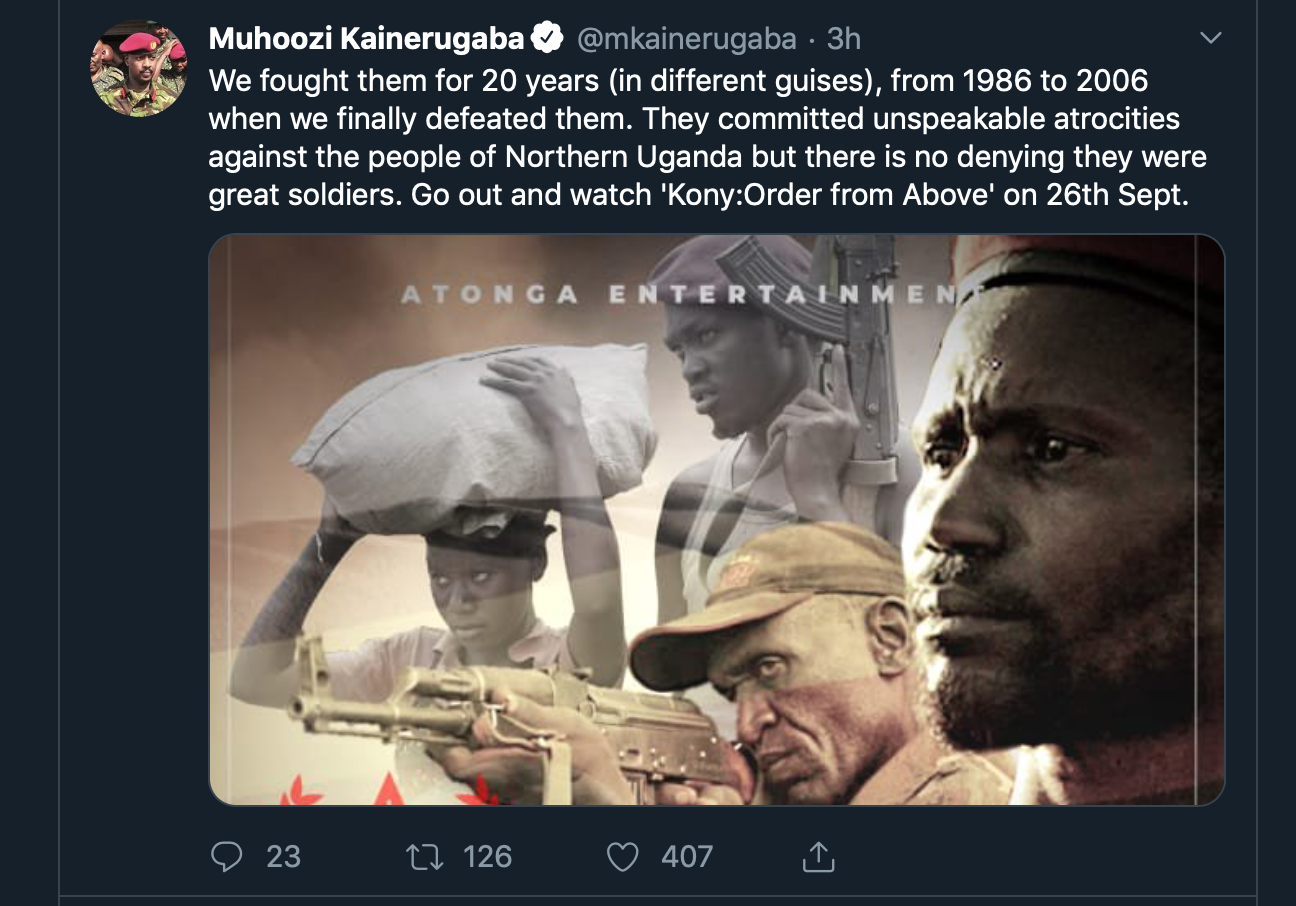 We fought them for 20 years (in different guises), from 1986 to 2006 when we finally defeated them. They committed unspeakable atrocities against the people of Northern Uganda but there is no denying they were great soldiers. Go out and watch 'Kony:Order from Above' on 26th Sept. pic.twitter.com/BhETIbsbCa

Muhoozi was mobilizing his 122.8k followers to turn up for the movie premier of the movie on Kony titled, ‘Kony: Order from above’ that will be showing in the cinemas on 26th September 2019.

Kony: ‘order from above, the movie’
This Ugandan movie has been selected for the 92nd Academy Awards. Popularly known as the Oscars and given annually by the Academy of Motion Picture Arts and Sciences (AMPAS) in the United States of America (USA), the awards are an international recognition of excellence in cinematic achievements as assessed by the Academy’s voting membership.

This marks the very first time Uganda is submitting an entry to the prestigious awards following the launch of the seven-member UASC in July this year.

Muhoozi plans attack on Kony
In 2008, Muhoozi was among the planners and executioners of ‘Operation Lightening Thunder’ a surprise military offensive against LRA hiding in Garamba forest, Eastern Congo, even though this didn’t go as planned.

In August 2003, an armored battalion of the Presidential Brigade, commanded by Major Kainerugaba Muhoozi, and the 21st battalion of the UPDF clashed with Joseph Kony’s LRA rebels at the Soroti-Katakwi borders.

In the clash that took place in Aparisa near Achuna on the Soroti-Orungo road, five rebels were killed and 13 child captives rescued.

It was reported that rebels who were herding an unspecified number of children carrying heavy loads of food, were heading for Lira district to link up with the LRA chief of staff, Tolbert Tabuley.

Human rights lawyer and activist Nicholas Opiyo reacted with outrage, wondering, “Are you suggesting that the LRA were ‘great soldiers’? If that is what you are implying, it is the most tone-deaf thing to say to the people who suffered under the UPDF and LRA in N.Uganda.”

Are you suggesting that the LRA were 'great soldiers'? If that is what you are implying, it is the most tone-deaf thing to say to the people who suffered under the UPDF and LRA in N.Uganda.

In a follow up with the Nile Post, Opiyo goes on to argue that the LRA, “Were simply rebels, not soldiers. Soldiers fight in an army not a rebel group. To call them soldiers is to put them on equal footing with the UPDF – which we agree they are not.

Secondly, the LRA committed great atrocities against the populace and any one who calls them great, gives the perception that they appreciated the work of the LRA.

To the victims of this war like myself and many of my kinsmen and women, it is very insensitive to do the two things above. This is not for our fragile sensibilities but for the our revulsion of the atrocities of the LRA.”

The Muhoozi tweet is continuing to attract more reactions that revisit the war in Northern Uganda that was one of the world’s longest running.

The High Court in Kampala has ruled that National Environmental Authority was right to allow sugarcane growing on Bugoma Forest...