President Museveni will Monday launch a high-level summit on Public-Private Partnerships in Kampala, the same which his government has disowned.

The summit slated for Monday at Kampala Serena Hotel is organized by the World Bank and United Nations Development Programme (UNDP), with intending, participants asked to part with between $350 (Shs1.2m) and $950 (Shs 3.5m).

“Given the above misrepresentations, I advise that Your Excellency, you disassociate yourself from the event,” he wrote on August 6, 2019.

Kasaijja in another letter dated September 13, 2019, stated that government will not participate in the said summit and will not even channel any resource since they are ‘not part of the event’.

“The organisers of this event should continue with their own arrangements without involving the government of Uganda both as a co-organiser and co-funder of the event,” Kasaijja writes.

“Government of Uganda is not part of the organisers of this conference. The government has also received information from the above UN agencies and other development partners that this conference was not their official event,” Kasaijja adds. 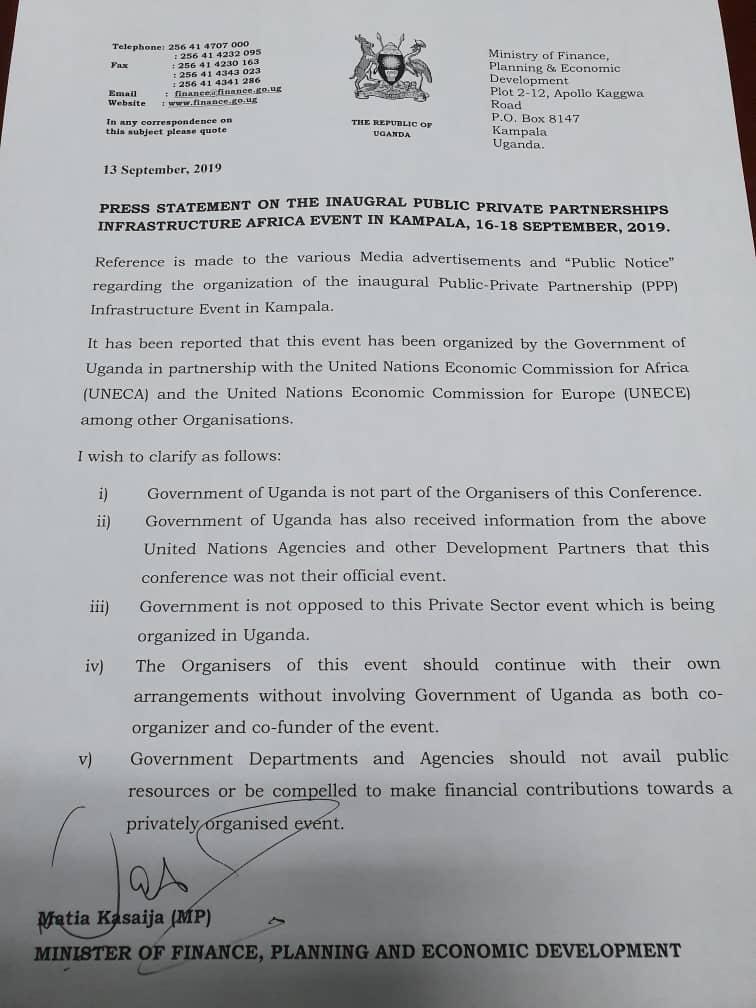 The finance minister now decrees that no government agency should part with any financial motivation towards the conference or its organisers.

Kasaija is listed as a speaker at this summit, alongside Foreign Affairs Minister Sam Kutesa, whereas President Museveni has been listed as a guest of honor.

Museveni’s handlers yesterday confirmed that the president will grace the event that starts at 9am.

Other speakers expected according to the event website include; Kenyan opposition leader Raila Odinga, UN residential coordinator of Uganda, Rosa Malango and UNDP resident representative in Uganda, Elsie Ettafuah among others.