If this isn’t the most kafunda thing you have heard this year, please recalibrate your social status. You are obviously a lot more ghetto than you previously thought.

If you have heard anything that is more typically obviously, evidently borne from idle minds filled with cheap gin, you must be a Rocko Defense Sechuliteh.

This is what might have happened. There are four middle aged men, one of them being Paul Mutabaazi, father of the MC Fresh Kid. He is acting bashful at all the attention he has been getting lately. When his son became a music star he became something of a feature of attention, but not quite a celebrity, not quite a star. These are kafunda men; they are not hip hop fans. They like their music old, melodic, and twangy– so they go with country, reggae and lingala. As far as they were concerned, the baby was just chanting discordant nonsense on the TV. 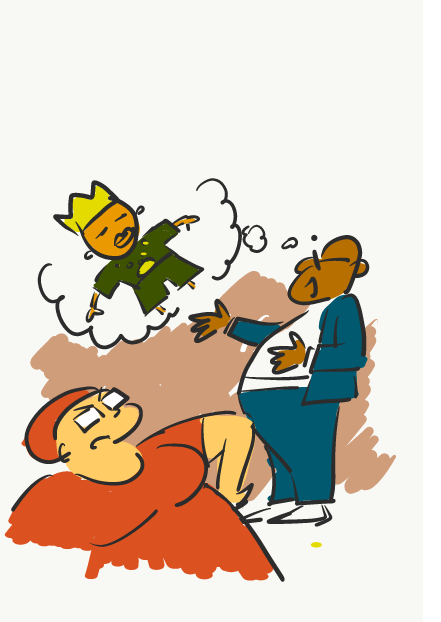 They made fun of Paulo because his kid was squeaking rancorously all over television and it amused them. Paulo grinned and took it all in, riposting, “Hey, whatever hustle works.”

Then in came the ministrations of the honourable state cabinet member, and the hullabaloo that ensued, and with it an elevation in attention, Fresh Kid became a news figure, a public talking point and a true celebrity.

Now Paulo was sitting pretty. The burden of school fees lifted off him. Plus a nice income from, well, from wherever musicians get incomes from– I know we don’t pay royalties to anyone and Fresh hasn’t got any concerts at Serena, clothing lines, commercial endorsements or even a TED talk– but this is a kafunda. They don’t do accounts here.

It is two low benches, a swaybacked tabled between them, lit by a lamp that can’t be bothered to emit more than half a watt at a time and serves crude liquor in the slums, if not in the rural areas.

While you guys are sending shots to that table of MUBs slay queens hoping for a rubadub, your driver, askari, gardener, primary school-teacher, village provost, rolex seeker etc are here, in this kafunda; while you are getting lit, they are in the shadows.

It is as dark, spartan, dinghy and befuddled with shadow and smoke as the minds of the men and women within it so they don’t question the financials of the Fresh Kid record deal; they just assume Paulo is making a lot of money. And who is he to dispute it? He is a star. Stars don’t dispute money.

That is when somebody chirps up, “If your son is Fresh Kid, doesn’t that mean you are Fresh Father?”

There follows a round of Kafunda laughter.

Then someone amends that… “No no, Fresh Daddy!”

The second round is more spirited.

For the next hour Paulo is referred to only as Fresh Daddy and they keep plying him with drinks.

The heights rise higher and higher and every one tries to say something more outlandish than the statement before. Because that is how kafunda kaboozi is. We pile rubbish onto rubbish.

Next thing you know know not only has someone said Fresh Daddy should also record a song, but be has agreed to do it. They have whatsapped a record producer and booked a session. They have called a boda, packed their liquor in plastic soda bottles and zoomed to the studio.

This is what I imagine happened. I wasn’t there.

But this is the only scenario that can justify the audio atrocity that is Mazike by Fresh Daddy.

It is of course, likely that Paulo is a teetotaller and and religious man, and that he was struck by inspiration on the road to Emmaus; it is possible that he was listening to the new Kendrick Lamar and caught the bug over the ether, it is possible that, tired of Minister Flo Rida’s nagging, he just decided to take the burden off his child and onto his own shoulders like any good father would. All these are plausible scenarios.

But I prefer the Kafunda one.

Because that song is awful. I am not saying you won’t like it. It is not awful like Bad Black’s song, or Zari’s song. Which were so dull we don’t even remember they existed. I just mentioned them two sentences ago and you have already forgotten them.

It is awful in the sense of No one intended to make a good song out of this. This was obviously a joke. This was a prank. This sounds just like a game a bunch of blazed fathers were playing with cheap studio equipment in a wooden shack in Kisenyi.

It sounds like a parody of a satire of a mockery of music, in that it is really bad.

But it is so much fun to listen to.

I would like to commend the government for banning satchets, in conclusion, because satchets allow Ugandans to drink bit by bit on the go. Without them, Ugandans have to go to kafundas, where they not only drink more, but they drink together, which can lead to such stupid ideas as Fresh Daddy’s Mazike and the resultant amusement of us all.

All hail our dear leader. May his person never be offended.

The Uganda People’s Defence Forces(UPDF) has announced the death of Maj.Oliver Zizinga one of the National Resistance Army historicals. In...

Muntu: “We may have lost a battle, but not the war to liberate Uganda”

Ssekandi:”Museveni’s victory shows that Ugandans still love, believe in him”

The keenly contested Ugandan election that saw the...

If your partner is only just good enough for sex, let them know