Statistics from the World Food Program show that 1.4 million people are suffering from chronic hunger and malnutrition and that these cases are common with women in the reproduction age(15-49years) and children below the age of 5 are under weight ,6% are wasted and 12% and malnourished.

It is from the overwhelming facts that the Nutrifish project has been launched to curb food insecurity and malnutrition in the country with a project that is going to run on the theme of “harnessing dietary nutrients of under-utilised fish and fish processing by-products to reduce micro-nutrients deficiencies in Uganda.”

The socio-economic and institutional perspectives have been highlighted as very important in assessing factors that impede the people’s access and consumption of underutilised fish and its products.

These constraints include attitudes, financial constraints, geographical and traditional issues myths among other that Joyce Akumu from National Fisheries Resources Research Institute Jinja said they are going to address. 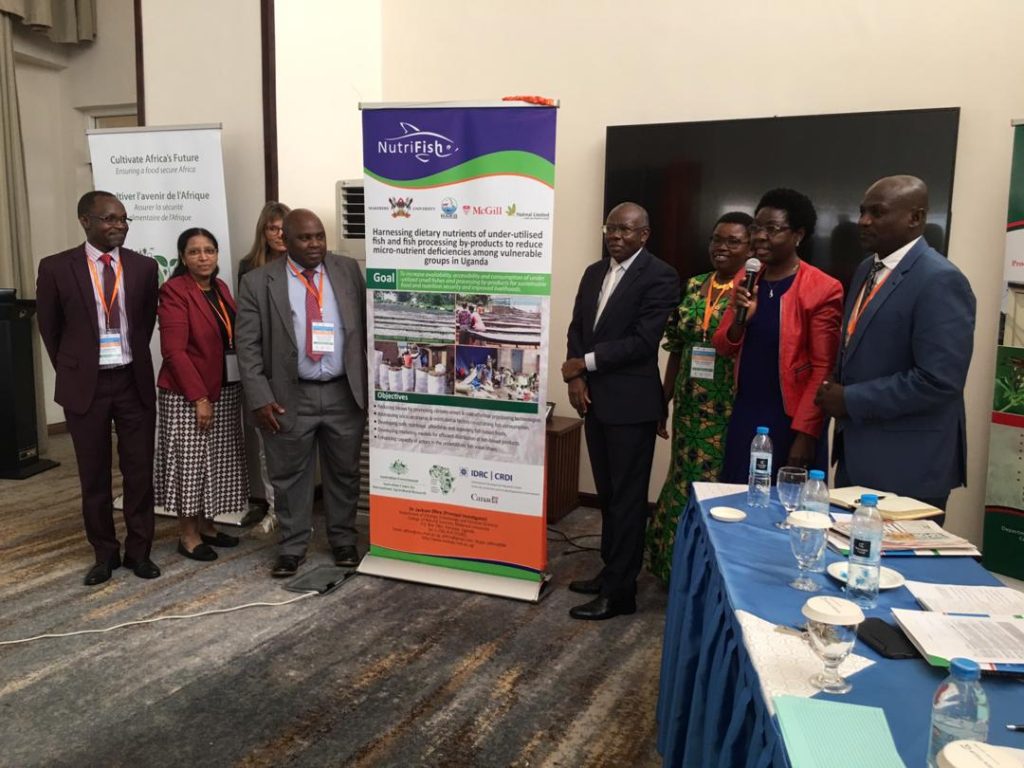 Their focus is to be on silver fish locally known as “Mukene” and under-utilised fish parts that are wasted after processing. Philip Borel the managing director of Greenfields Uganda Limited a fish processing industry said 50 percent of the fish parts like fish heads, skin fins and others that amount to 17 million tonnes remain here and this project has come at a right time to add great value to it.

He adds that fish products are good for the development of the brain for children below the age of 5 and advises that pregnant mothers should consume them more in all forms.

Dr. Bernard Bashasha the principle of the college of agriculture and science at Makerere university says that the unsubstantiated myths about silverfish commonly known as “Mukene” that it is for the poor and food for animals have to change.

“Those small fishes have great nutritional value than the bigger fish on the market, so these bad perceptions have to change” he said

Makerere university, McGill university of Canada, Nutreal Limited and National Agriculture Research Organisation are going to implement the project with a funding grant from development partners like Australian government, Cultivate Africa’s Future and the International Development Research Centre of Canada.

Makerere University set to open for freshers next week

Makerere University has announced that it will be opening for freshers on Saturday next week while continuing students will resume...

Makerere to rely on 300,000 alumni to raise shs15bn to rebuild Ivory Tower