North Korea’s Kim Jong-un and Russia’s Vladimir Putin have pledged to boost ties at their first ever summit.

The pair shook hands on Russky Island near the port city of Vladivostok, in Russia’s far east.

The Kremlin said the leaders would discuss denuclearisation, but Mr Kim is also expected to be seeking support after talks with the US collapsed.

The talks in Hanoi with US President Donald Trump failed to reach a deal on North Korea’s nuclear programme.

At their opening remarks the Russian and North Korean leaders referred to their two countries’ long history of ties and Mr Putin said he wanted to help calm Korean tensions. 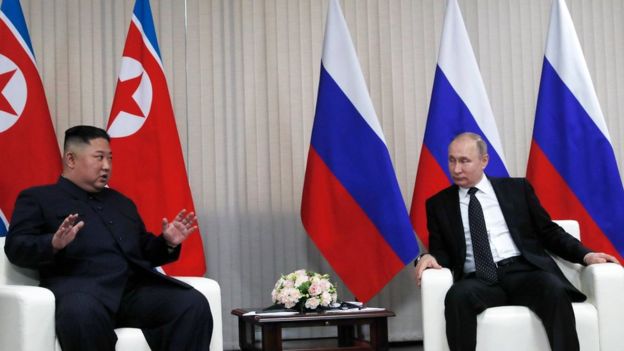 “I am confident your visit today to Russia will help us to better understand how we can resolve the situation on the Korean peninsula and what Russia can do to support the positive processes currently taking place,” Mr Putin said.

Mr Kim said he hoped for “a very useful meeting in developing the relationship between the two countries, who have a long friendship and history, into a more stable and sound one”.

The North Korean leader greeted Russian officials warmly when he arrived on Wednesday.

Mr Kim was entertained by a brass band before he got inside a car flanked by bodyguards, who – in now familiar scenes – jogged alongside the vehicle as it departed.

What do we know about the summit?

According to the Russian presidential spokesman Dmitry Peskov, the Kremlin believes the six-party talks on North Korea, which are currently stalled, are the only efficient way of addressing the issue of nuclear weapons on the peninsula.

Those talks, which began in 2003, involve the two Koreas as well as China, Japan, Russia and the US.

“There are no other efficient international mechanisms at the moment,” Mr Peskov told reporters on Wednesday.

“But, on the other hand, efforts are being made by other countries. Here all efforts merit support as long as they really aim at de-nuclearisation and resolving the problem of the two Koreas.”

What do both sides want?

This visit is being widely viewed as an opportunity for North Korea to show it has powerful allies following the breakdown of nuclear talks with the US in February, the BBC’s Laura Bicker says.

The country has blamed US Secretary of State Mike Pompeo for the collapse of the Hanoi summit.

Earlier this month North Korea demanded that Mr Pompeo be removed from nuclear talks, accusing him of “talking nonsense” and asking for someone “more careful” to replace him.

The summit is also an opportunity for Pyongyang to show that its economic future does not depend solely on the US, our correspondent adds.

Mr Kim may also try to put pressure on Moscow to ease sanctions.

Analysts believe this summit is a chance for Russia to show that it is an important player on the Korean peninsula.

President Putin has been eager to meet the North Korean leader for quite some time. Yet amid the two Trump-Kim summits, the Kremlin has been somewhat sidelined.

Russia, like the US and China, is uncomfortable with North Korea being a nuclear state.

The remains of late Burkina Faso President Thomas Sankara are to be buried where a memorial to him already stands,...