by Amon Katungulu
in Africa, News

The Red Cross says its deploying two major emergency response units to the port city of Beira in Mozambique to provide services for thousands of people affected by last week’s Cyclone Idai, one of the most destructive storms to hit southern Africa in decades.

One unit is expected to provide basic sanitation facilities for up to 20,000 people, and the other is expected to produce as much as 225,000 liters of clean water each day, enough to help 15,000 people struggling to survive the massive flooding that has followed the storm.

Jamie LeSueur, head of Red Cross operations in Mozambique, said in a statement that aid workers are most concerned about preventing the spread of waterborne disease. She said the emergency response deliveries will help protect against that.

“More help is needed, and we are continuing to do all we can to bring in more resources and reach more people,” she said.

Helicopters are conducting food drops over villages that were destroyed and cut off from the outside world after the cyclone hit Beira, then swept inland to neighboring Zimbabwe and Malawi. Aid officials say an untold number of survivors are clinging to treetops or are trapped on rooftops of houses that remain submerged by floodwaters.

The combined death toll in Mozambique, Zimbabwe and Malawi has risen to at least 437 people, a number that is expected to climb as the floodwaters recede and search crews enter the damaged areas.

The U.N. says the official death tolls from the governments are: Mozambique, 242; Zimbabwe, 39; and Malawi, 56.

President Filipe Nyusi of Mozambique has said he expects the death toll to exceed 1,000 in his nation alone. Mozambique began three days of official mourning Wednesday. 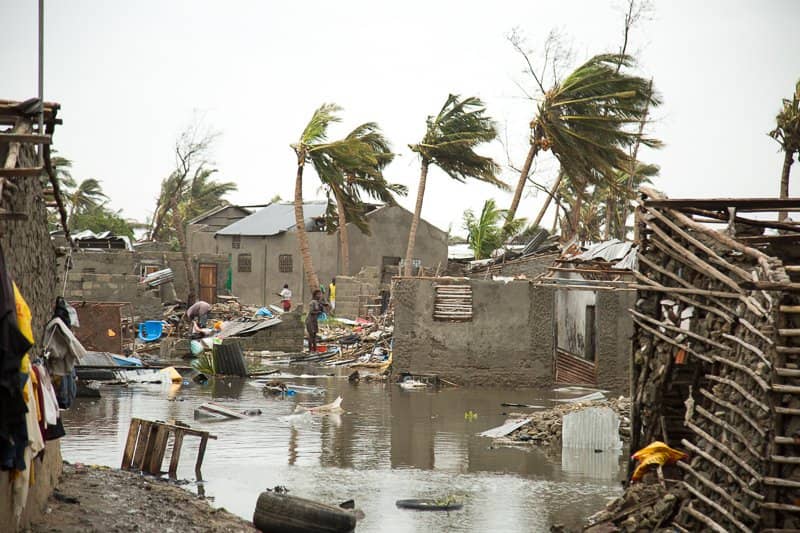 Aid agencies said they were prepared for the cyclone but not the massive floods that followed. Mozambique was hardest hit as a result of rivers flowing downstream from its neighbors.

In Beira, Manuel Jeque Francisco said he hopes to rebuild the private Young Leaders School that he directs. It serves 150 students from preschool through third grade.

“Since my school was all destroyed,” the 30-year-old told VOA in a phone interview, he has begun a fundraising campaign on his Facebook page.

“Just help us bring back the smiles of our students,” he asked.

The U.N. World Food Program said it was transporting enough aid for 600,000 people across the three nations. The U.N. said it has allocated $20 million from its central emergency response fund and urged other donors to contribute.

“Now that the flood waters are coming down, we are shifting to a different stage in the response,” said Gemma Connell, the head of office of the U.N.’s humanitarian regional office for Southern and Eastern Africa. “This stage is that we have to get the response that we can to everyone in need through a combination of air and on ground, but we have to do that cognizant of the restraints we face.” She said aid workers need fuel and other essentials to keep the response operation running smoothly.

The African Union has contributed $350,000 to the three storm-stricken countries. The European Union announced an initial aid package valued at nearly $4 million. Britain and the United Arab Emirates have also promised aid. The Indian Defense Forces have sent a medical team and South Africa’s Air Force has been assisting with search and rescue operations.

The U.S. State Department said the United States is supporting relief efforts “in coordination with our partners.” The U.S. Agency for International Development said in a statement Wednesday that it “has mobilized $700,000 in total assistance to support emergency water, sanitation, hygiene and shelter needs in Mozambique, Zimbabwe and Malawi.”

In Zimbabwe’s hard-hit eastern province of Manicaland, a teacher in the city and district of Chimanimani said the cyclone has left him “totally traumatized at the moment.”

The man, who declined to give his name in his voicemail account for VOA’s Zimbabwe Service, said he was sleeping when the rain began during the night. Then came strong winds, he said.

“That wind is what brought the heavy volume of water. … I don’t know how we managed to escape, but we managed to survive with the kids, but it was tough. There were other people who were with us at the school. It hurt, I don’t want to lie to you!”

The cyclone also has uprooted Mai Manzu, whose home was in Buhera, another district in Manicaland.

“My house was taken by Cyclone Idai,” she said in a voicemail, adding that her uncle also lost his home. Both had been staying in Gutu to help ailing relatives. While they were gone, “Everything has been washed away, including the food.”

While Zimbabwe’s President Emmerson Mnangagwa and his administration have faced criticism over an alleged lack of preparedness for and slow response to the crisis, a caller in Bulawayo expressed only gratitude.

“Really, they are trying and the guys are on the ground, trying to do everything,” a man named Mokem said in a WhatsApp voicemail to VOA’s Zimbabwe Service. “… But of course there are some people who will always find wrong things out of everything you’ve done. I want to thank the government of Zimbabwe, I want to thank Mnangagwa for the effort. I mean, it’s evident that he’s trying, left, right and center, to help the situation.”

The Southern Africa Development Community (SADC) is concerned about a nonmember country's deploying soldiers in the region without its approval...

President forgives two for abusing him on social media