by Amon Katungulu
in Africa, News

Hundreds of trucks transporting food and humanitarian assistance to the Central African Republic are blocked at the border with Cameroon, as rebels have cut off the road to the capital, Bangui. The rebels acted to protest the president’s new cabinet, which they say is not being representative enough.

Among the 230 trucks and more than 500 drivers stranded in Garoua Boulay was Kum Aki, 54, who was transporting rice, maize and vegetable oil to the troubled CAR. He said most of the drivers had exhausted their $200 to $400 allowances they were given to cover the distance within a maximum of 10 days.

“We are almost about 10 days here. … You have eaten, you have paid hotel bills and all this. So now we are short of money,” he said.

Alex Nseumen, president of the CAR transport trade union, said he crossed the border but was asked to return.

He said that when he crossed the border, he was told that CAR rebels had blocked the road at Nzokombo, 14 kilometers from the town of Garoua Boulay. He said he was expecting his boss to send additional funds so he could take care of himself and the assistant driver.

Garoua Boulay residents have complained of the mass movement of panic-stricken CAR residents across the border, expressing concern it may escalate. 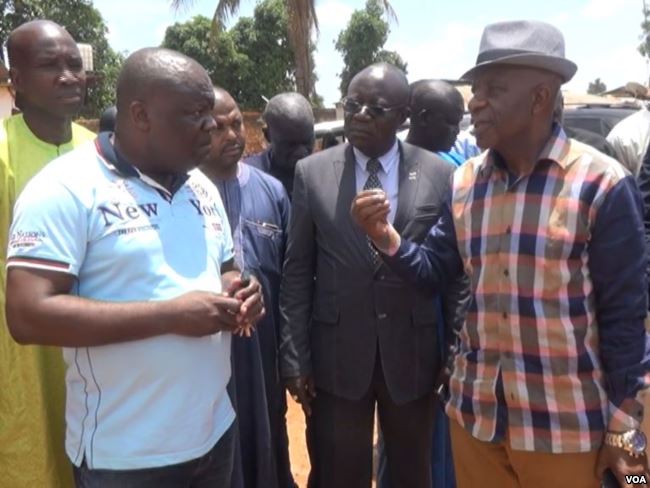 In a crisis meeting Monday, Laurence Diyem Jam, the highest-ranking government official in Garoua Boulay, assured the population of their safety and said the military was controlling the border.

El Hadj Oumarou, Cameroon coordinator of the land freight transportation bureau, visited the drivers and thanked the government of Cameroon for assuring their safety.

He said he was very happy that the government had secured the trucks, goods and lives of the stranded drivers despite the tension their presence is causing in Garoua Boulay. He said they had not documented any incidents that would be a threat to anyone’s life.

Landlocked CAR depends on Cameroon’s Douala seaport for about 95 percent of its supplies.

Etienne Mbonjo, director of Catholic Church Health Services in CAR, said patients might begin to suffer soon, if drugs meant for Bangui remained in Cameroon for another week.

He said it took courage to meet the rebel groups, though negotiations failed to open the border. He said health and humanitarian needs were increasing daily and that the United Nations should take note.

CAR rebel groups accuse President Faustin-Archange Touadéra of failing to comply with a 2018 peace agreement that required a government with representatives from all armed groups. Only six of the 14 groups that signed the deal have members in the cabinet.

In recent years, the debate over who will succeed Cameroon's long-time president, Paul Biya, has become a point of political contention....

Doctors warn Russian opposition leader could starve himself to death

This week, in awake of death of Chad’s...

Big Interview: “We were not ready for the elections,” says Gen Muntu

I am pregnant! Oh God