by Nabaasa Innocent
in News

The Uganda Wildlife Authority (UWA) has taken up the prosecution of two Vietnamese nationals who were recently arrested by Uganda Revenue Authority security personnel after being intercepted chattering trucks of smuggled elephant trucks and pangolin scales at Elegu border.

According to a statement from UWA Communication manager, Bashir Hangi, Mr. Dhan Yon Chiew and Mr. Nguyen Son Dong will be charged in the Standards, Utilities and Wildlife Court for possession and illegally trafficking wildlife products contrary to the provisions of the Uganda Wildlife Act Cap 200.

“Uganda Wildlife Authority commends Uganda Revenue Authority and all other agencies that were involved in the operation that led to the arrest of the suspects and seizure of the wildlife species for their vigilance and commitment to fighting illegal wildlife trade which is further endangering Uganda’s wildlife resources,” the statement reads in part.

“We will continue to work with our sister agencies to ensure all those involved in the illegal trade are brought to book. With the cooperation from all relevant agencies, illegal wildlife trade will be stamped out of Uganda and we shall continue to conserve for generations,” the statement continues.

UWA Executive Director Sam Mwandha says that the case offers UWA an opportunity to establish the source of the ivory and pangolin scales that the suspects were found in possession of. It also provides us an opportunity to tell the world that Uganda will not tolerate illegal wildlife and wildlife product trafficking.

“We have been internationally labelled a conduit for illegal trafficking of wildlife and wildlife products, ruining our reputation on the world stage. We shall use this case to show our resolve to stamp out this illegal trade. While URA handles the case in regard to possession of prohibited products, we will handle it from a different angle”Mwandha says. 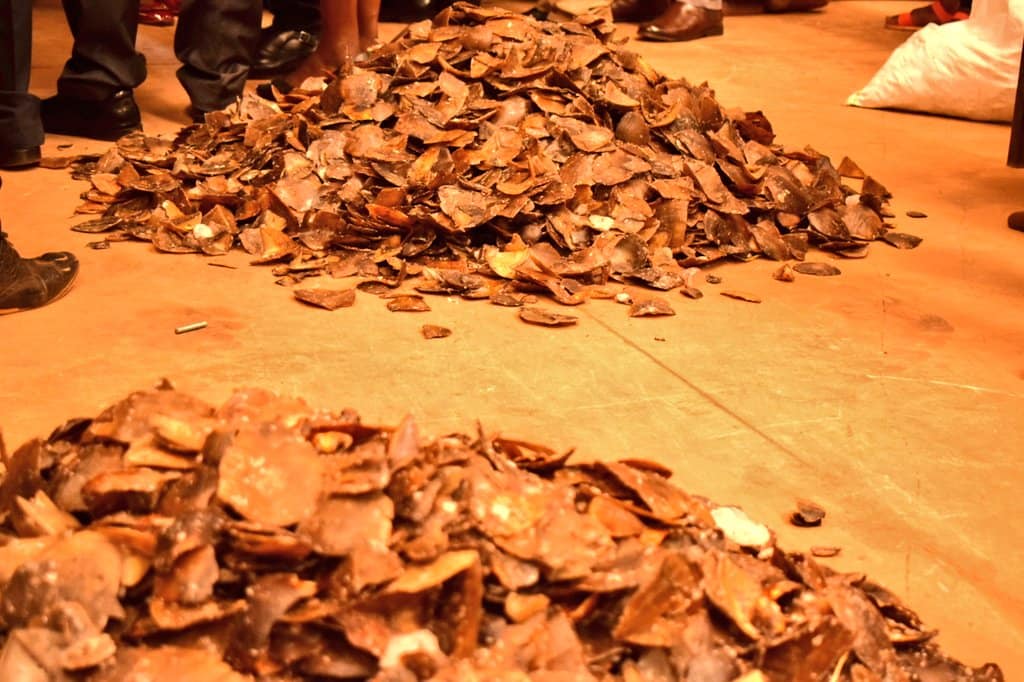 He further clarifies that given the increasing number of wildlife and the fact that Uganda Wildlife Authority can account for elephants in Uganda, it is most probable the contraband came from poaching of wildlife in neighbouring states. UWA intends to undertake DNA analysis to establish the source of the ivory with a view of working with the relevant authorities to address poaching.

Dickson Kateshumbwa, the Commissioner Customs said the smuggled goods were nabbed at Elegu border coming from Democratic Republic of Congo.

It is believed that they were transiting through Uganda to Vietnam.

Following a tip off from the intelligence, two Vietnam nationals were nabbed with three containers each carrying over 750 pieces of ivory which are estimated to be from over 300 elephants and yet to be identified tones of pangolin scales.

Kateshumbwa said at Elegu border, the scanners gave them confusing pictures which forced them to do a detailed search.

At least one person has been confirmed dead and property worth billions destroyed in a fire incident that happened in...