The Roman Catholic Church is in the process of beatification of the only woman believed to be among the Uganda Martyrs but missed canonization in 1964 when the 22 martyrs were glorified.

Clara Nalumansi, also knowna as Kalaala, a biological sister to the then Kabaka of Buganda Muwanga 11 signed her death certificate the day she became an active religious loyalist in direct opposition to her earthly King.

Usually, the chronicle of the Uganda martyrs is often a story about the brave men who weathered torture, intimidation and met death because of their religious beliefs. Uganda’s antiquity has however deliberately skipped a brave woman due to the prejudice of the times. 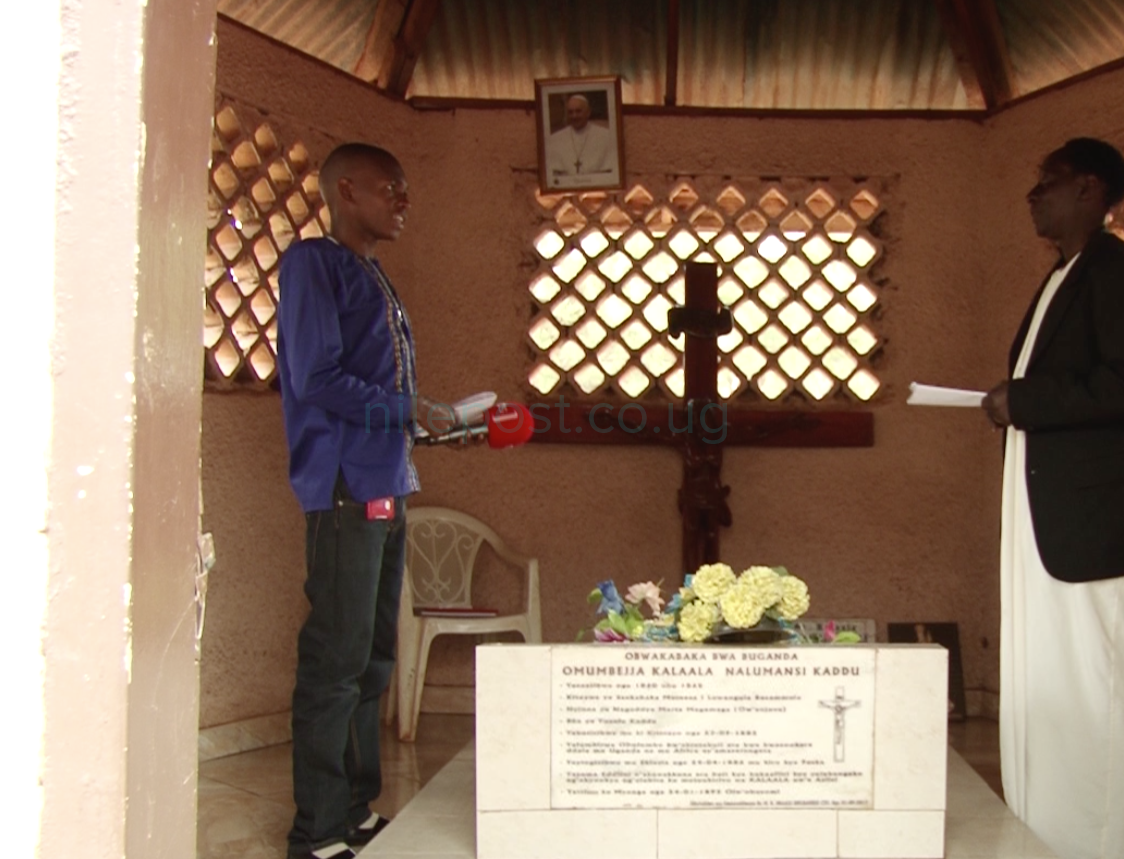 However, a walk in, at the Kazo based Emmanuel Collage School leads one to a small tomb at the middle of the of the school compound; in a place that also holds St. Clare Catholic Sub-Parish which was named after princess Clara Nalumansi the unsung martyr.

The tomb looks well kempt, a constant reminder that least here she is treasured, painting Nalumansi’s life as that of the 22 canonized Uganda Martyrs. The scenic view before one stretches out in silent contemplation of her life in the middle of a Catholic founded school.

Joseph Kagima Ngabo, the care taker of the tomb, also a catechist at the Sub-parish here, shares what is known of Princess Clara Nalumansi.

Kagimu narrates that Princess Nalumansi first converted to Christianity then she changed her mind and crossed to the Roman Catholic Church after getting g married to a one Joseph Kaddu who was already a Catholic.

Ngabo believes that Nalumansi’s troubles began when Kabaka Mwanga started to hear rumours that Princess Nalumansi was in cohorts with French Catholics and some traitors in the Mengo administration to try and overthrow Mwanga.

Ngabo says that Mwanga, who was already paranoid about the intent of the new religious orders in his country came to believe that it was only a matter of time before Buganda would be ruled by a woman just like the Kingdom of England was. England at the time was ruled by Queen Victoria and Mwanga feared the Catholics might want to install Princess Nalumansi here.

Despite sometimes having sympathy for the new religions, Mwanga would not tolerate challenge to his authority. Even as he ordered for the execution of all those who did not renounce their belief in Christianity, Mwanga was said to be troubled that this would sweep along his own blood relatives.

Some historians even claim that Kabaka Mwanga had a change of heart about executing Princess Nalumansi and ordered she be spared at the last minute even when she had not renounced her faith. However, the order was delivered late. The executioners could only reply to the messengers from the Kabaka, ‘Obwayise, tebuyoleka.’

Whiling celebrating 52 years of the Kampala Archdiocese last month, Archbishop Dr. Cyrian Kizito Lwanga, revealed that on his recent visit to Rome to see Pope Francis, he had received the good news about Princess Clara Nalumansi’s beatification process. Archbishop Lwanga said, “The Pontiff gave a green light to procedure with the process and I have confirm that the last document in the first stage will be received by the pope this month.”

If the wish is followed, the unsung, Clara Nalumansi also called Kalaala will join the 22 already canonized Uganda Martyrs as the only woman.

Human rights aside, the burning of the “Uganda martyrs” was another power struggle

Louis Namwanja Kizito Instead of blaming Kabaka Mwanga for burning the Uganda martyrs, with the benefit of hindsight of human...